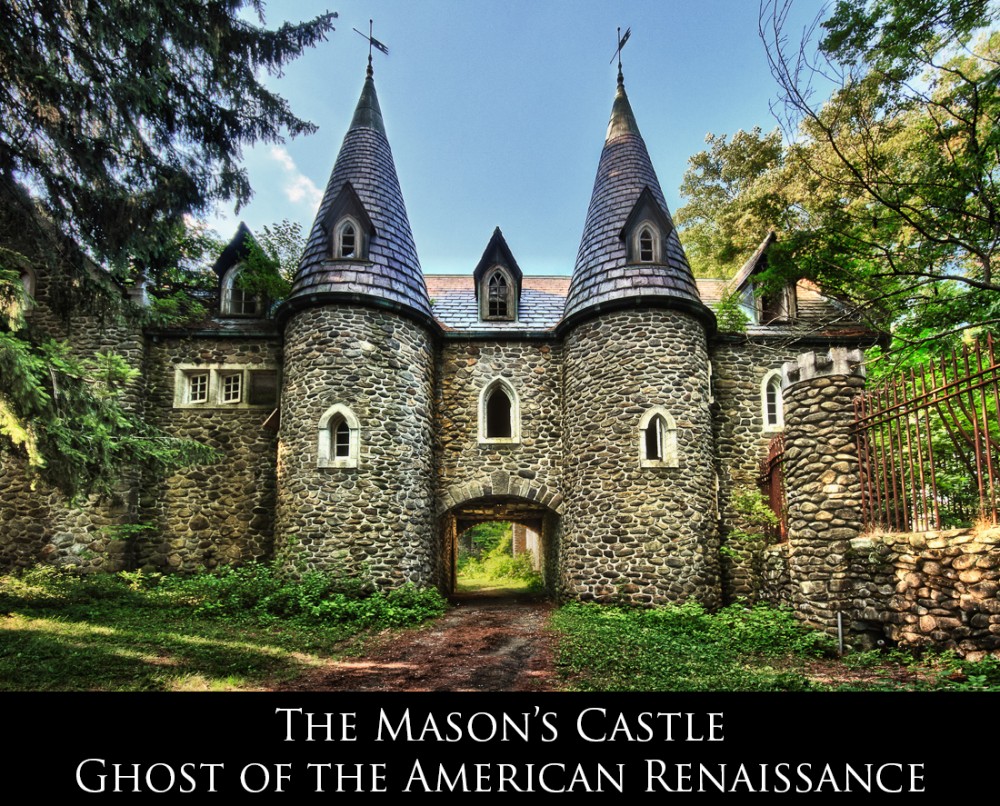 “The thing that fascinated me about the castle is that everybody thinks that it’s haunted, that people were locked up in the courtyards…None of its true. What did strike me as very unusual is from the time that I’m able to record; no one has ever been able to live on that land. That struck me as bizarre.” – Dr. Joyce Conroy – Historian

When I first heard about an abandoned castle in upstate NY I all but booked my plane ticket before even researching it! The prospect of exploring a castle deep in the overgrown woods of NY was irresistible.  I started researching and making phone calls, and in doing so made contact with a local historian who had done extensive research on the castle and its history. Her name was Dr. Joyce Conroy and she not only provided us with useful information, she also gave us a 35 minute interview in person, and also gave us copies of historical images of the castle for us to you in our write up and video. Here is some of what  we learned from her:

Before the castle was constructed, a small hunting lodge called the “Beaverkill Lodge” was built on the almost 1000 acre plot of land. This was built by Bradford Lee Gilbert in the late 1880’s. Gilbert frequented the lodge only once or twice a year and only for a few days at a time. When Ralph Werts Dundas bought the land in 1915, he constructed the castle on  and around the original lodge and then expanded it out from that. 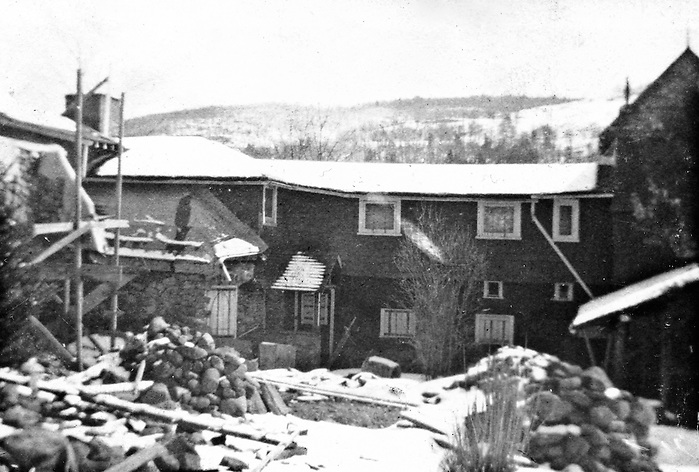 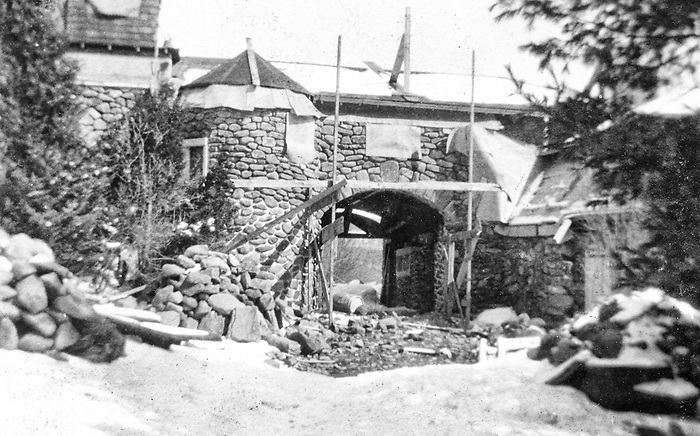 Gothic windows, turrets, towers, and steep parapeted roofs are just a few of the beautiful architectural features that make the castle an amazing oddity to find hiding in  the woods.  R. W. Dundas was a bit of a recluse but he had money, and dreams of being a Scottish laird. He was married and had a child. His wife was very emotionally disabled, and his daughter was taken care of by a number of nannies.  They visited the site  while construction of the castle was going on but they never  lived there for any length of time. A great deal of money was spent on the inside of the castle. Electricity and steam radiators  were installed in almost every room, an  incredible luxury at the  time. In addition to marble floors and countertops, and porcelain tiles,  there were also reports of a gold leafed  fireplace in one of the rooms. 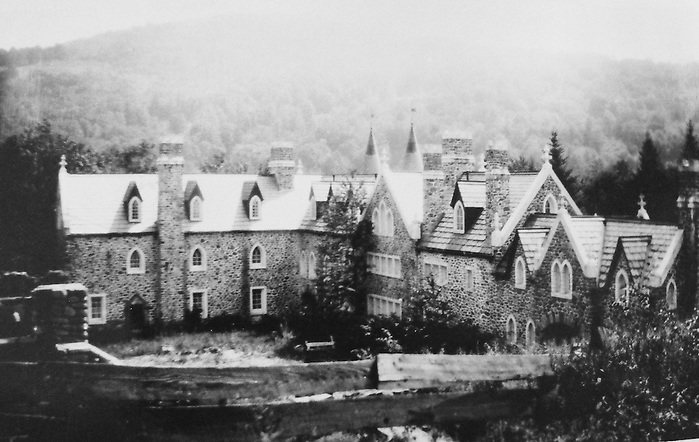 However in 1921, before the castle could be completed Dundas died, leaving a reported fortune to his wife and daughter. Unfortunately, after his death, his wife was then taken  to a sanitarium due to  her existing mental illness. The daughter was suddenly  extremely wealthy and in need of a guardian. The castle caretakers who were watching over the daughter,  basically robbed her blind. She went  on to get married and eventually headed  over to England with her husband on an expedition to find “St. John’s Gold”. The expedition fell apart when eventually they fired the historians and scientists helping in the search, and hired a dowser/mystic with a willow wand. At this point the daughter’s mental health was called into question and she was subsequently placed in a  sanatorium in England.   The castle changed hands a few times over the years and is now owned by the Prince Hall Mason’s.

I flew up to NY and met up with fellow photographer A. D.  Wheeler, and his colleague Jon. We set out on our first day of exploration with the castle set in our sights. We made the trip from Elmira to the site of the castle without knowing much about how to get in or even its exact location. We neared the castle and after a few miles of  unmarked back roads we spotted one of the towers of the castle up on a hill buried deep in the woods and overgrowth. After parking our car and gathering our gear, we trudged up a steep ravine and into a clearing which revealed the outer bulwarks of the castle. It’s gothic windows and ‘witch’s hat’ spires that adorned its towers loomed through the trees and immediately hinted at the mystery and fantastical stories that this location might hold. 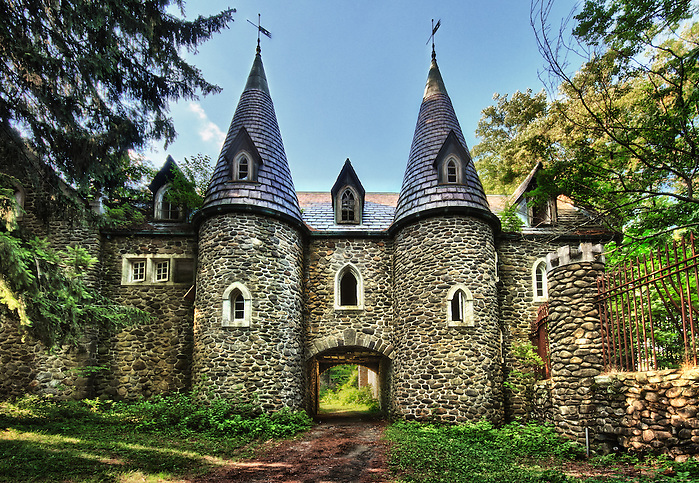 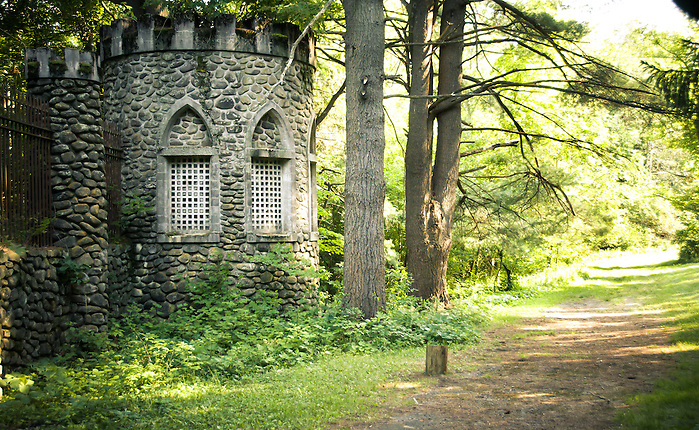 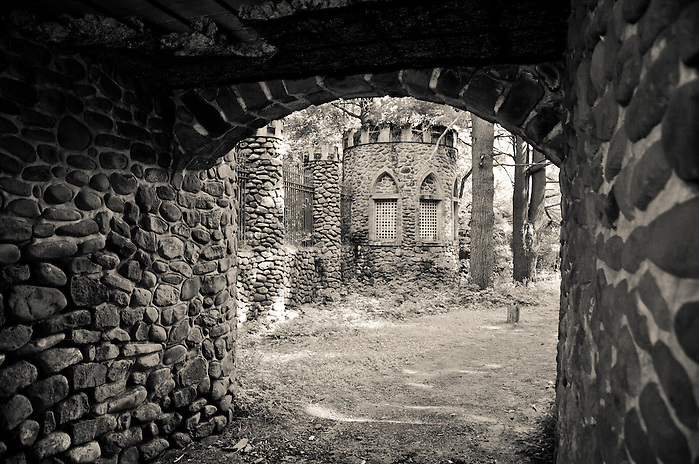 We quickly ducked in under a beautiful stone archway and into the sprawling courtyard. We all stood in awe of what we were seeing. It was like being transported back to medieval times, as if somewhere in the woods we stepped into Narnia without knowing it. I quickly checked my back to see if any talking beavers or goat-men named Mr. Tumnus were sneaking up on me!  🙂 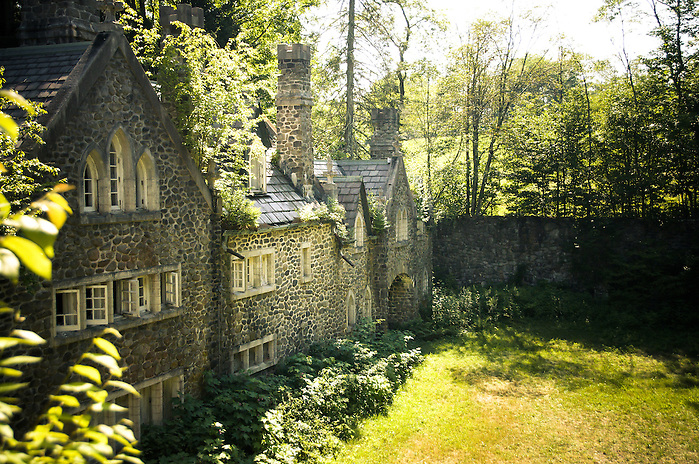 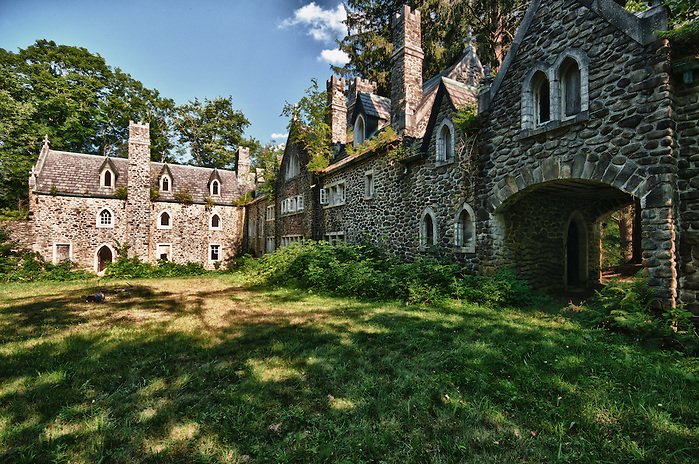 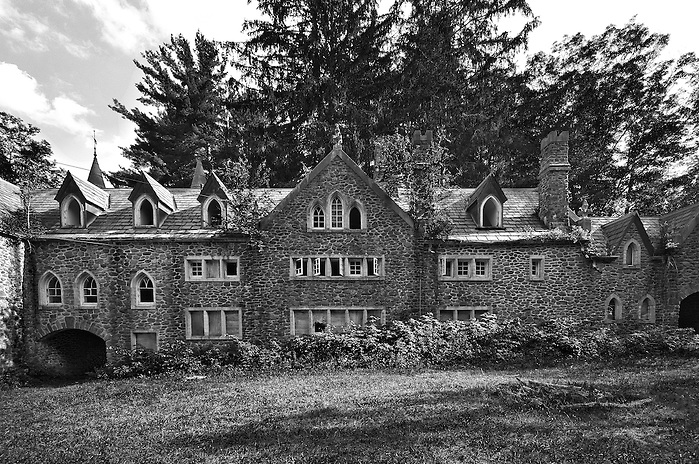 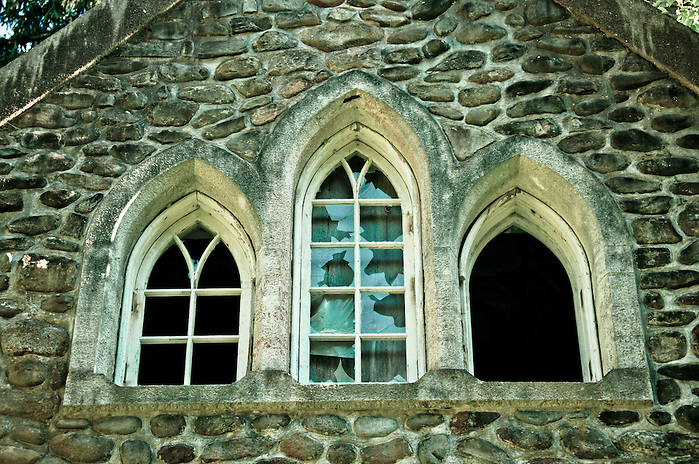 After taking in the awe-inspiring architecture of the inner courtyard we ducked into the first open doorway we saw, and found ourselves in the kitchen of the castle. Tiled floors and marble window sills surrounded  us. Every window and door we encountered was beautifully peaked, and every corner we rounded and room we entered spoke of mystery  and an untold history. 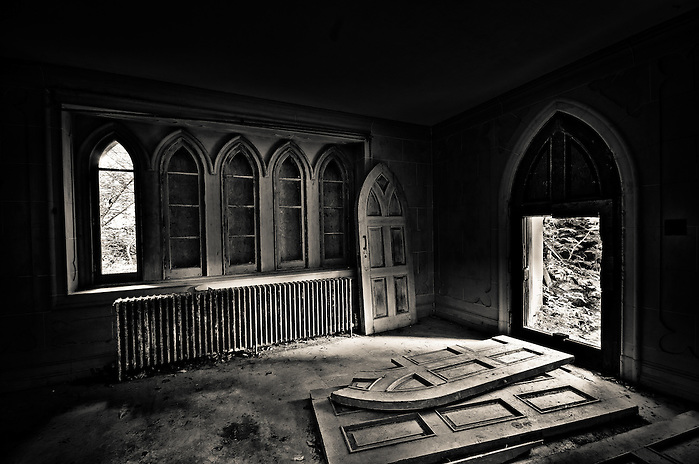 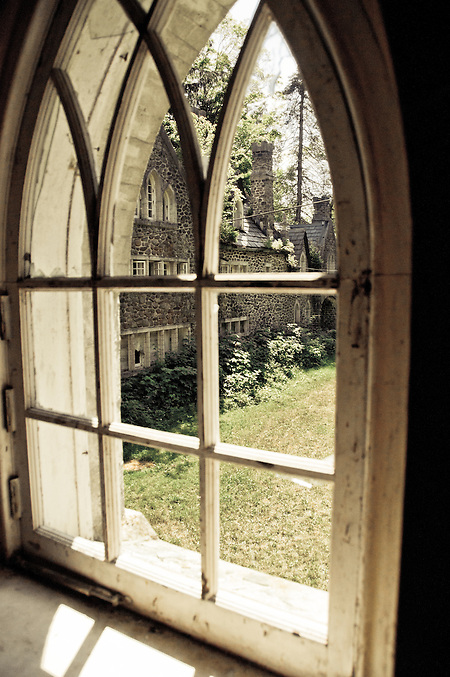 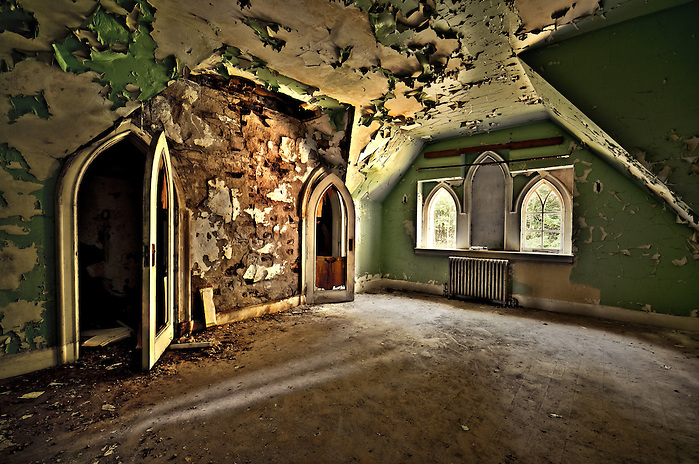 It was a strange juxtaposition to be exploring the hallways and rooms of what one would imagine to be a castle out of the dark ages and then notice an old push button switch on the walls which was once used to turn on the electric lights. It was like a modern day fairytale gone wrong. I felt like Alice going through the rabbit hole discovering crazy distorted visions of reality that immediately clashed with my senses and perception of what should and should not be. 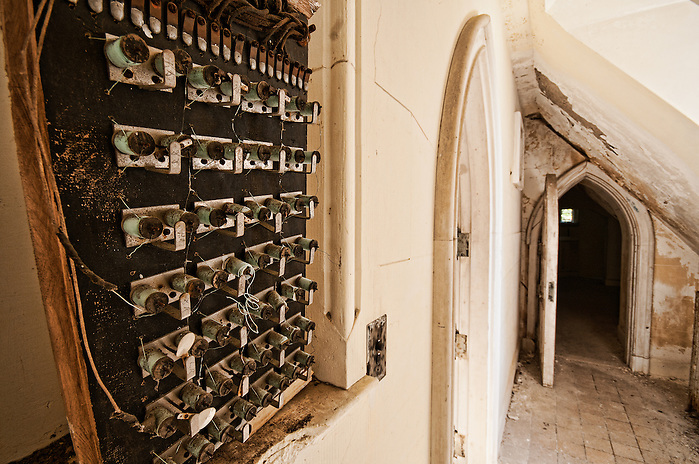 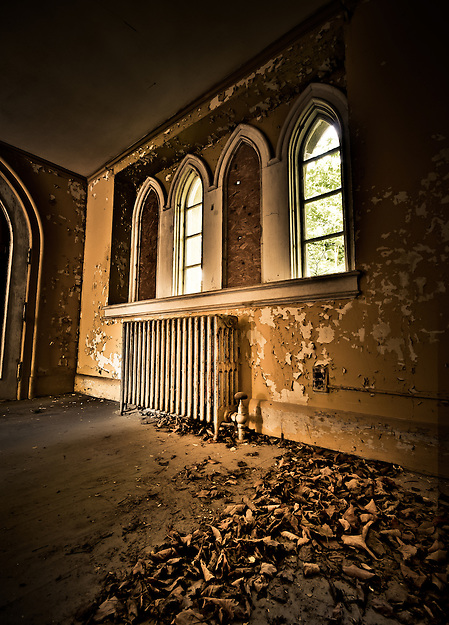 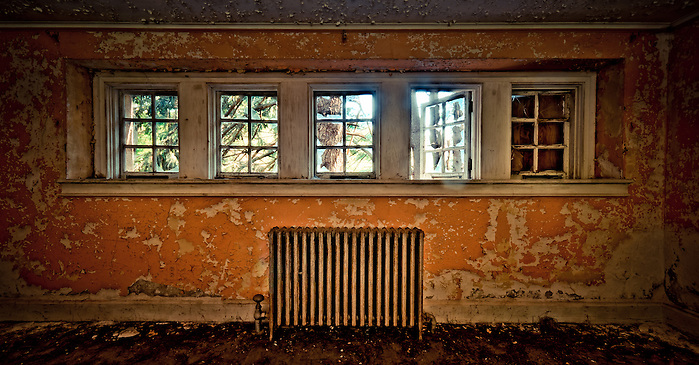 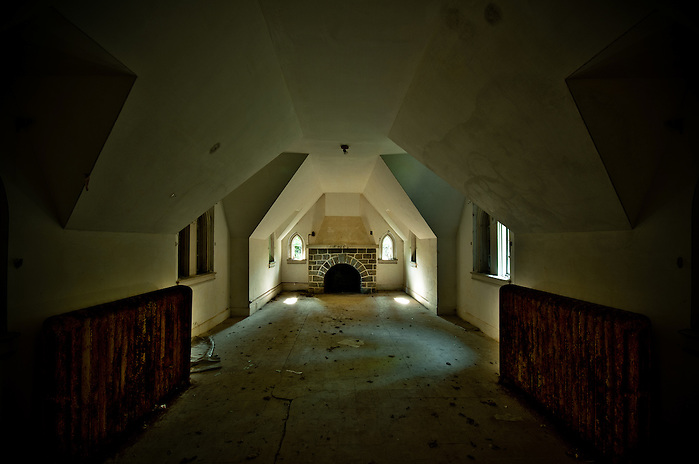 The majority of rooms were completely cleared out of anything that would have resembled human habitation . The only vestiges that remained were bathroom fixtures, and electric heaters, which only furthered the surrealistic perception that what appeared to be something from the dark ages was still indeed a modern ruin. 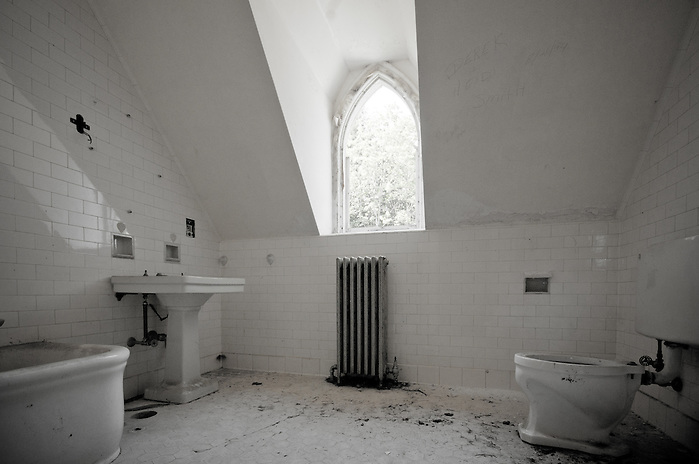 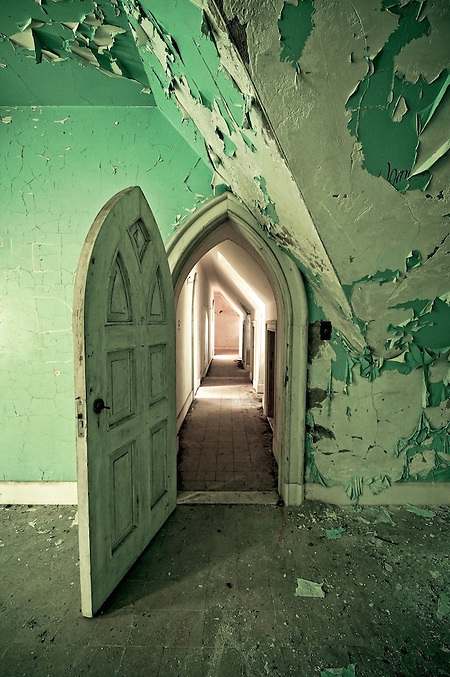 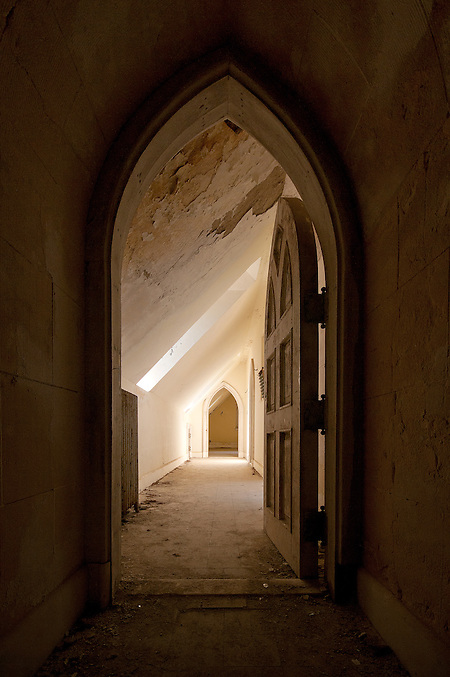 We explored all three main levels of the castle, poking our heads into every room, and even ventured down into the depths of the blackened basement. We spent hours peering into abandoned rooms and speculating on the stories and history that the castle held. 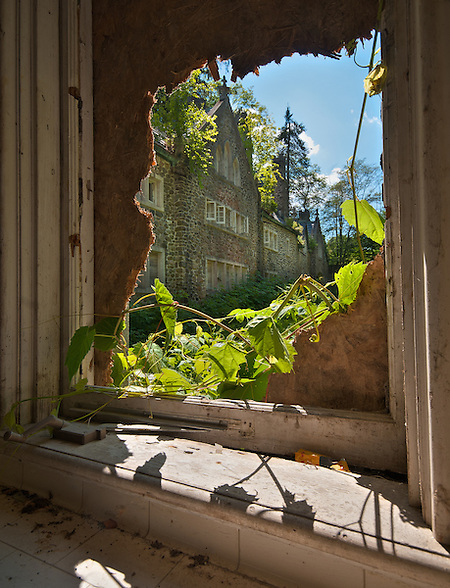 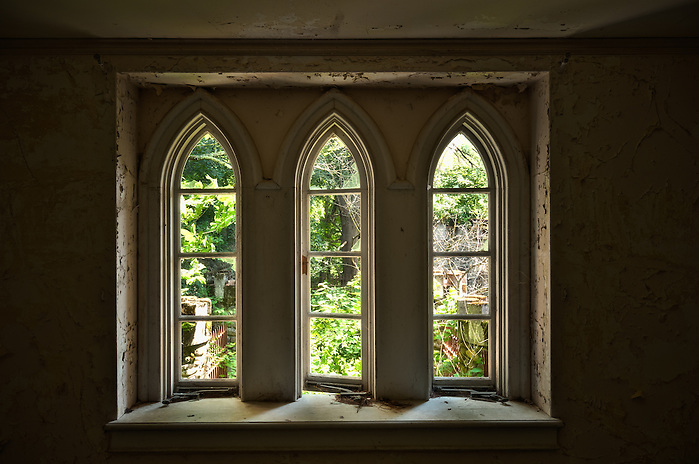 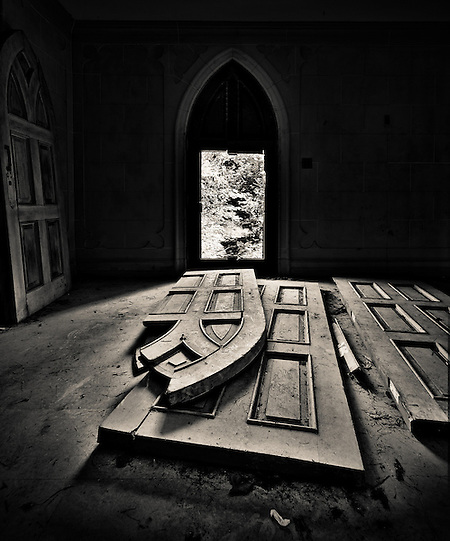 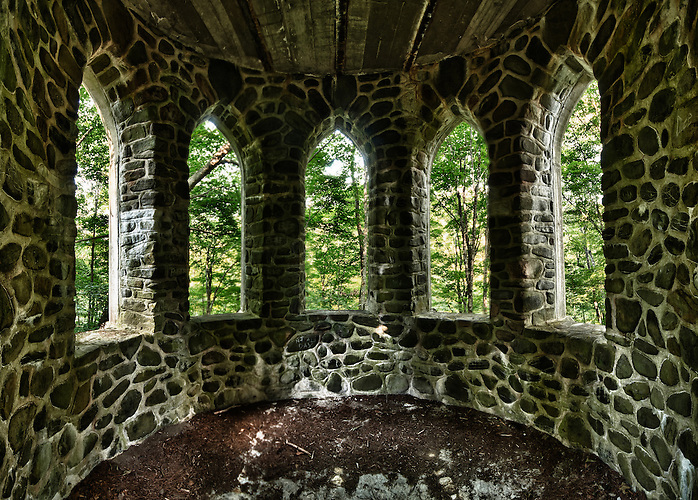 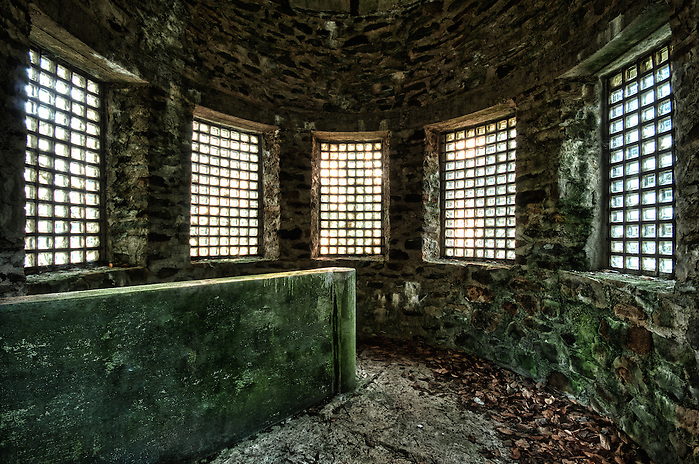 A few days later we had the  honor of speaking with  local historian Dr. Conroy who donated her time to give us a full interview and history lesson regarding the castle. There are very few websites dedicated to this location and many of them contain historical information that is not entirely accurate. We were able to talk with Dr. Conroy to uncover what was myth and what was factual. She was very generous and donated a number of digital scans of old historic photos of the castle. 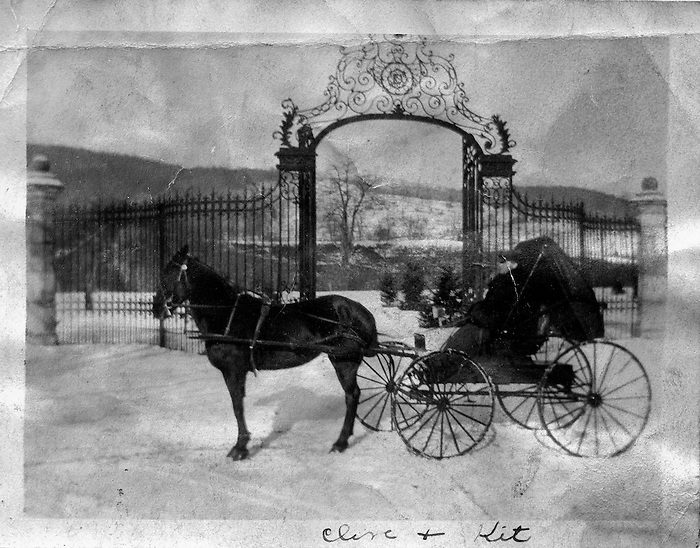 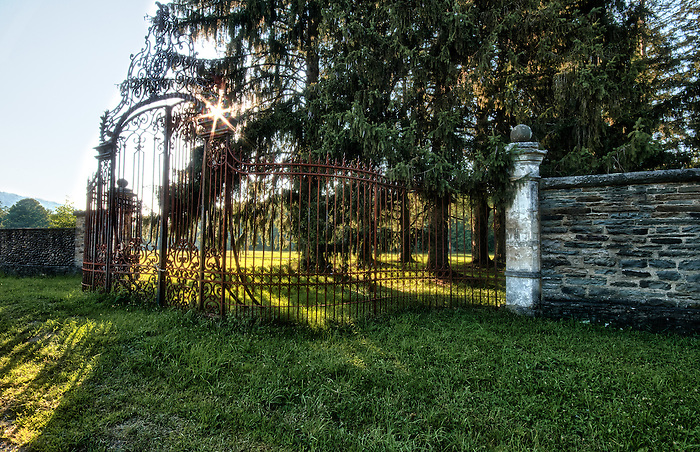 The Mason’s Castle was an incredible location and a true gem of American history. Please note that due to the fact that the land is actively owned I am unable to disclose the exact location of the castle or provide any information regarding gaining entry. Please do not attempt to visit this location, as it would be considered trespassing. I hope you enjoy the photography and the history!