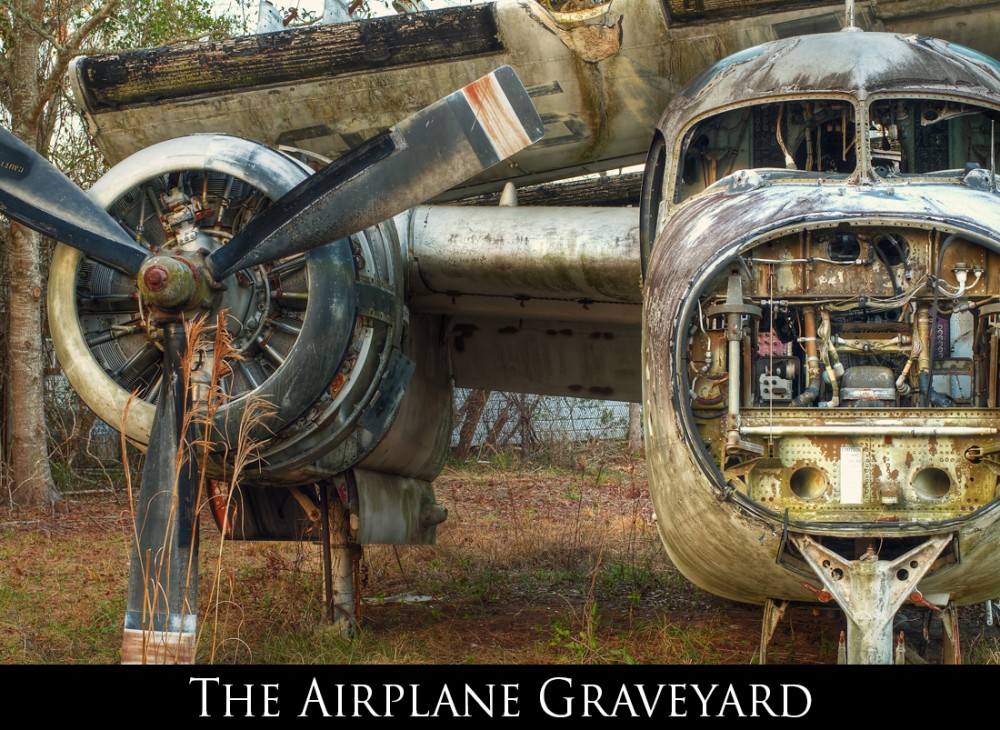 *Please note, the Airplane Graveyard was destroyed in May of 2011.

The planes are no longer there*

I was in Gainesville, Florida this January to visit one of my best friends, Casey to see his performance in the play Closer. While there, we made plans for a trip to St. Augustine (his hometown) to do some head shots for him and to seek out interesting locations. I had seen a picture on Flickr of an old abandoned airplane near St. Augustine. We did some research and found Agnes Lopez. She specializes in wedding photography, but she had done a photo shoot at the location we sought. I emailed her asking directions. Not 30 minutes after I clicked send, she called me and was more than happy to point the way, but not before warning us that it was on private property and we should be careful. (She was very friendly and her photos are brilliant!http://news.agneslopez.com/) We later learned that the planes are Grumman S2 Trackers, naval bombers from 60’s and 70’s. They were one of the first aircraft designed to combine the detection equipment and armament to hunt and destroy submarines while operating from aircraft carriers. These particular planes (the S-2C’s) were outfitted to preform photo reconnaissance work as well. The planes and property are owned by a local man who had bought them and stripped the parts to sell to the local Grumman company.

The next day Casey and I set out on a mission to get him some rockin’ head shots and to find this airplane. We pulled up in the parking lot of the pier on St Augustine Beach and the familiar cool crisp smell of the ocean filled my nostrils. Casey had 4 pictures of himself that were taken about 10 years ago at the same location and one goal for the day was to recreate those shots. An hour and a couple hundred shots later we started packing up, but not before meeting and talking to Casey’s sister and mother who joined in a few of the shots.

After lunch at the Gypsy Cab Café it was time for the airplane. Casey called a friend who said he knew exactly where the planes were. PLANES? There was more than one??? Yes, according to Greg, there were at least eight! With my energy and excitement now ramped up, imagining what this place might look like, we picked up Greg in a CVS parking lot and headed off.

Not five minutes down the road we saw the giant tail fins of an entire graveyard of old war planes looming across the highway from us, and sure enough there were many of them in plane sight (sorry had to do it…). 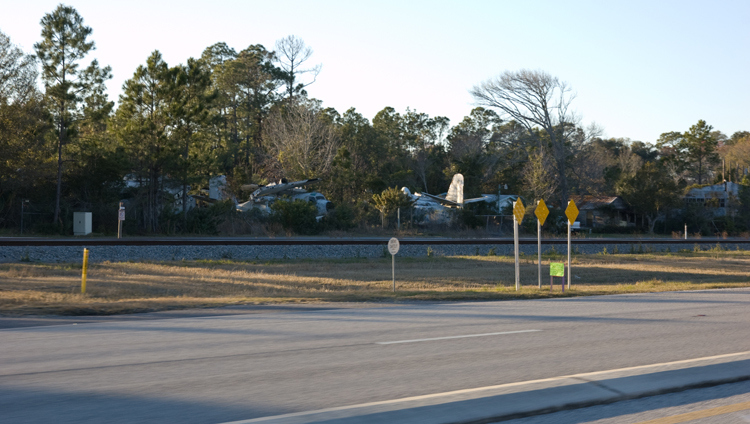 We U-turned and made a slow trip past the fenced property. I noted that there was not a single ‘NO TRESSPASSING’ or ‘PRIVATE PROPERTY’ sign anywhere. Greg spotted a large opening in the chain-link that provided easy access to the planes. Equipment ready we parked and slipped quietly into the overgrown lot.

As we stepped through the brush we walked on and around old pieces of the planes, tires, wings, control boxes, and the occasional beer can. At the first plane I came to I saw that, being aircraft carrier planes, the wings were folded over the top. The engines and propellers had been removed from this particular plane and the nose was missing, but the fuselage was intact. 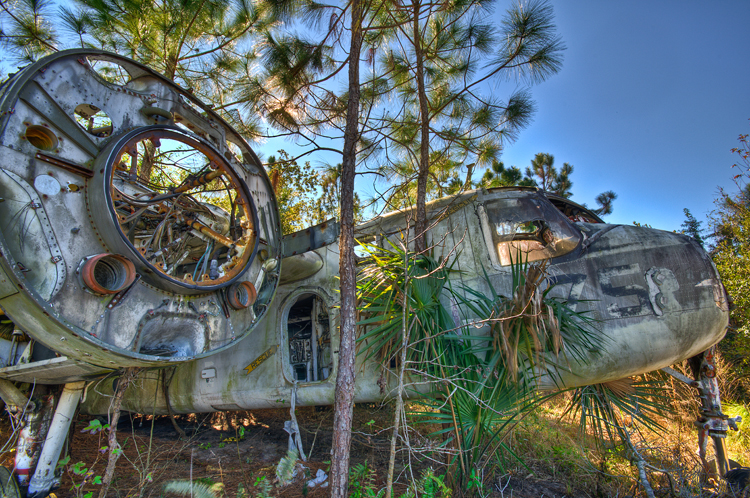 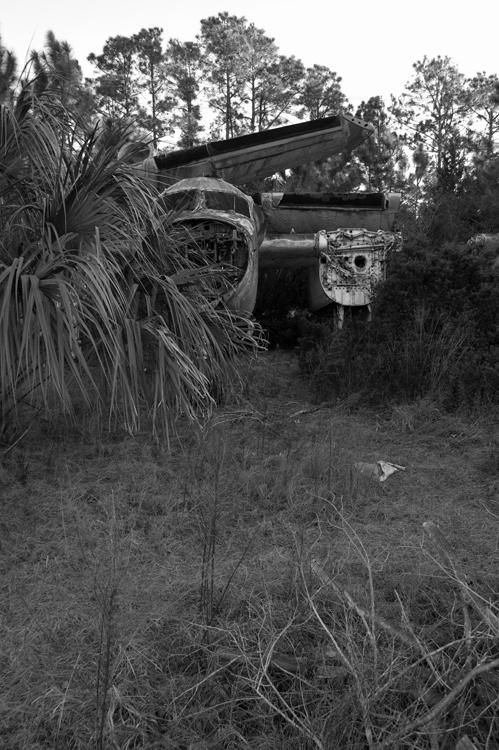 As we walked under the wing, we came to a small access hatch that was barely big enough for a hobbit to step through without ducking. 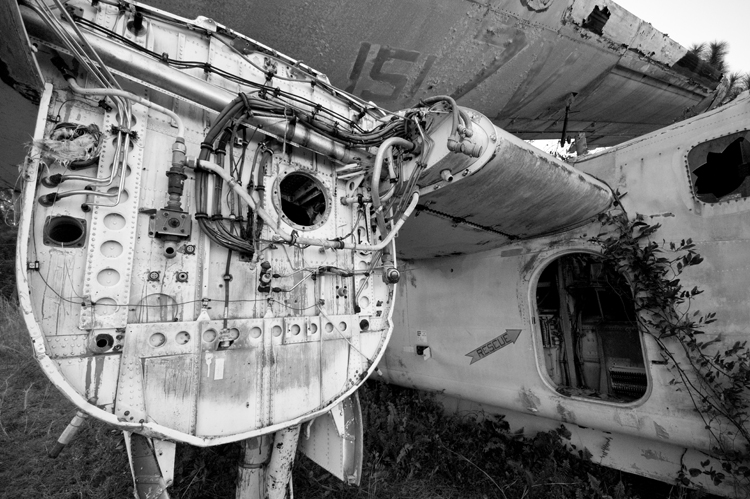 I stuck my head inside the plane and looked around. The interior of the midsection of the plane had been stripped of all equipment leaving bundles of wire hanging from empty compartments like jungle vines. 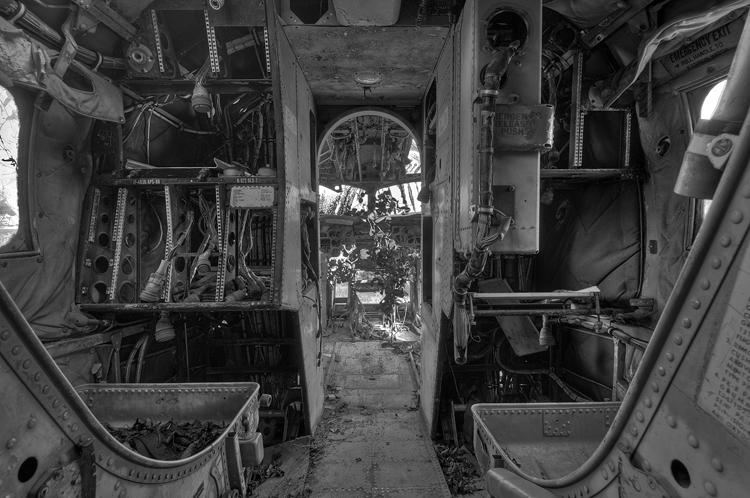 My mind raced with possibilities for the countless amazing shots inside these planes. This was my heaven, these are the photo ops that I live for! The beautiful contrast of industrial, man made decay juxtaposed against the slow progression of nature taking over again is a subject I love to explore.The plane looked stable enough, so I turned to Casey and Greg. “I’m going in! I just want you guys to know that if this plane collapses and I die, that I will have died happy!”I hoisted myself up into the fuselage of the plane through the hobbit door and crouched there a second, making sure everything was stable. Thankfully, it felt solid as a rock. From the low ceiling, to the wire bundles that hung like ropes, to the protruding rusted metal parts, everything screamed tetanus! Casey carefully passed my tripod mounted camera up through the hatchway to me. Hunkered over, I slowly made my way up to the cockpit. What I saw was sheer beauty. Over the years, vines had wound their way up through the windows and skeletal nose of the plane and draped the inside of the deteriorated cockpit. The seats had long ago been stripped of their padding and were now bare metal repositories for dead leaves and debris. 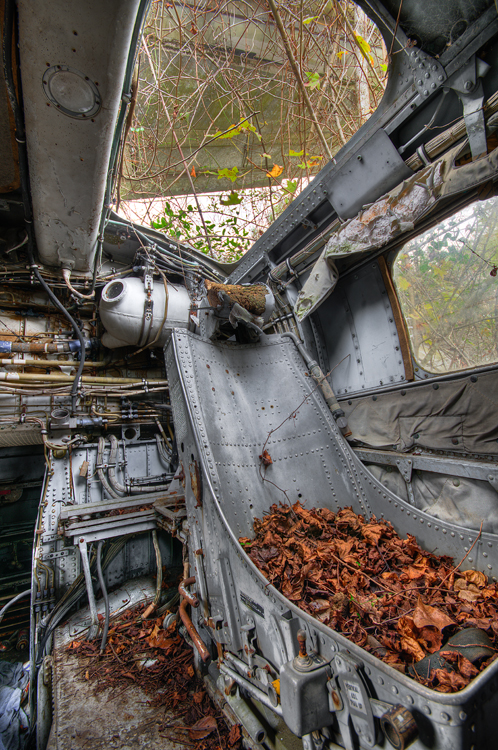 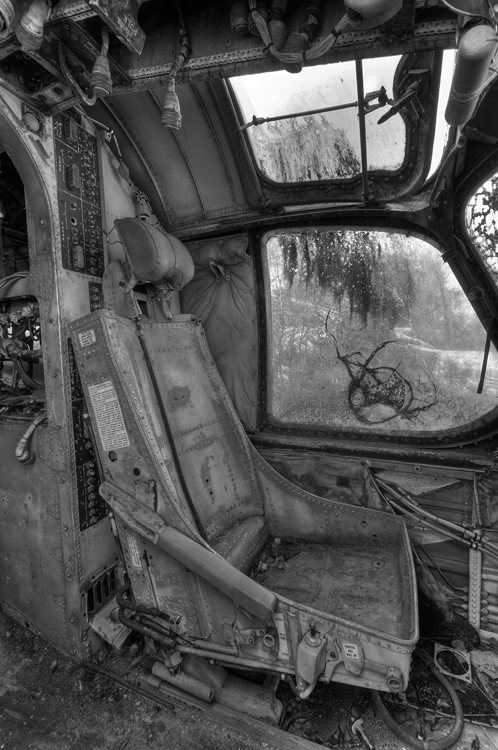 Half of the windows were still intact and hazed over by years of grime and fungus, and the other half were either gone completely or partially shattered, giving a broken jagged view of the other sleeping planes half hidden in the surrounding trees and undergrowth. The instrument panels were largely stripped of gauges and dials. Above me, levers, switches, wires, and buttons speckled the ceiling of the cockpit. With the nose of the plane removed you could see right through to the ground below. As I rattled off my first HDR inside the cockpit I thought to myself “Abandoned school buses, eat your hearts out!” 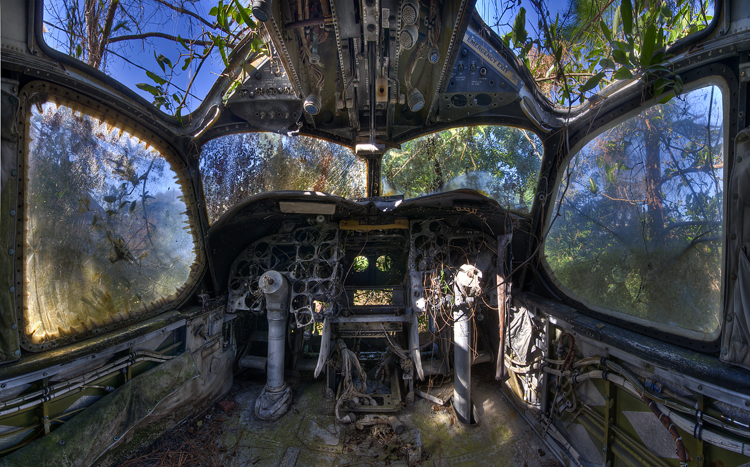 I proceeded through the airplane graveyard with Casey and Greg who helped point out interesting shots and helped me in and out of the planes as I explored each one, getting shots of every cockpit and interior. 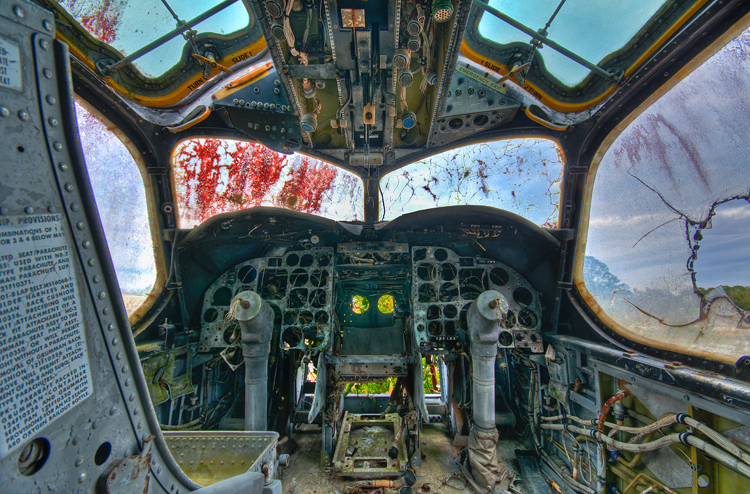 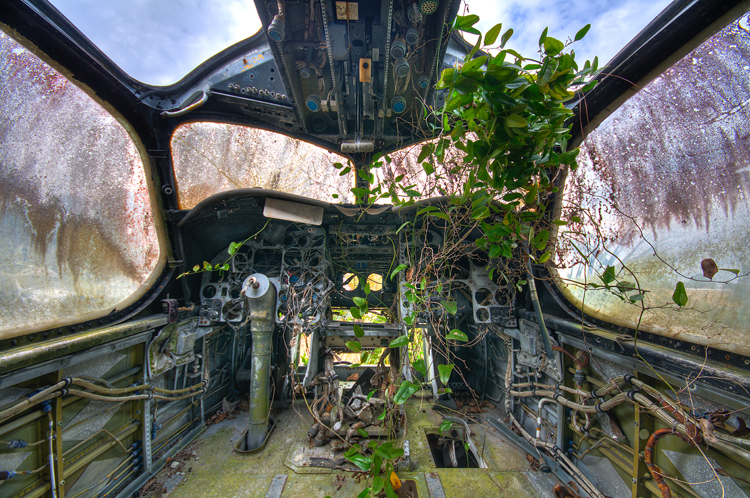 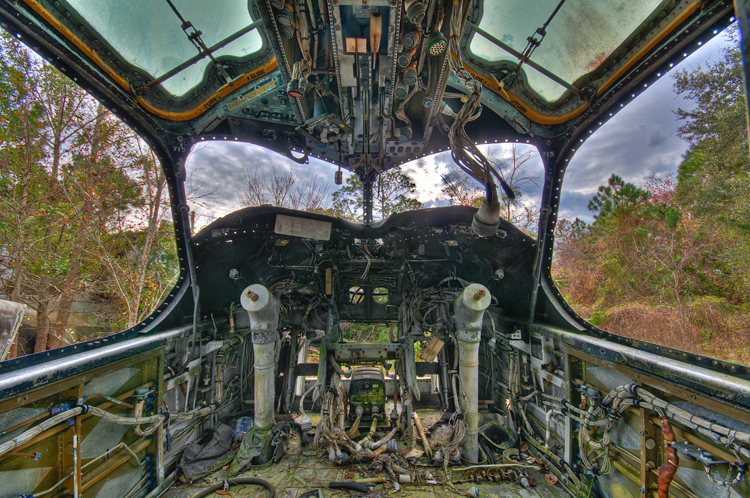 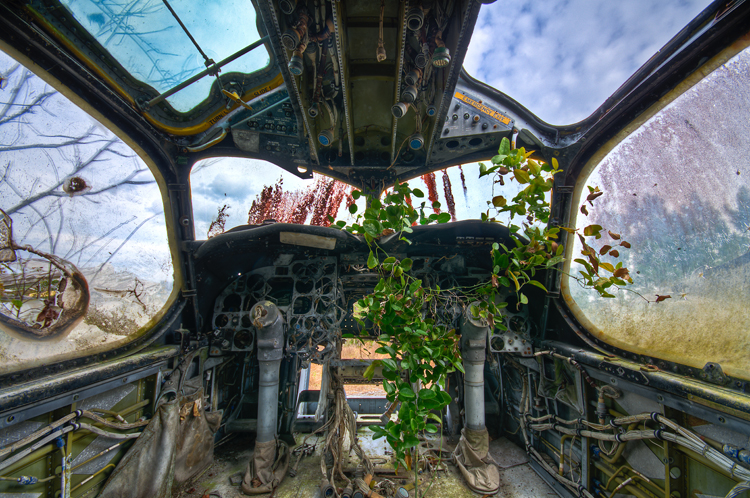 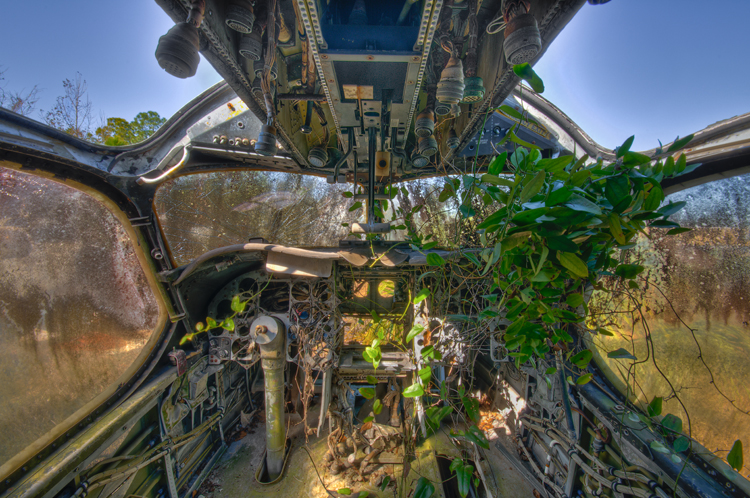 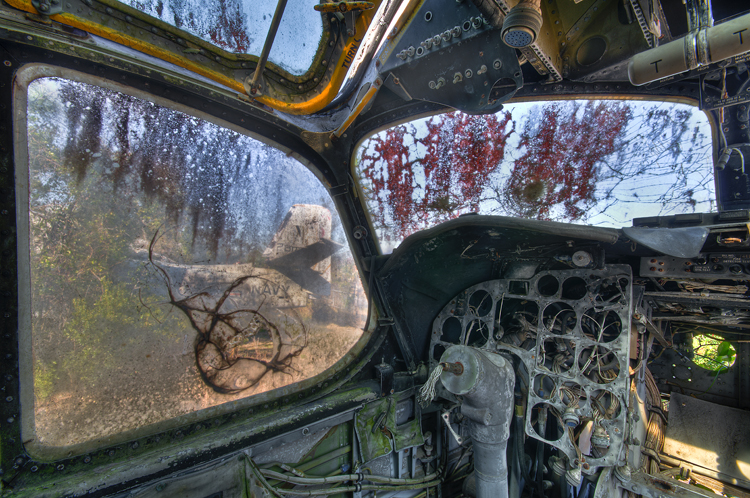 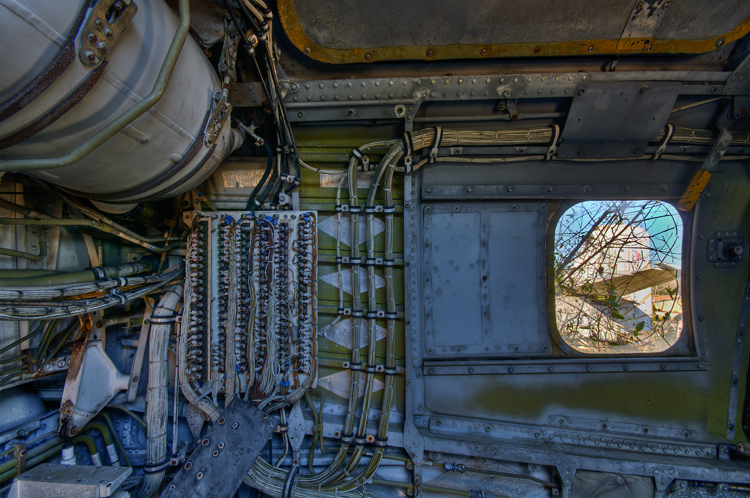 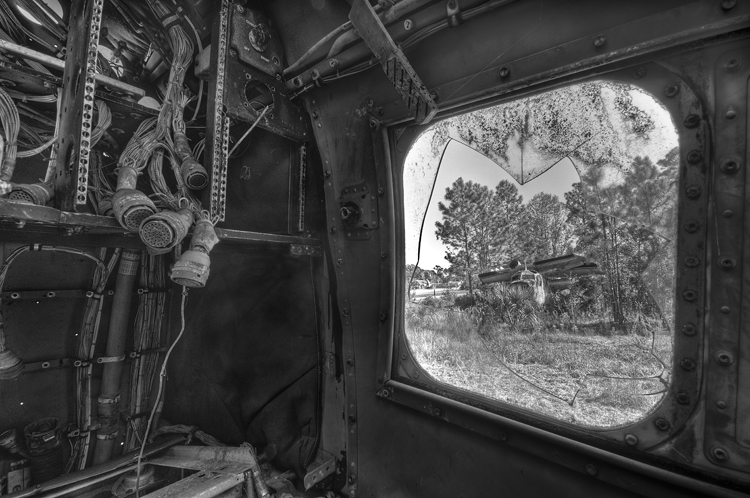 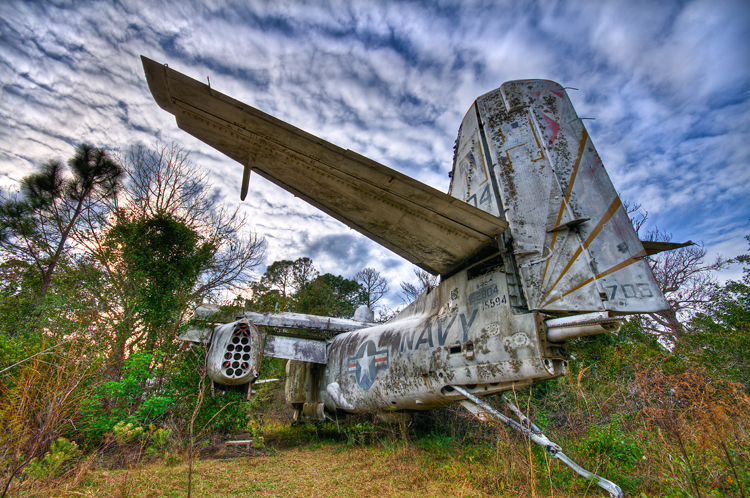 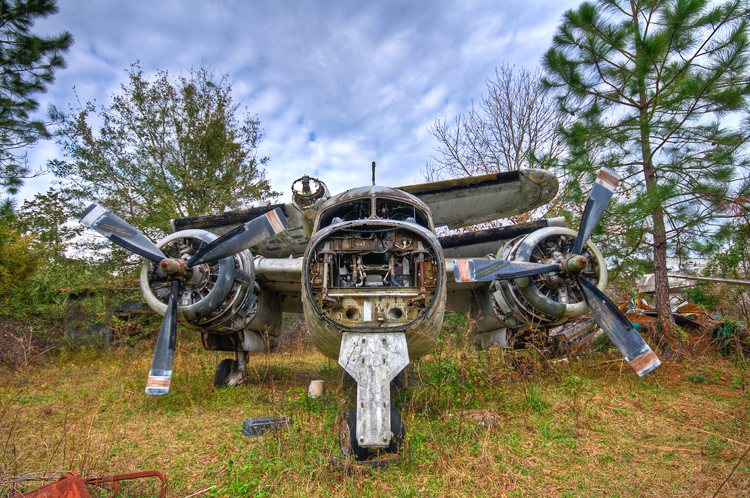 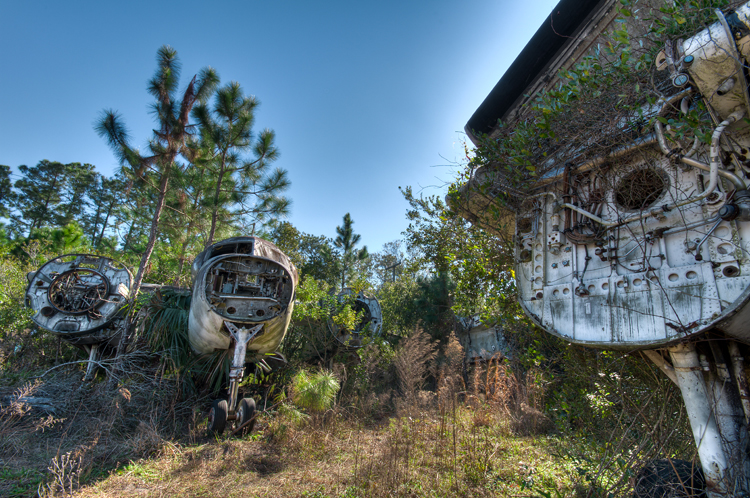 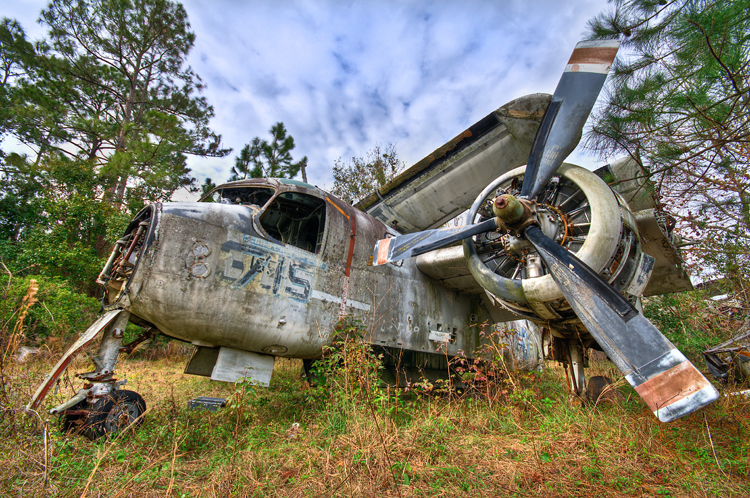 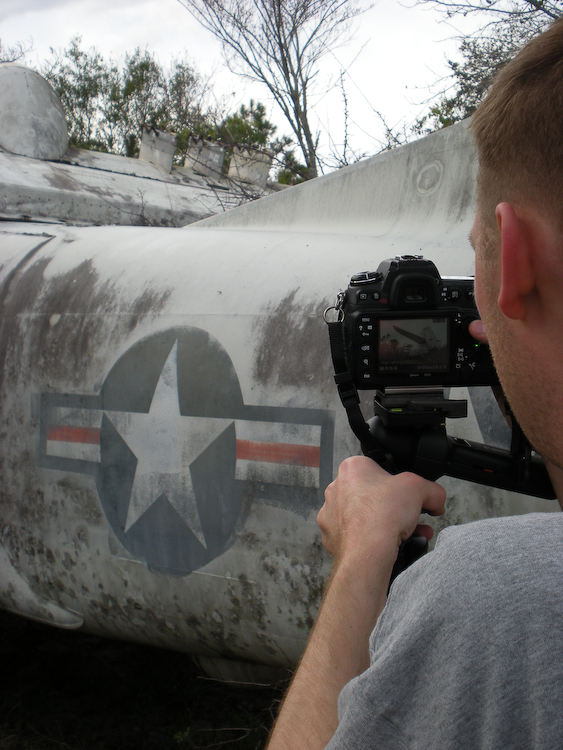 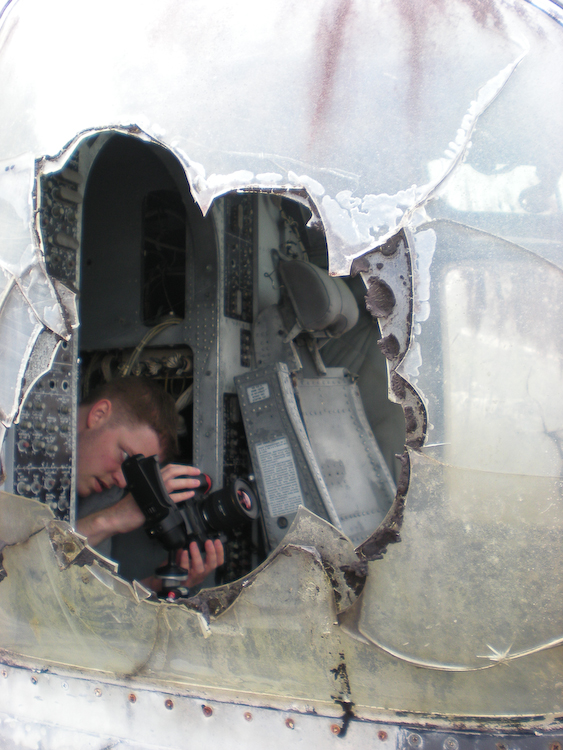 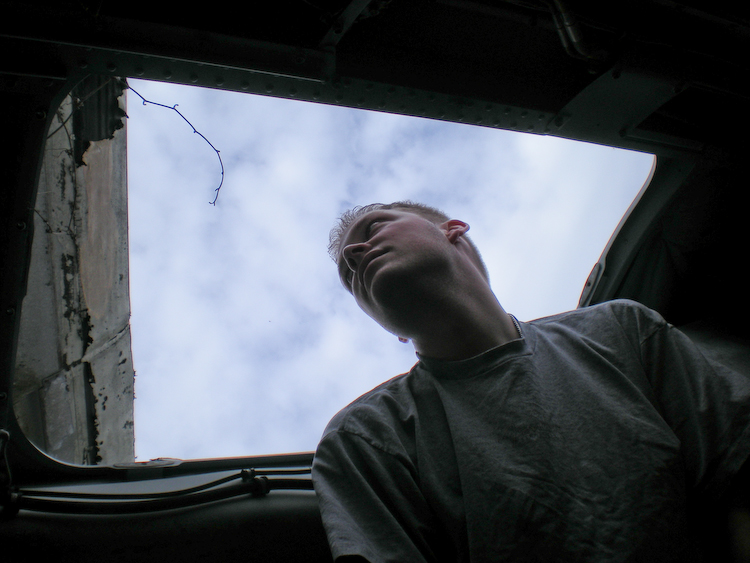 We occasionally heard voices from the nearby houses so we kept as quiet as possible. Greg had seen a cop car drive slowly by a few times but they never stopped. After I had my fill of HDR shots, Casey suggested that we do some shots of him inside a plane. The bombed out cockpit made an awesome backdrop for some unique portraits. 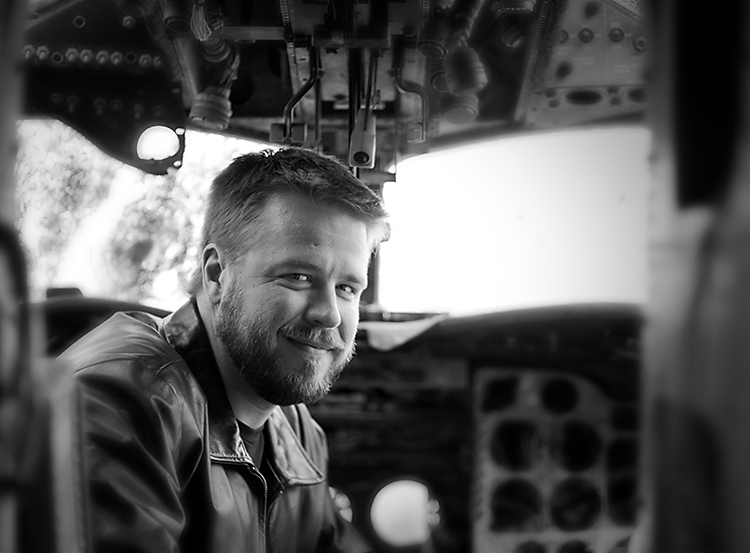 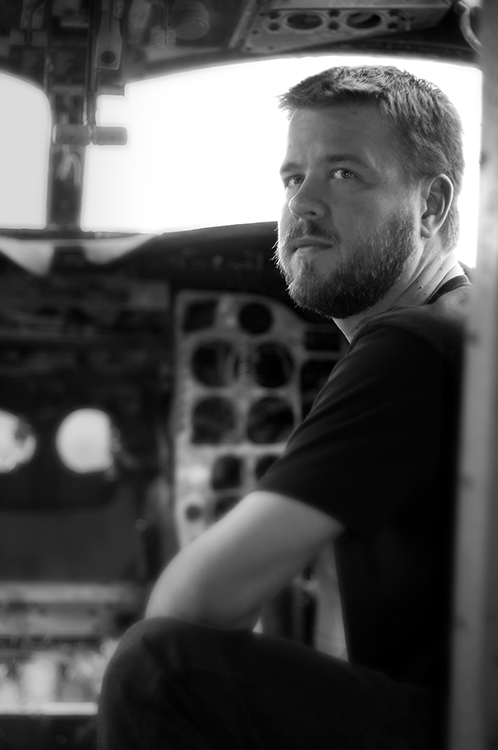 We even relaxed enough to have a little fun with some of the shots as well. 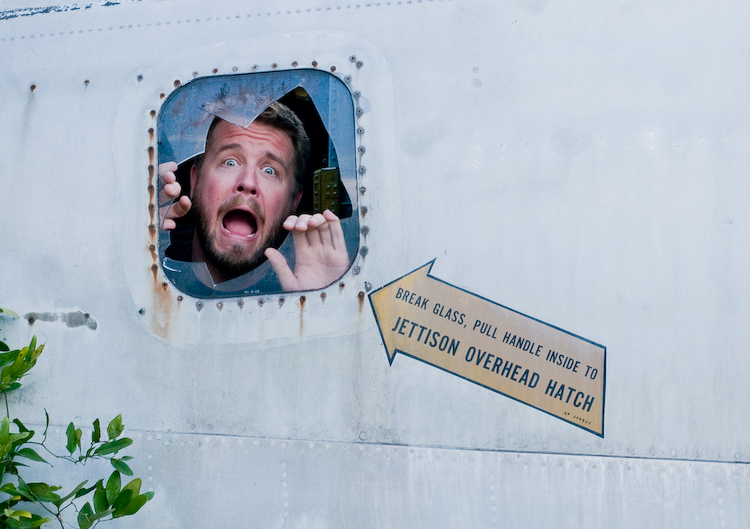 Before we headed out Greg assisted the brave and foolish Casey up onto the tail fin of one of the planes and we did a few shots up there as well. 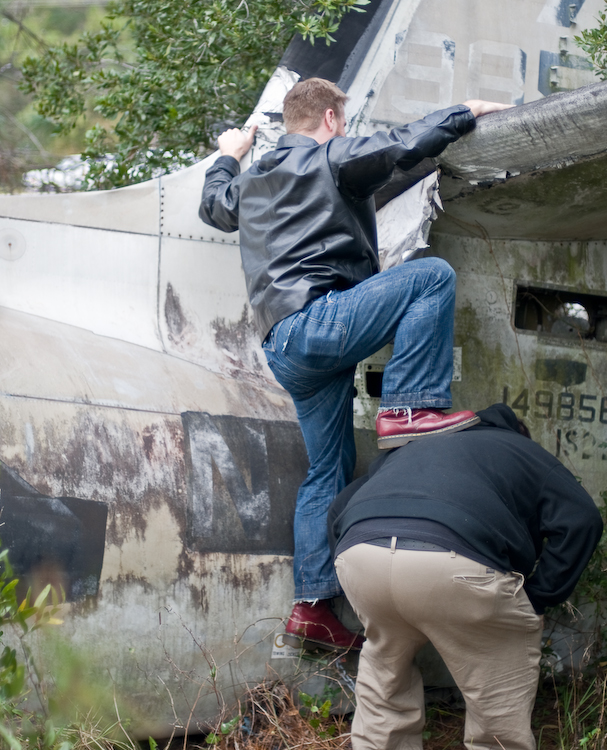 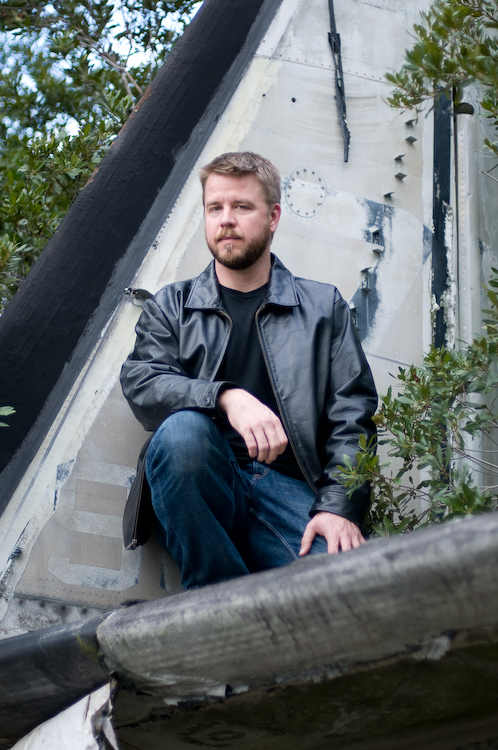 Back in the car, I was exhausted but still on a natural high from exploring the planes. I couldn’t stop talking about how amazing the experience was and I couldn’t wait to see my shots. For good measure my dad and I returned to the graveyard two days later, just to be sure I had thoroughly explored all the possibilities. All in all this ranks in my top five favorite photo shoots. The locals say the planes have been there for at least 15 years, so when I return they should still be there, resting with the other retirees under Florida’s tropical sun.