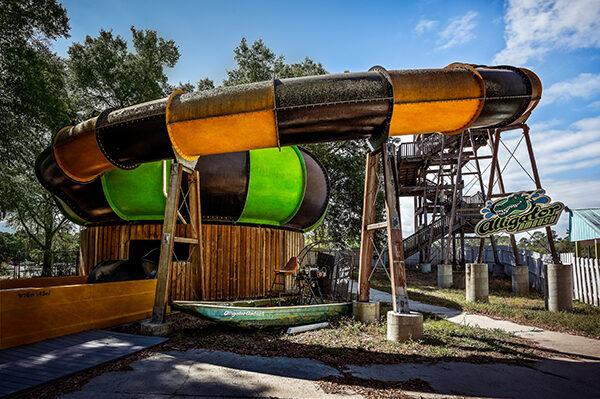 ***UPDATE as of December 2018, this location has been demolished***

***Please note, we had special permission from the State of Florida to shoot at Wild Waters. This location is private state property and is actively patrolled.***

The humidity felt thick–like slogging through a hot fog—as I walked alongside other tourists, under the “Florida’s Silver Springs” sign for the first time in 30 years. I was six the last time I visited the famed artesian springs, and quite frankly not much has changed since then. But then again that’s part of the appeal of visiting one of Florida’s oldest tourist attractions. People have been visiting the springs in Ocala, Florida since before the Civil War.

My reason for traveling here and enduring North Florida’s oppressive land-locked heat and humidity wasn’t purely for nostalgia’s sake though; I had my sights set on photographing Wild Waters, a recently closed and abandoned water park on the grounds of the now state-owned property.

Getting legal access to photograph abandoned and off-limits places can be a challenge. Throw in the fact that the State of Florida now owns Silver Springs park, and getting permission becomes even more difficult. Several days prior, I had met with one of the head park rangers about photographing the old Wild Waters portion of Silver Springs. After a bit of explaining why I wanted in and assuring them that it was NOT my intent to paint a negative or bleak picture of Silver Springs, I got the OK. I also got a stack of paperwork to sign, forms, releases, and requests for copies of my business’s insurance liability policy. We set a date for the shoot and arranged to pay for an off-duty ranger to accompany us into the water park (a condition that was non-negotiable due to the State’s liability concerns). But to tell the story of Wild Waters, I needed to tell the story of Silver Springs as a whole. 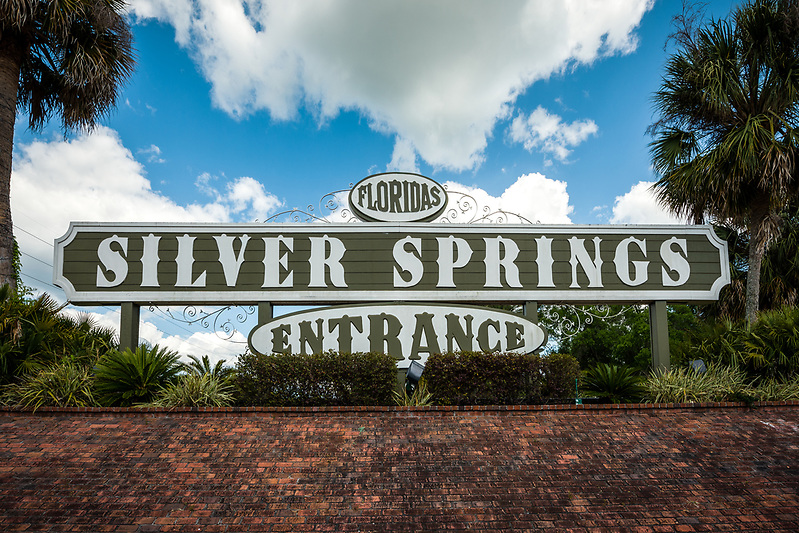 That brings us back to me standing in line at the ticket booth, sweat drenched with all my camera gear on my back, buying tickets for myself and my best friend Casey to photograph the NON-abandoned Silver Springs State Park. Like mom always said; “You have to eat your vegetables before you can have your dessert.” 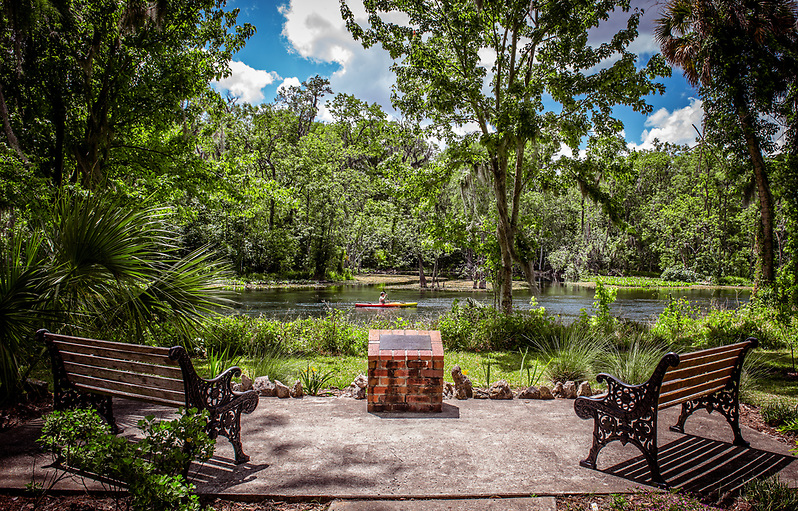 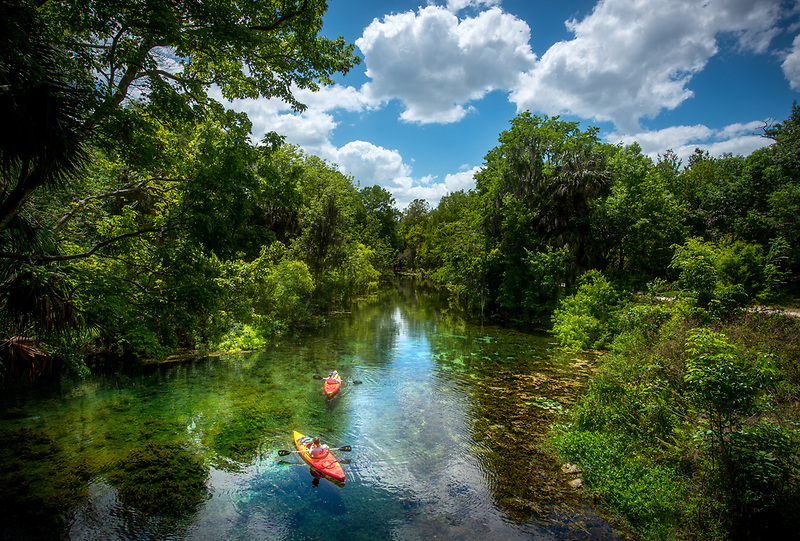 Silver Springs was founded in 1852 and its stunningly beautiful natural environment enticed visitors from all over the country. Over the years, numerous attractions, exhibits, rides, and family activities have come and gone, but the mainstay has been the world-famous glass bottom boats. The glass bottom boat tours allow visitors a unique way to experience the springs, and view all manner of wildlife, both on and in the springs. The boat tours began running in the 1870s, and still run today. Some of the current glass bottom boat captains have been guiding tourists across the crystal-clear waters for over 30 years.

The springs are some of Florida’s largest, and are home to myriad creatures including alligators, great blue herons, egrets, turtles, and even monkeys! Rhesus monkeys were introduced on a small island in the park in the 1930s to enhance the “Jungle Cruise” boat ride.  However, their excellent swimming ability was not taken into account, and they quickly escaped their confines, forming feral troops and establishing their population along the river banks. The monkeys can still be seen there today (though we did not catch any glimpses of them while we were there). 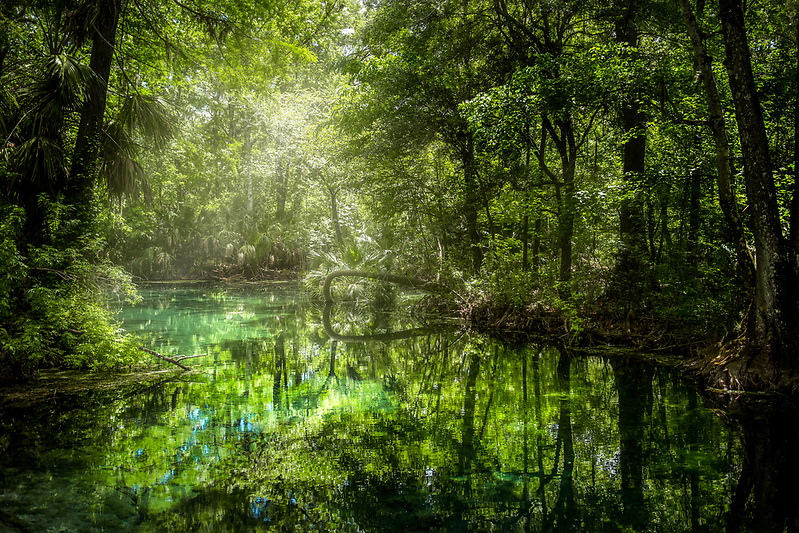 Silver Springs has also been the site of many Hollywood films, including Tarzan, The Creature from the Black Lagoon, and the TV Series Sea Hunt. Scenes from Legend and James Bond were also filmed on site.

In 1971 Silver Springs was declared a National Natural Landmark. But it wasn’t until 1993, when some of the first scientific studies were performed, that a concerted effort to preserve and maintain the natural habitat were implemented. Even so, Silver Springs has faced serious difficulties in the past, with increased pollution and nearby modern development harming the river habitat, decreasing the fish population, and dramatically decreasing the waterflow from the aquifer as the demand from surrounding populations has increased. As of recent though, these problems have been subsiding. In 2013 the location became known as Silver Springs State Park when the State of Florida took over operations. 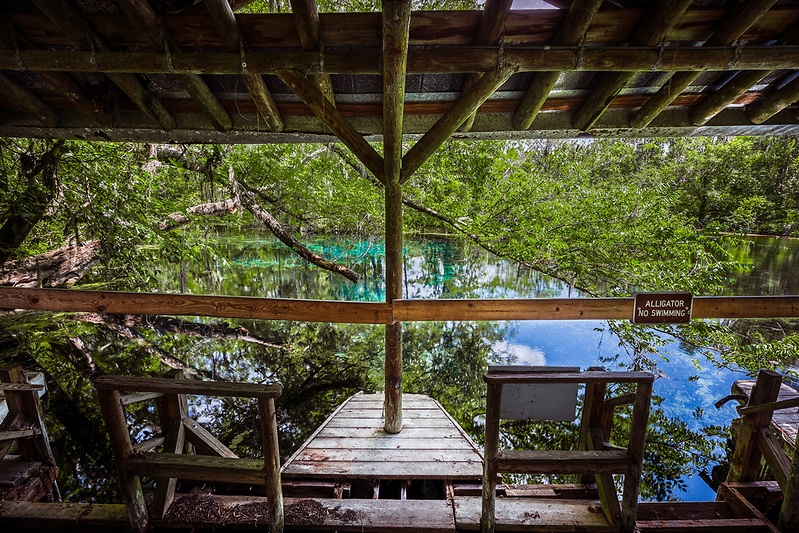 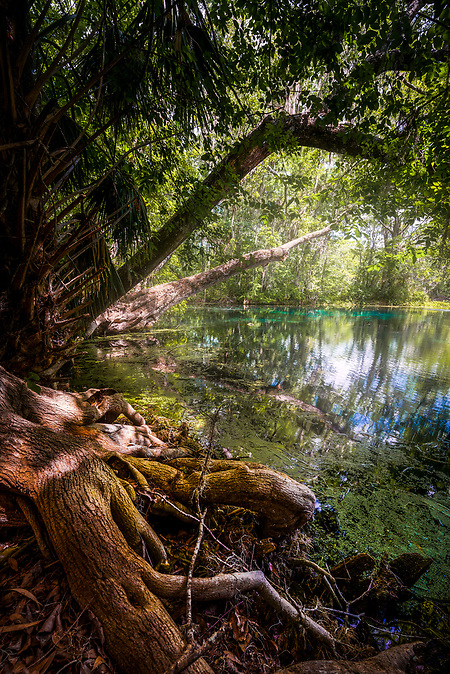 This brings us full circle, and once again finds Casey and me, in the thick of Florida’s heat and humidity, waiting on a park ranger to meet us and unlock a gate that will lead us into the now abandoned Wild Waters water park. About 100 yards from the entrance to Silver Springs State Park, the once popular summertime attraction now sits overgrown and neglected, just the way I like it! 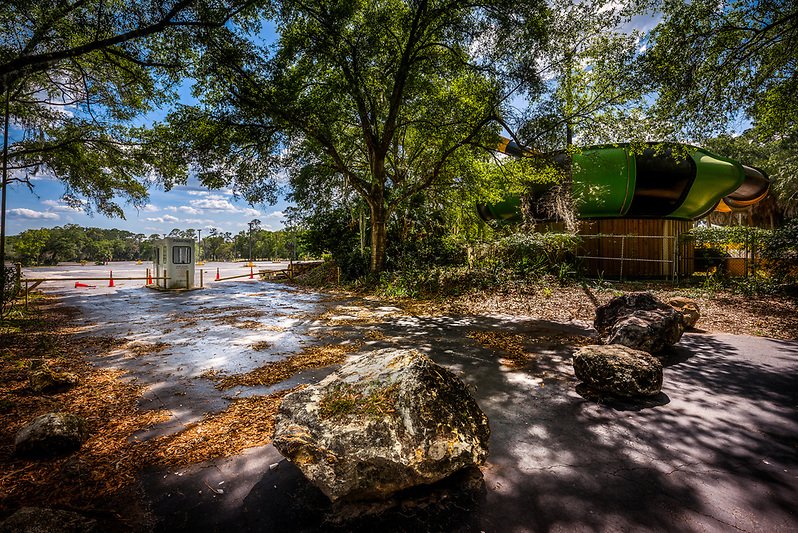 Wild Waters was built in 1978, and it was one of the very first water parks in the south.  Wild Waters helped boost the popularity of Ocala’s Silver Springs during a time when Orlando’s Disney was quickly becoming the state’s main tourist attraction.

Wild Waters was a one-stop-shop for family fun in the summer. With a wave pool, water slides a-plenty, wading pool for the kiddies, the “Cool Kid Zone” for grade schoolers, and concession stands keeping the fries and burgers coming all day long. Sprinkled throughout the park were plenty of trees for shade, picnic areas, snack bars, a sand volleyball court, and the obligatory gift shop.

Once the park ranger arrived, we entered the grounds and took in our surroundings, our feet crunching on a carpet of dried leaves. It had only been a few years since the park closed, but in Florida nature doesn’t waste time taking over an untended property. We entered the central part of the park and took in the 360-degree view of the water slides, the wave pool, and boarded up concession buildings. 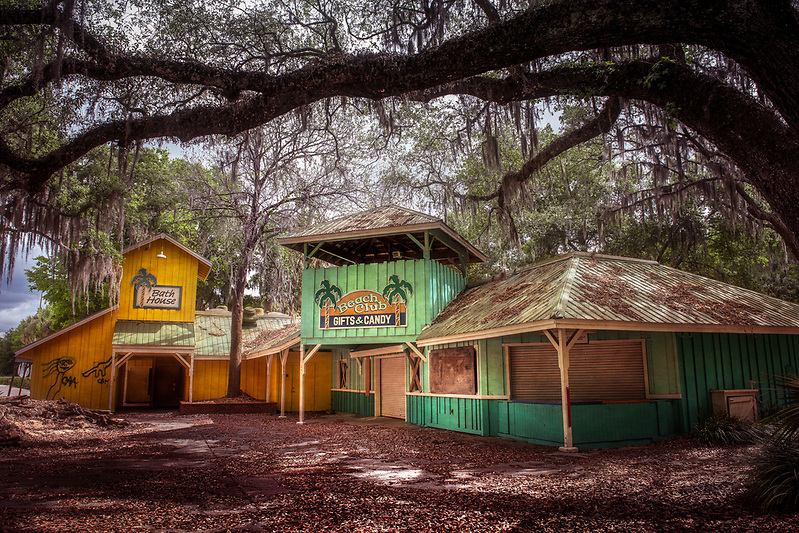 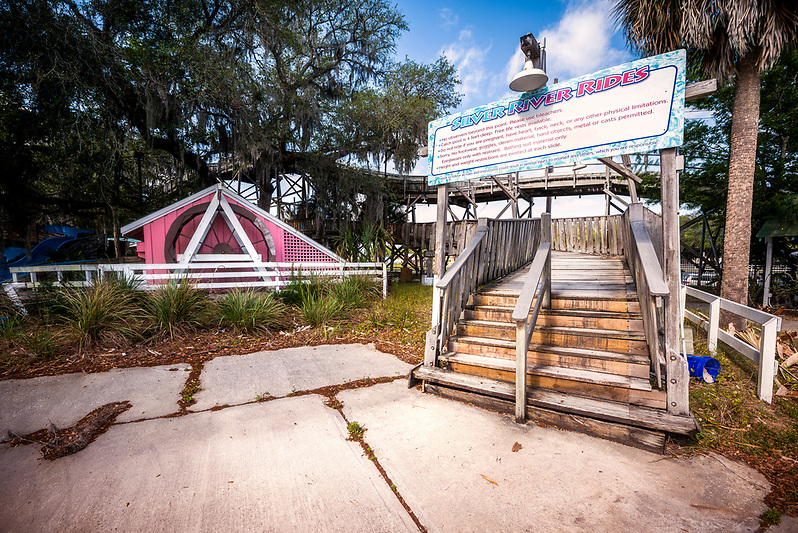 I set up a couple cameras to take time lapses, then grabbed my Nikon D800 and got to work. 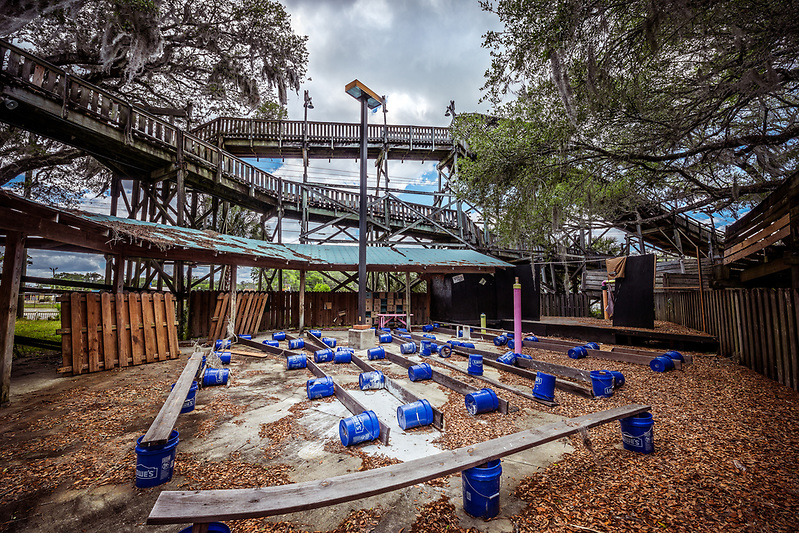 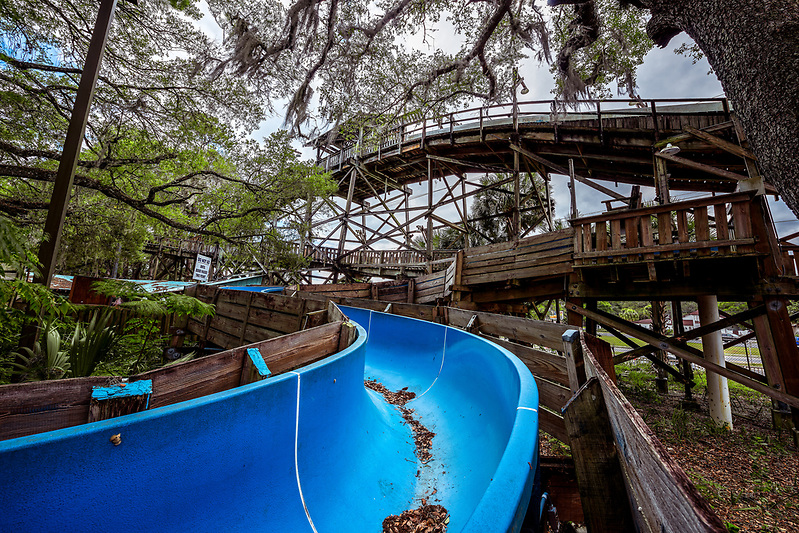 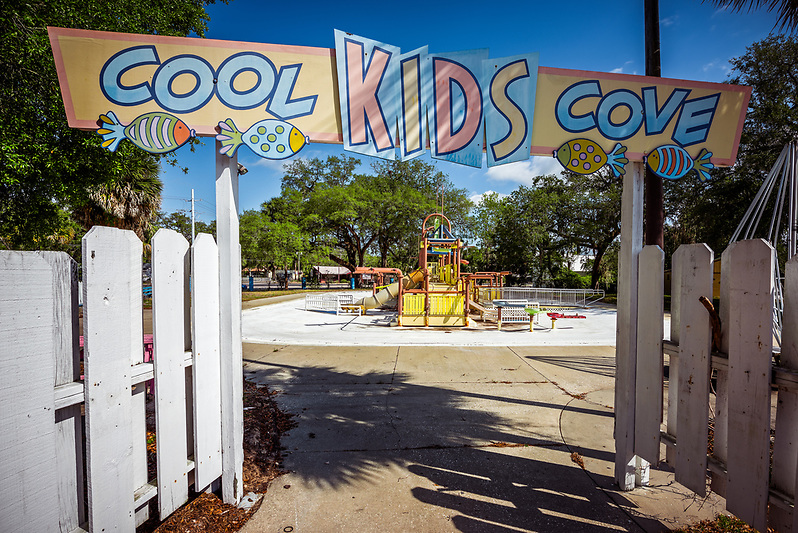 We broke for lunch at a nearby Sonny’s BBQ, pulled several ticks off of ourselves and got right back to the park. I spent most of my time shooting still photography, but I did dedicate some time to do some video work as well. Even though video is not what I am known for, I still enjoy making short vignettes of some of the places I shoot. Nothing extravagant, but enough for you to get the feel of a location in video form. You can check out my YouTube channel and the videos I create HERE.

Since most of the elevated structures had not been maintained in several years, we were under very strict orders (and supervision) not to ascend any elevated places or climb up on any of the rides/wooden platforms. I was disappointed that the restriction was enforced (I added the State to my business liability insurance after all!) but I understood the State’s concerns.  Luckily, the ranger that was with us was very cool and understanding, and there was one structure that was made up of a cement foundation that she allowed us to climb up to the top—The Hurricane. This was a large figure eight double flume that riders would have used tubes to go down. The ride whipped you around curves before taking you into a long dark tunnel, and then flinging you out into a splash pool at the bottom. 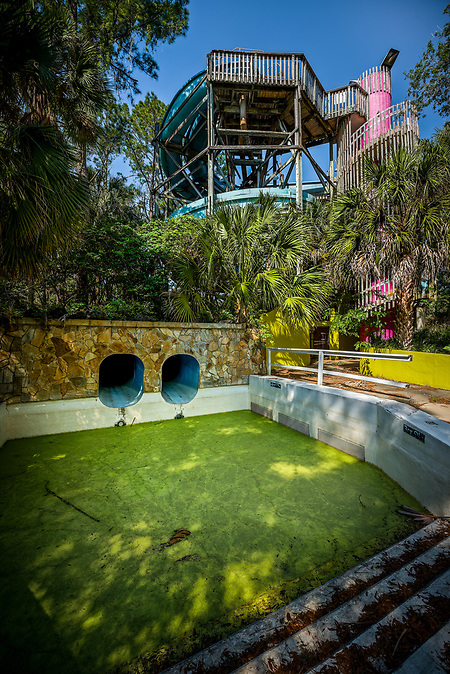 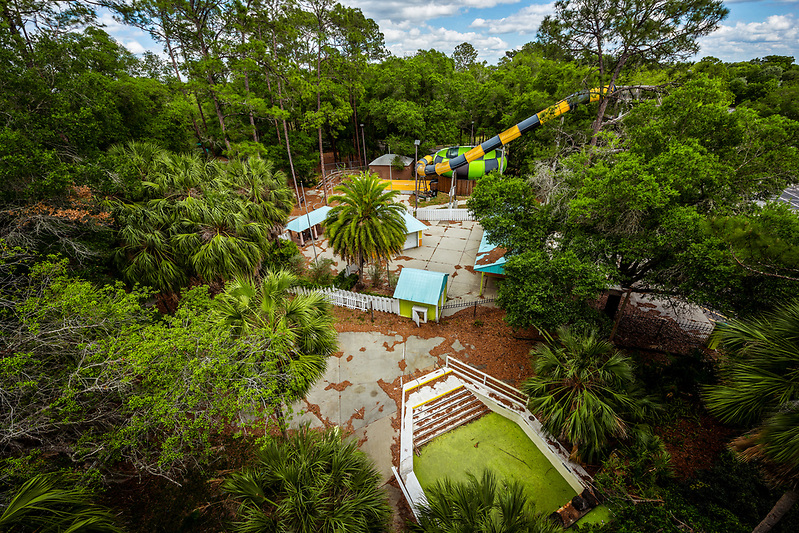 In the center of the park were a series of three converging water slides, known as the Silver River Rides. This unfortunately was one of the large wooden structures that we were prohibited from climbing up, but I was able to get a great shot of the three slides entering the splash pool at the bottom. This scene shows the essence of the park, with the large trees and Spanish moss hanging down. Truly a beautiful place to spend a hot summer afternoon. 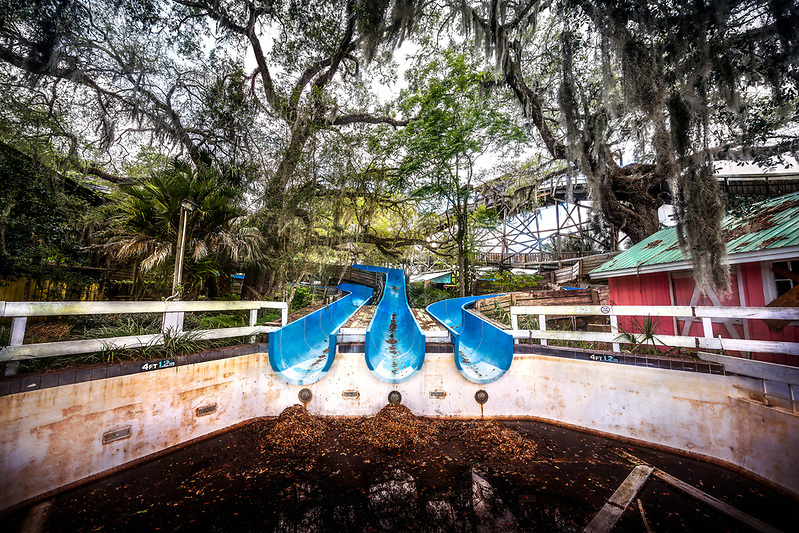 Alligator Ambush was a newer ride built in 2008, and consisted of a long enclosed drop into a circular “toilet bowl” structure that would spin you around and spill you out the bottom. 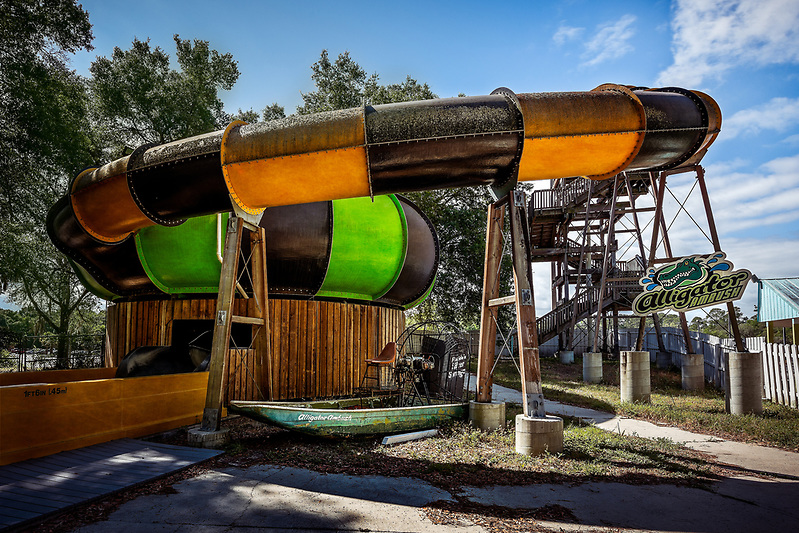 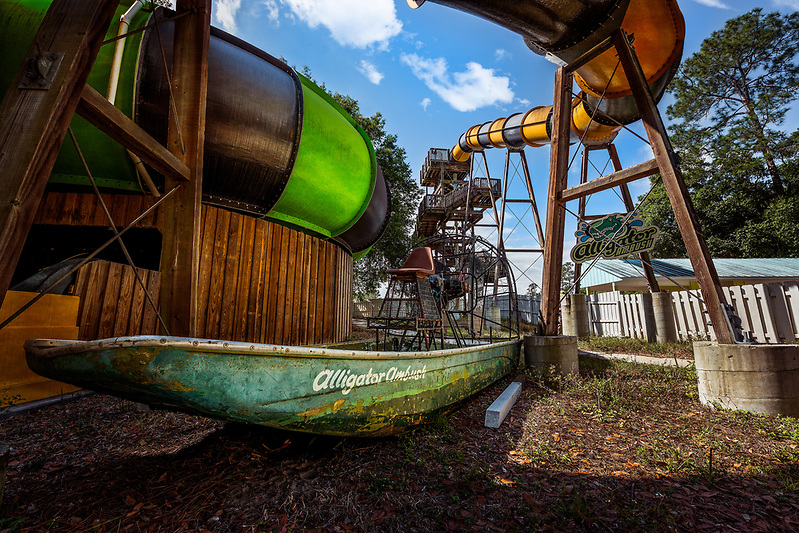 There was a surprise waiting inside the bowl–a giant (fake) alligator that spit water at you as you spun circles around it. When we heard about this feature from the ranger we HAD to get a closer look inside the bowl. Since the restrictions were that we were not allowed to climb up any of the rides, I had to wait until the ranger was on a very short bathroom break, and scrambled up the lower slide into the bowl to snag some quick handheld shots of the gator! If you are from the State of Florida and are reading this; my apologies for the very mild act of disobedience! It simply could not be avoided in this case 😉 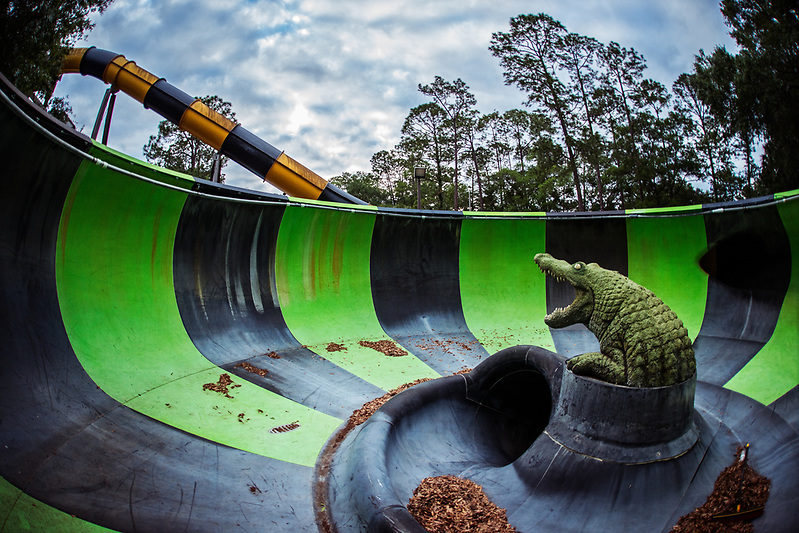 The Silver Bullet Flumes were on the far edge of the park and were the only speed flumes at the location. The flumes had two dips on their way down and were not simply a straight drop. The discarded pool noodles laying around added some nice splashes of color to the scene. 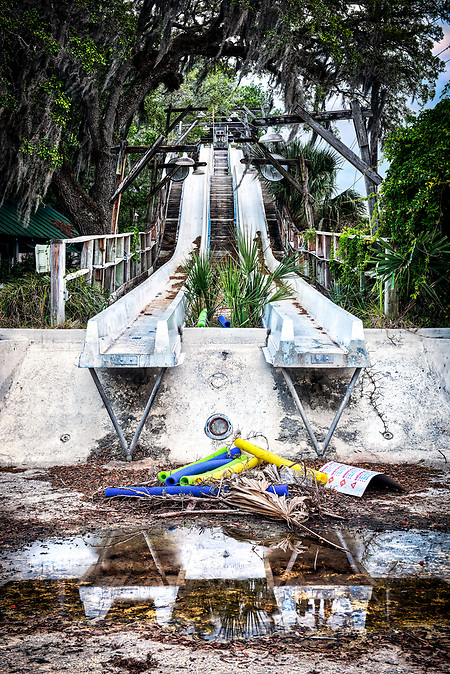 The centerpiece of Wild Waters was the 450,000-gallon wave pool. The pool would alternate between calm splashes of tiny waves and up to four-foot-tall waves. Lounge chairs would have once surrounded the pool, a few cracked and broken ones still littered the outskirts. 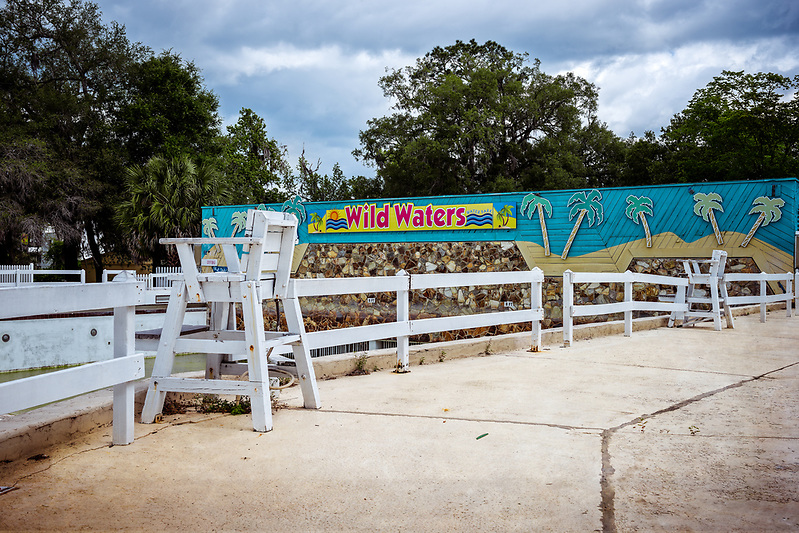 After nearly eight hours of exploring and photographing we decided to call it a day, and wrap up the shoot.

Wild Waters closed permanently in 2016. The State cited many financial reasons for it’s closure, but the main reason was that they wanted to bring a more natural aspect to the park as a whole, putting less of the focus on man-made attractions, and more attention on the natural beauty within the park. This closure has caused many locals to voice their dissent, as Wild Waters was a mainstay for both the community and tourists for decades.  However, with Wild Waters under the control of the state’s Department of Environmental protection, there is a conflict of interest because the objectives and mission of the Department is at odds with the operation of a water park.

It’s difficult to let go of a place that holds so many childhood memories. Generations of families have visited Wild Waters over the decades, and it’s very emotional to see a cherished summer getaway closed down and eventually taken away. Hopefully seeing some of these images will bring back memories for those that once frequented the long running Wild Waters. Please feel free to share your memories and experiences in the comments section below!

To view or purchase any of the images taken at this location, please CLICK HERE to visit my website. 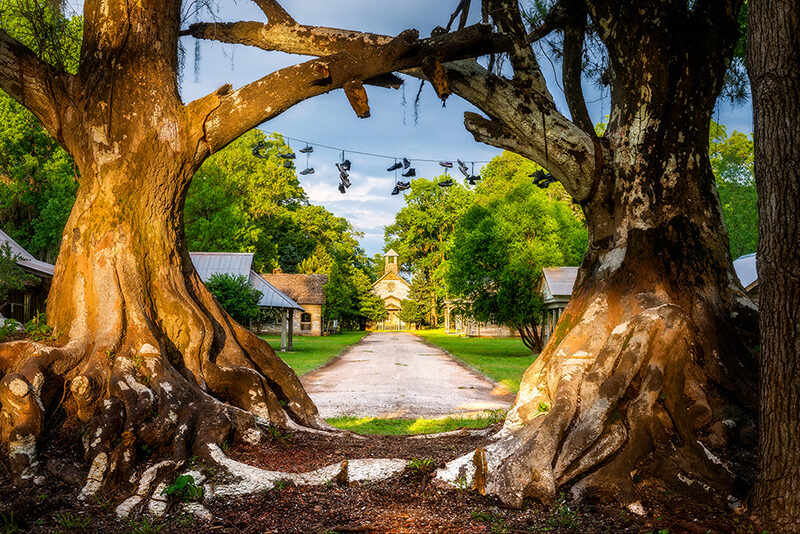