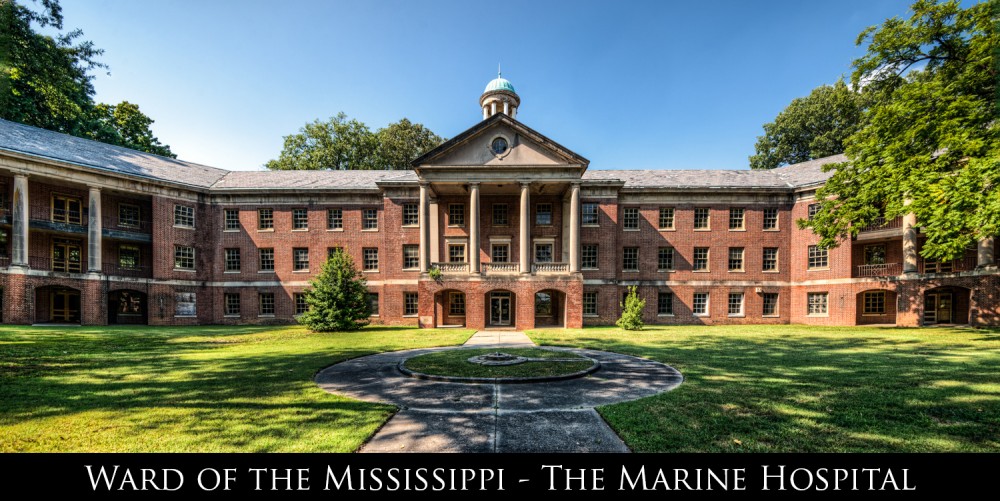 Ward of the Mississippi – The Marine Hospital

NOTICE: The Marine Hospital is ACTIVELY OWNED, patrolled, and monitored. This location while in state of disrepair, is slated for renovation and development. It is private property and special consideration was granted for us to access it. Do NOT attempt to go here without direct permission from the owners. I cannot and will not provide any information regarding access to the complex.

Marine Hospital Video from Walter Arnold on Vimeo.
I recently quit my day job as a banker and made the leap into freelance photography. To christen the major life change, I set out on a two week road trip with my best friend Casey Stern. Casey was also with me when we discovered the Airplane Graveyard in St. Augustine FL (now demolished)  where I was lucky enough to create some award winning imagery including an image of an airplane cockpit which was a winner in Canon’s Project Imagin8ion.  Our plan: to drive two and a half weeks from Asheville, NC to Nashville, TN, Memphis, TN, Hot Springs, AR, Kilgore, TX, Baton Rouge, LA, New Orleans, LA, Atlanta, GA, and then to our respective hometowns (NC and FL).

Fast forward to our first major stop: Memphis, TN. I had spent the month’s leading up to the trip researching abandoned, historic, and vintage locations. I made a connection with the owner of an old Marine Hospital in the French Fort district of Memphis who agreed to allows us legal access to the property which was locked up tight from the outside. 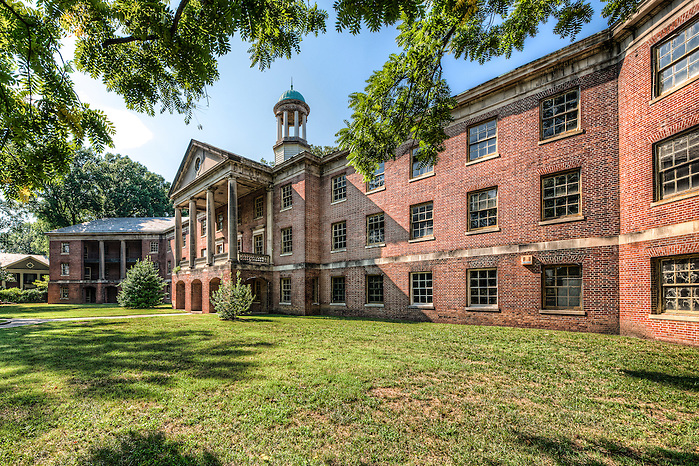 We met the owner at 11am, provided signed liability release forms, and he let us inside and told us a brief history about the location:
“The history of the hospital dates back to July 16, 1798, when President John Adams established the Marine Hospital Service.  Designed to care for sick and disabled seaman (working on the Mississippi River), it was the precursor to the U.S. Public Health Service… The hospital opened in 1884 and consisted of six buildings – the surgeon’s house, a stable, the executive building, two wards and the nurses’ building. The facility was originally used to treat Civil War soldiers and to conduct scientific research in hopes of finding a cure for yellow fever. Only two of the original buildings survive today, the nurses’ building (located on the east side of the 1930s hospital building) and the executive building (the white building that houses the Museum’s library and permanent collection). Both are listed on the National Register of Historic Places. During the 1930s, several new Works Progress Administration buildings were added to the site. To make room for the new buildings, the wards and stables were demolished and the executive and the nurses’ buildings, both of which faced the street, were moved three hundred feet to their current locations on wagons pulled by mules. “

“The largest of the buildings is the three-story, neo-classical brick hospital building that dominates the site. The Georgian-style building has slate roofing, a copper cupola on pedestals, and large limestone columns, capitals, and gutters. It cost $1 million. Although built to serve the needs of ailing seamen, the building has been used by the Coast Guard, cadets of the state maritime academies, members of the Coast and Geodetic Survey, Public Health fieldmen, the Army Corps of Engineers and employees and federal workers injured on duty… “ Source: Metal Museum

After unlocking two padlocked gates, and entryway doors, we parted ways with the owner as he allowed us full access to explore the massive complex as we wished. The three story building was a kind of “Y” shape so exploring each floor involved us walking up the center staircase and heading out in all three directions and back to the center each time.  Peeling lead paint, dust, dirt, decayed drop ceiling tiles, and more than likely asbestos particles wafted through the air as we walked around, our footsteps softly stirring up the debris. 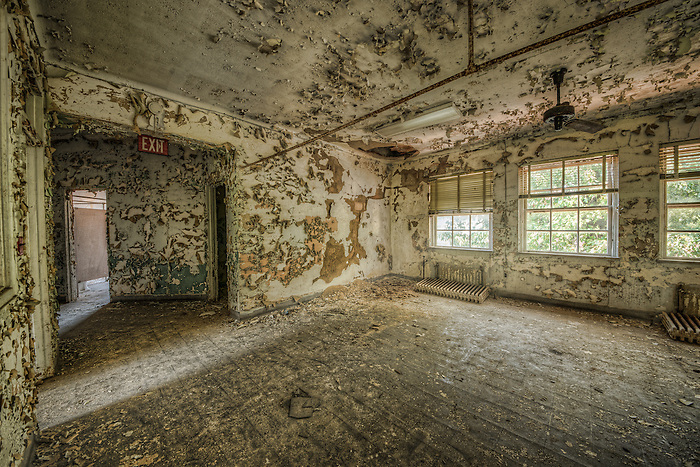 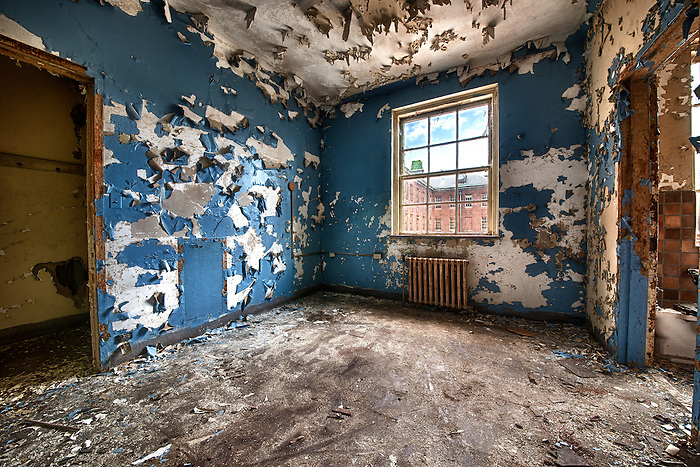 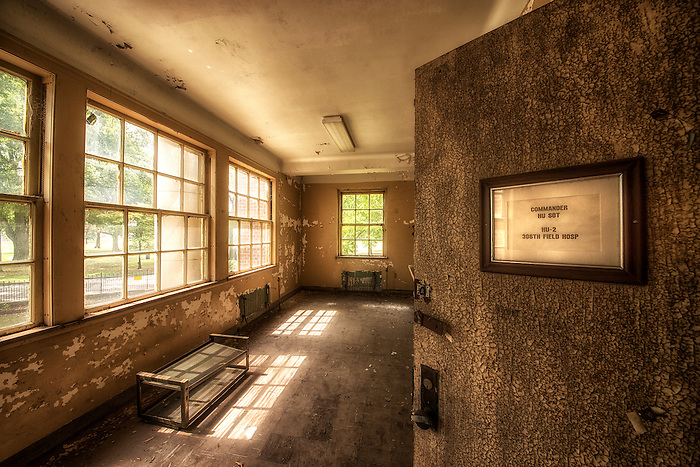 So many of these old locations are like walking back in time and the Marine Hospital was no exception. Hallway doors had identifying markers on then denoting commanders quarters, supply rooms, and plenty of medical areas, like the operating wing, dental wing,  X-Ray room, etc. 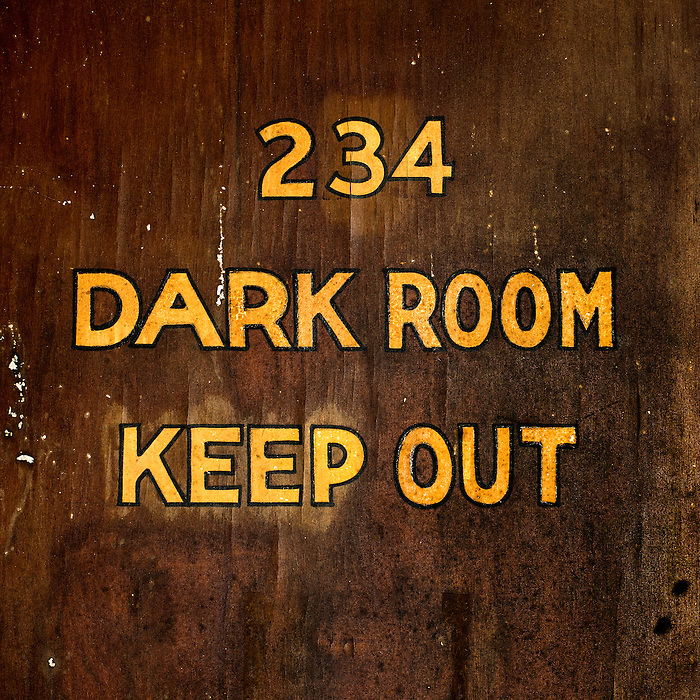 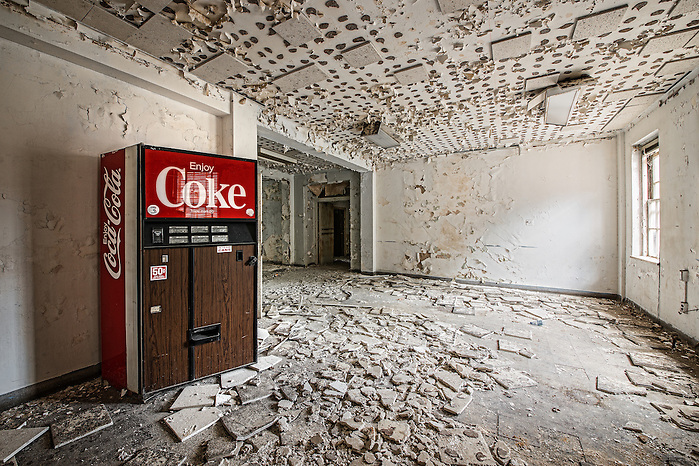 Most rooms were empty, some had connecting hallways with shared bathrooms between them. We poked out heads in each one though hoping to find some vestiges of the former occupants. Suddenly Casey called out to me, excitedly informing me of his discovery!  I walked down the hallway as he ushered me into a room that was obviously the dentistry section of the hospital.

The old vintage equipment still bolted to the floor were covered in layers of dust and dirt. One of the units, which looked like a wash basin with  articulating arms to hold dental tools stood near a window… it’s arms outstretched like an abandoned  “Star Wars” server droid who would bring around drinks and food at a bar on Tatooine!  I never was much of a fan of going to the dentist (only looking forward to the occasional chance to space out to some music on my iPhone while sucking down some nitrous oxide..) but  hanging out here with the old vintage equipment in the swirling dust and decay made me appreciate the high tech comforts (and clean surfaces) that my current dental provider treats me to! Nonetheless I totally geeked out over the outdated abandoned equipment and cursed the person who removed the old dental chair that must have been there at one point! 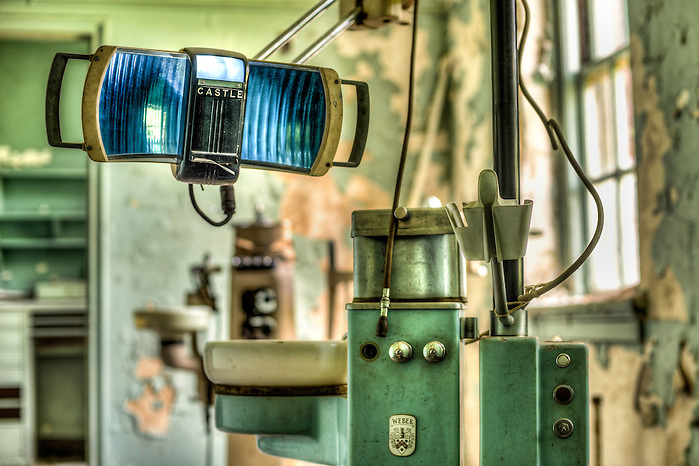 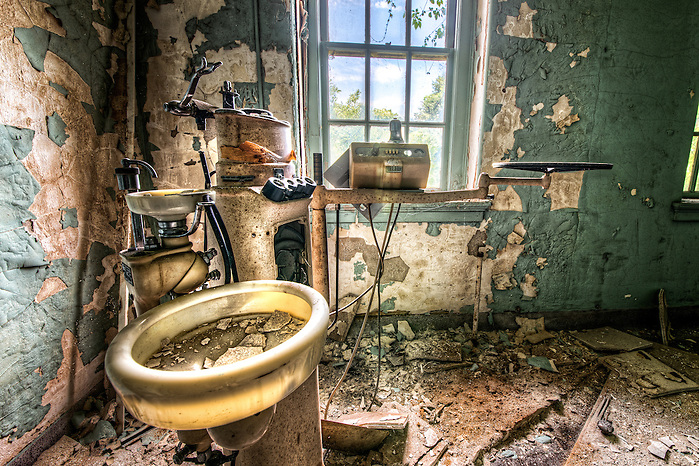 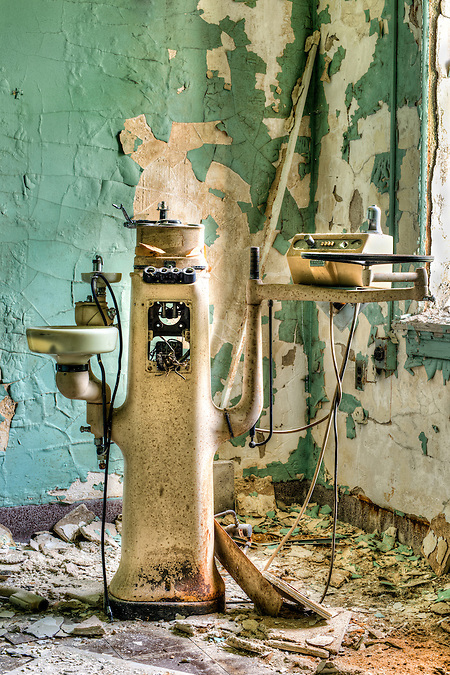 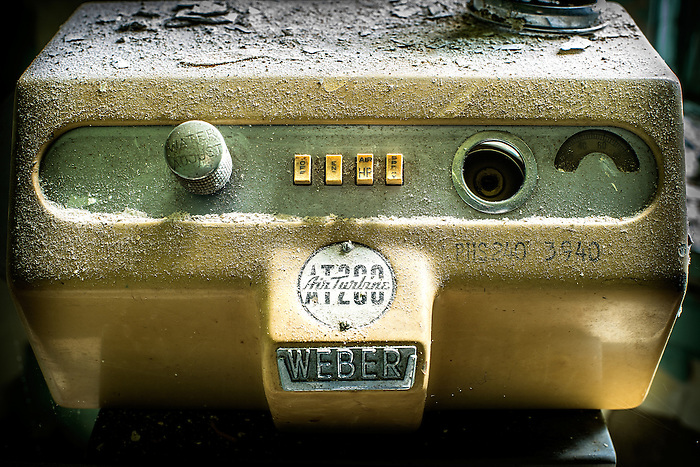 Just down the hall from the dentistry rooms was the old operating wing where medical tests, operations and exams would have occurred. I got a few cool shots of an old surgical light and some lab testing equipment but you can see some more of the wing on our “Photo Adventure Road Trip Video Blog” if you like (the video blog is also embedded at the bottom of the blog)! 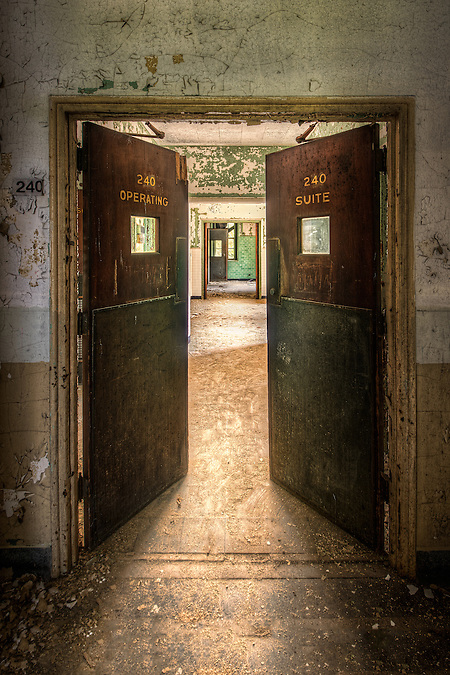 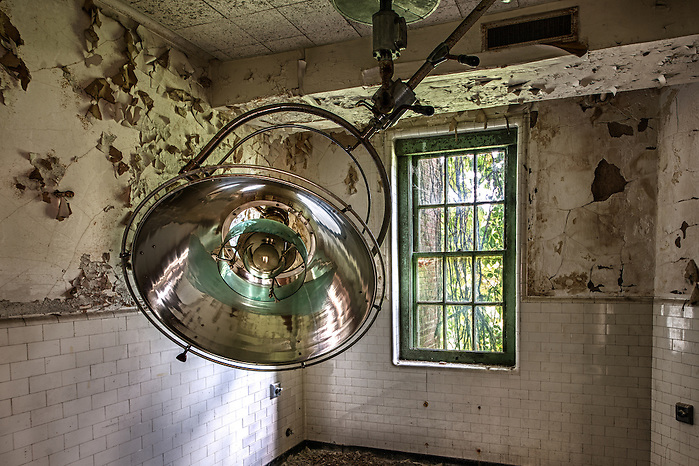 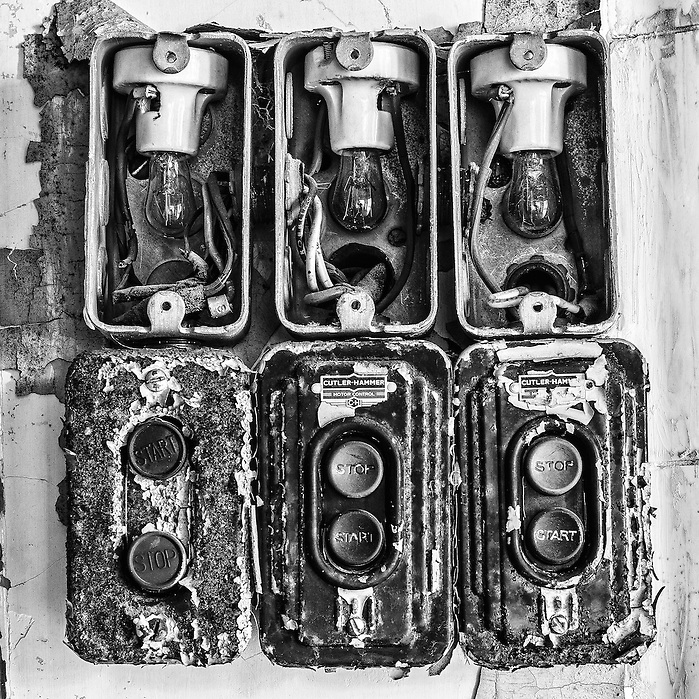 After breaking for an extravagant lunch comprised of peanut butter and jelly sandwiches and luke warm water we snapped a few images of ourselves in an old rocking chair and delved back into the massive complex.

We headed up to the third floor and then the roof to check out the view.

Last on the list (for good reason) was the basement… And the morgue. Of course it was completely pitch black, dank, dark, dreary, and just a little bit creepy if you stopped long enough to think about it… The morgue had an old embalming/examination slab, and an old florescent light fixture hung just above. In the corner of the room sat two slide-out containment units for the dead bodies to be stored.  After we got past the creepiness factor, we set up the camera and began to “light paint”.  Remember the was NO light down here, but we did have four led flashlights that we were able to play with and strategically place, aim, and “paint” with in the room. Most of the shots in here were 20 to 30 second exposures using the flashlights. 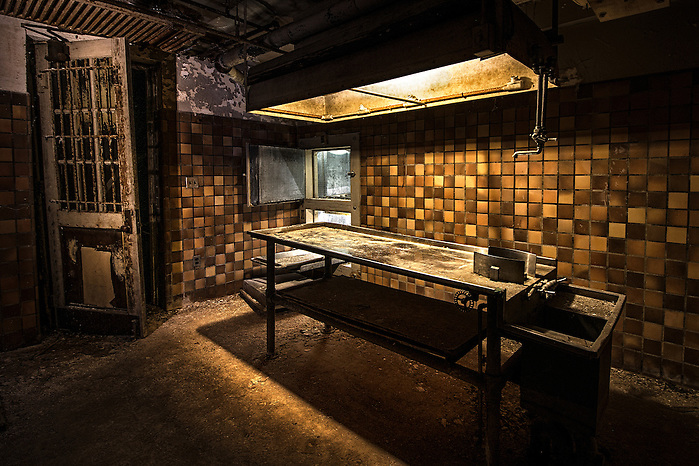 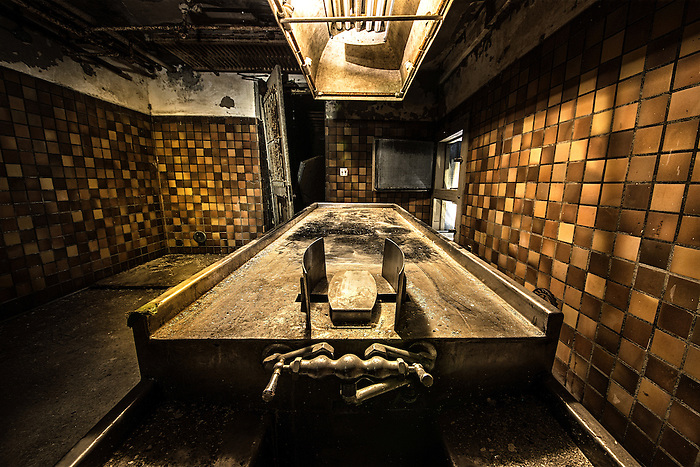 Of course we also had to get up on the embalming table!!

After shooting the morgue we explored the rest of the pitch black basement and headed back up for our gear.  At this point we had been exploring the location for just about six hours and were wiped out from heat, exhaustion, and  copious amounts of unidentified particulates we had breathed in while they floated around in the air. I used what energy I had left to drag my gear out to the front of the building and photograph a few outside shots of the magnificent campus.

Lastly here is our “video blog” from the Marine Hospital as produced from the road (so forgive the editing or lack thereof!)