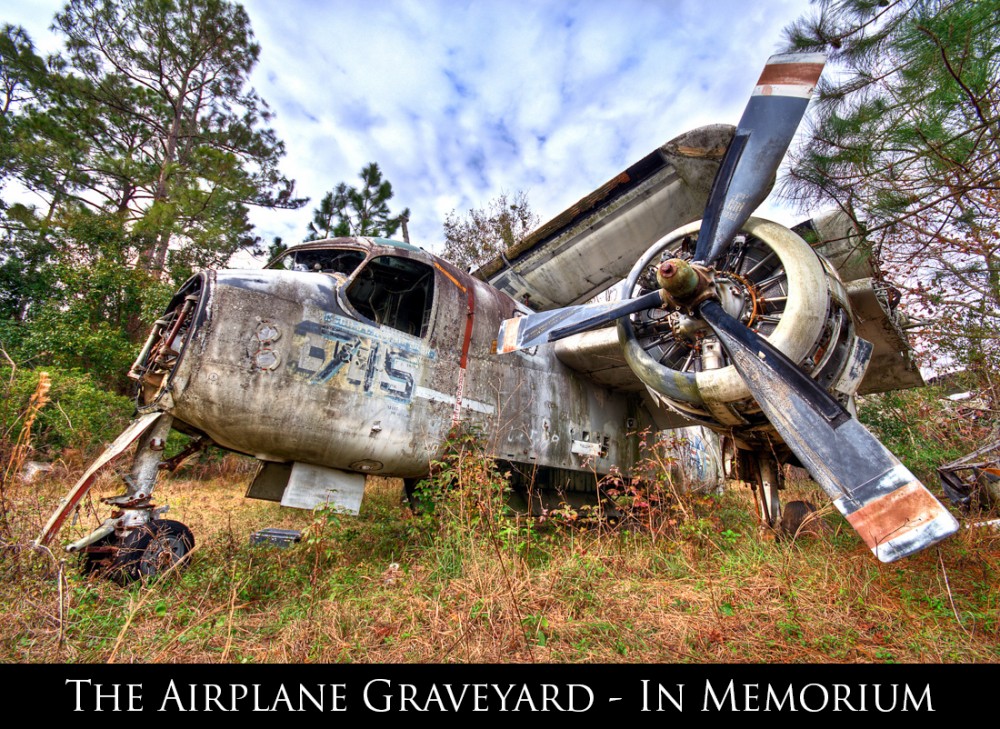 In Memoriam: The Airplane Graveyard

The Airplane Grave Yard was demolished in an unceremonious fashion on 05/11/2011 A metal scrapping company was hired to destroy the lot of 8 planes that inhabited a quiet plot of land just outside St. Augustine, FL.  The current owner listed the property for sale and had the planes demolished and removed.

This is very sad for me as a photographer. These planes were a staple of the landscape, the giant tail fins and cockpits looming from the side of the highway for upwards of 30 years. For locals, the landscape has permanently changed.  The once watchful guardians of highway 1 have been relieved of their post with no further standing orders. From a personal standpoint I feel like I have lost quite a few of my dear friends. As funny as that may sound, these eight planes represented much more to me than a decaying hunk of metal in an overgrown plot of land. They had spirit, character, history, and countless stories to tell.  The maintenance dates stamped onto their fuselages told a great history of service to the United States. Whether they were used in warfare for tracking of submarines and reconnaissance missions, or whether they were used for domestic purposes such as fighting off wild fires, there are countless pilots out there that could tell you incredible stories of the missions these planes flew.

The planes were housed on this plot of land specifically for scrap, the owner selling off pieces of equipment to be used for newer planes as needed.  As the years went by nature began to take her toll. Vines grew up into the cockpits, propellers, and other vital pieces of machinery were removed and sold for reuse as the planes silently slumbered in the field.

The times I visited them became a turning point in my art. I was just getting into Urban Exploration, and photographing abandoned decaying locations. After seeing the sheer beauty that the Airplane Graveyard held, I was completely head over heels in love with the idea of finding and exploring many more locations of its type. These planes embodied everything that I was fascinated with; the juxtaposition of man-made vs. nature, the joy of finding beauty in uncommon places, the oddity of discovering such a unique location hidden in plain sight of us all. The sheer beauty of ‘Nature’s reclamation’ was all around us at the Airplane Grave Yard.

I remember exploring all eight planes climbing into and examining each unique cockpit. Some had vines growing up through them, some had broken windshields, some had a strange lichen growing on the glass that resembled blood, but none the less, each one of them was unique, amazing, and full of life even in its decaying state.

I guess all in all I spent about 18 intimate hours with the planes over multiple visits. It’s an indescribable feeling sitting inside something like this; listening to the dead leaves rustle around in the breeze, looking at the old bundles of copper wires hanging from the ceiling like vines in a jungle, reading old signs and warnings, and advisories printed onto the rusted metal. I guess you just begin to picture the people that flew these planes, and their lives, experiences, and stories. When you start to envision the glory and excitement of what used to be, and combine that with the saddening decay of what remains, you begin to form a bond.  It is something that is hard to put into words.  Something that when you watch the video of these beautiful machines being ripped apart, begins to have the same effect on you.

It’s hard to describe the feeling and emotion I felt while watching the video of the ‘removal’ of the planes. For me it was like watching a friend getting beaten to a pulp and then disemboweled for the world to see. I understand the company that was hired to demolish the planes, performed the task in the manner in which was most efficient, but to watch the video of the planes being rocked back and forth and gutted was just too much for me.

After years of looking at these pictures and sharing them with countless people who had flown these planes, it is much more than witnessing a piece of machinery being demolished. This was the loss of a group of dear friends.  With this demolition, I further recognize the importance of what I, and many other photographers strive do; that capturing of the images of such locations goes far beyond the desire to portray the “beauty of decay”. It also grows out of the need to share the history, spirit, and the stories that these artifacts of history stand for.

So farewell to the war machines of the Airplane Graveyard.    You will be missed. But your legacy and that of the heroic pilots who flew your missions will live on.