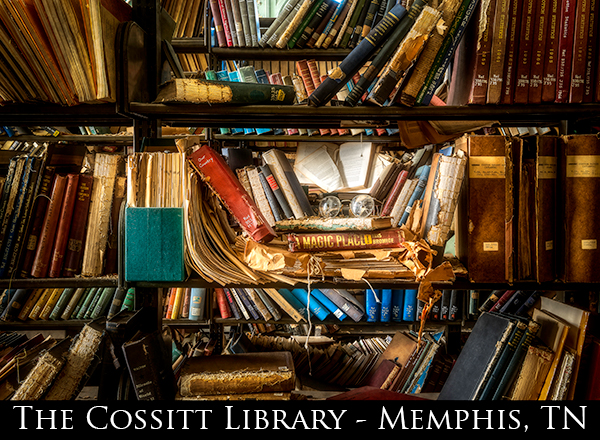 The Cossitt Library in downtown Memphis, is NOT abandoned. Well, not all of it at least. The front portion of the building still serves as the downtown branch library, but the Cossitt has been under threat of closure so many times now, that many Memphians may actually believe that it’s closed. This may sound complicated, but I assure you, the entire history of the Cossitt Library is just as interesting as it is complicated.

A Library Without Books

Memphis’s first public library opened at the corner of Front and Monroe in 1893.  Using trust funds from a wealthy businessman named Frederick H. Cossitt, Atlanta architect L. B. Wheeler designed the building.  Working with a small budget, Wheeler created an impressive Romanesque monument unlike anything Memphis had ever seen.  Unfortunately, after construction was completed the building sat empty for over a year as there wasn’t enough money left to buy any books!

Contrary to the modern relationship of the public borrowing books from the library, the library went to the public asking for books and donations to help fill the shelves. When the building finally opened, it was known as the Cossitt-Goodwyn Institute, and it also housed the city’s first museum collection.

The popularity of the building grew quickly, becoming a major landmark and one of the city’s most photographed buildings. With its growing popularity, the library began the relatively new practice of opening “branches” around town. 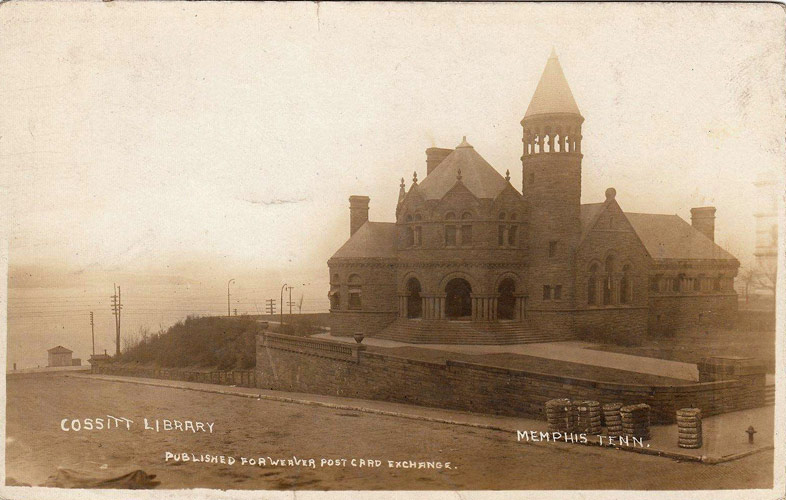 Don’t Call it a Demolition

As the library and its branches filled up, the Cossitt doubled its size in the mid-1920s with an addition onto the rear of the building. By the 50s however, they needed even more space. The library commission began talking about how the building was “unstable” in an attempt to convince the public that they needed a new building. They spoke of its instability so much that it became accepted as a fact. To avoid the negative publicity of a demolition, the commission decided to leave the rear half of the building intact, and only demolish the front (historic) part of the building. Thus, they were able to call it a “renovation” since the rear 1920s addition of the building would still be in use.   The 1958 renovation was an unfortunate attempt at modernization that demolished the front of the building, leaving only vestiges of the old structure thoughtlessly tucked behind a sterile, minimalist box. 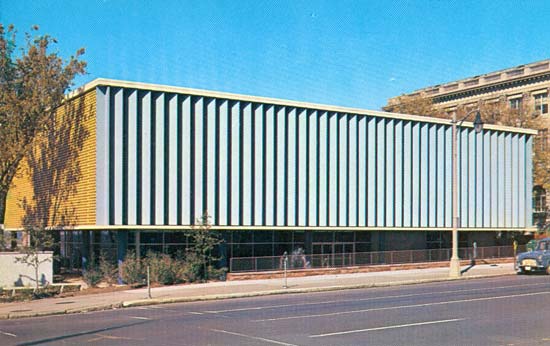 Today, the Cossitt is still home to the city’s public library, though it is now considered a branch and no longer used as much in the digital age. The historic back half of the library is virtually abandoned, and closed off to the public. There are large empty rooms with incredible views of the Mississippi River. Some rooms are simply storage areas, and others are filled with myriad rows of empty metal bookshelves. 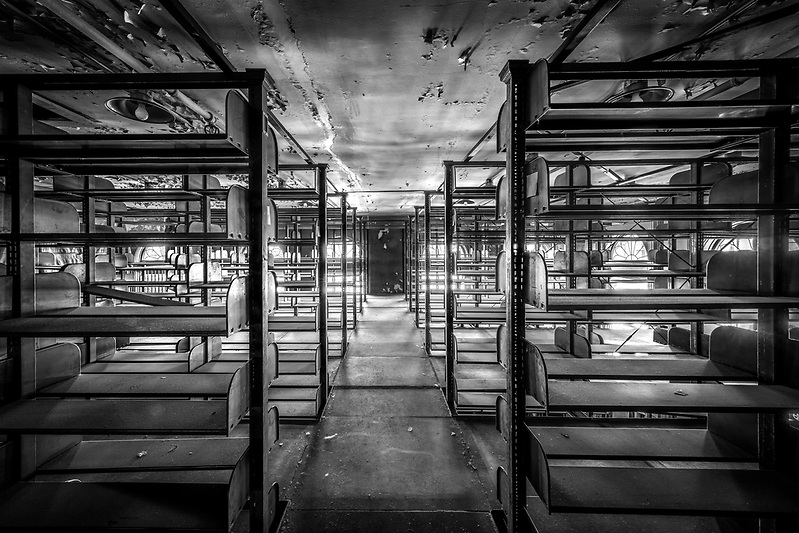 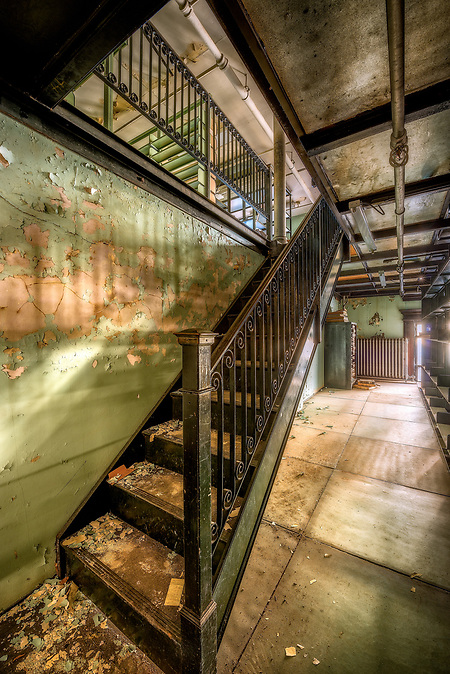 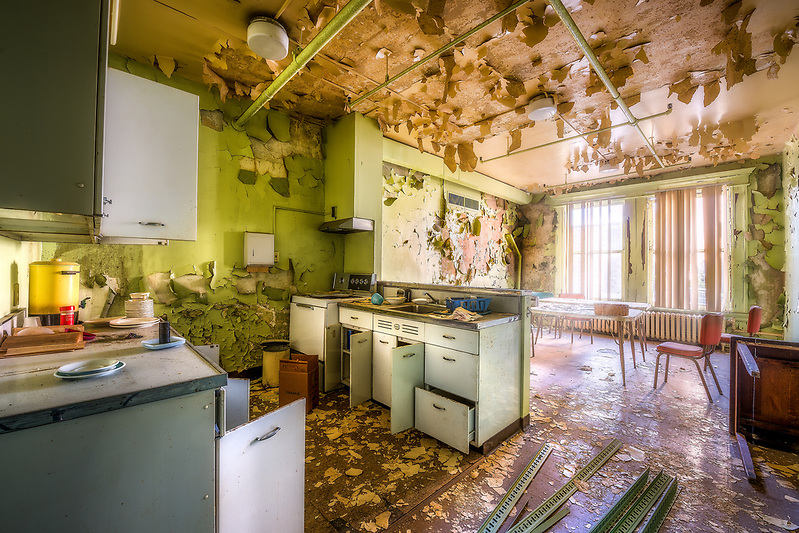 The room I spent the most time in the was home to the library’s abandoned “Stacks” – old books that have been retired from circulation and left to wither in the dust and decay. 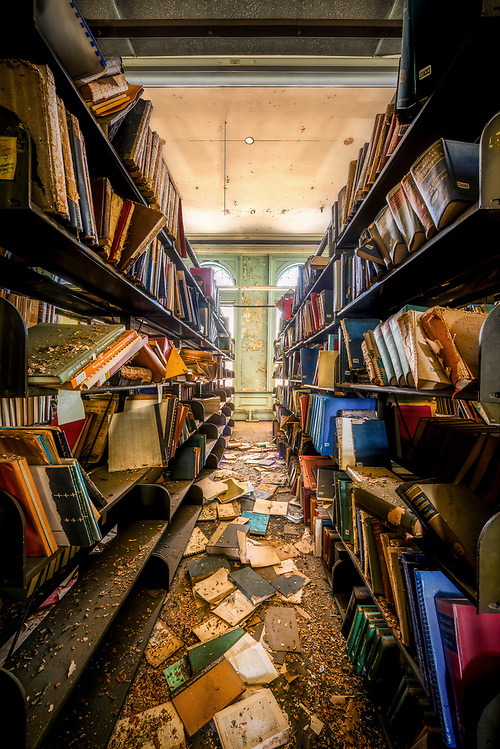 I’d be remiss if I said that I didn’t have flashbacks to the original Ghostbusters film, where the team encounters a “full-torso apparition” in the Stacks of the New York Public Library. And while I never encountered my own librarian ghost in the Cossitt, I’m pretty sure I was just as excited photographing all the numerous scenes of decaying books, as the Ghostbusters were encountering their first paranormal being! 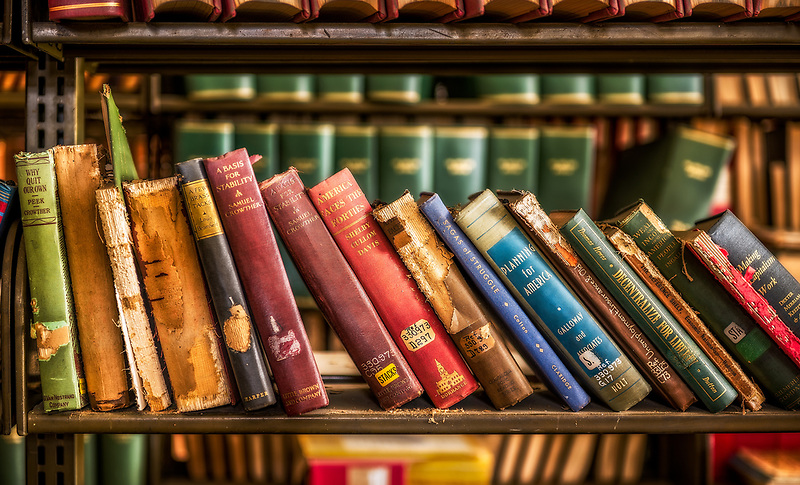 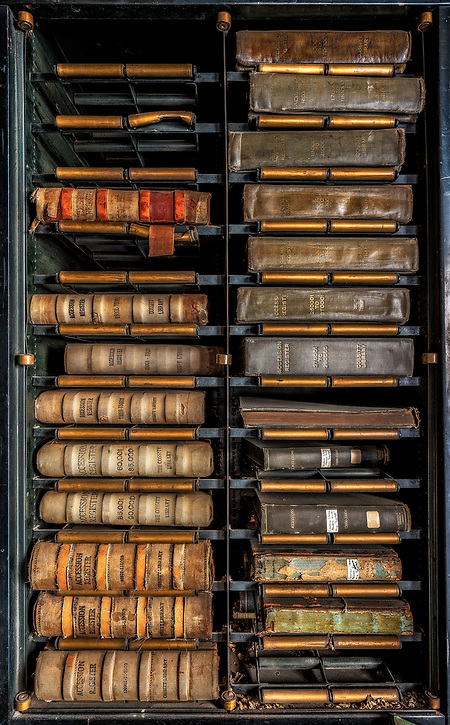 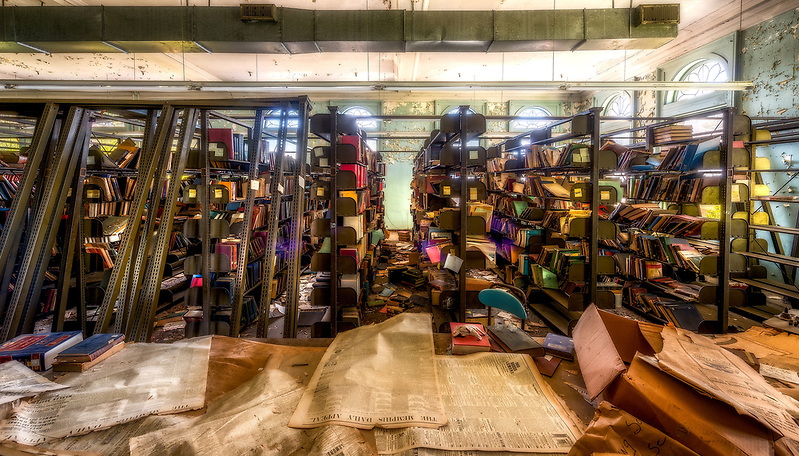 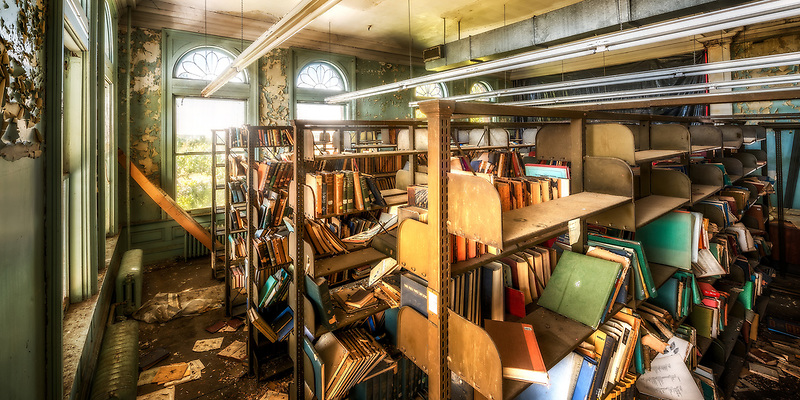 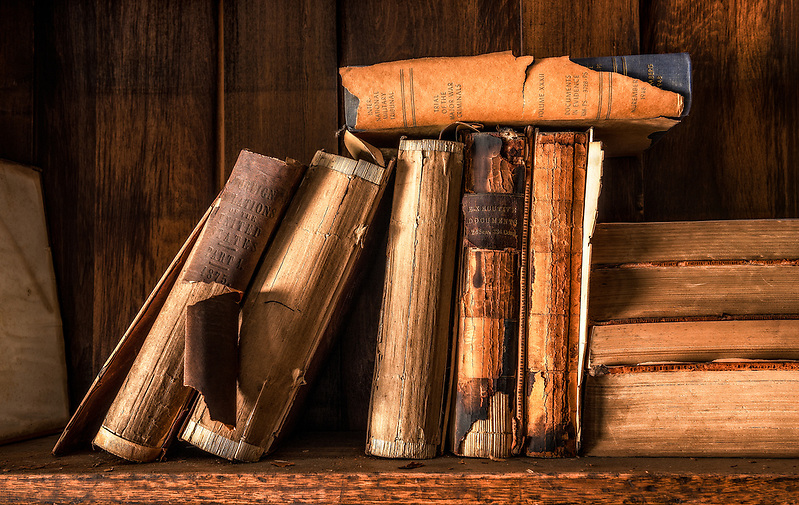 One cinematic work that I did want to pay homage to was the final Twilight Zone episode “Time Enough at Last”. In this episode, a far-sighted bookworm of a man, wakes up to find the world devastated by nuclear war. In his despair, he stumbles upon the ruins of the public library and all the books he could ever want to read for years to come. Elated, he declares that there is finally “time enough at last” to read without interruption. As he bends down to pick up his first book, his glasses fall off and shatter rendering him hopelessly blind to the surrounding books he can now, never read. The image below “Time Enough at Last” pays tribute to that story. 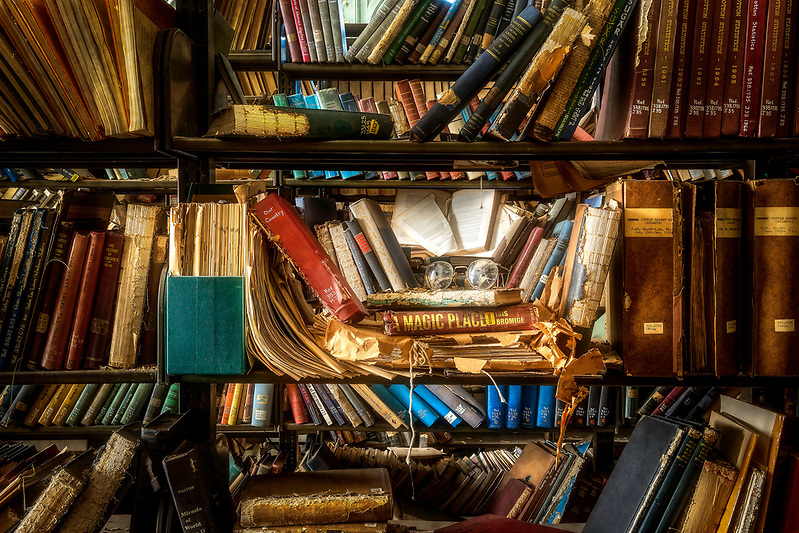 The Stacks had upwards of fifteen rows of shelves filled with books, periodicals, and publications of all ages and topics.  There were books on everything from the cotton prices in Georgia in the 1800s, to “Practical Rabbit Keeping” and (of particular interest to me) virtually every issue of “Popular Photography” magazine since the 1960s. Over the years, rats spent time shredding pages of books into bedding for their nests, the remnants of which lay strewn about the floors in an alphabetic blanket of destruction. 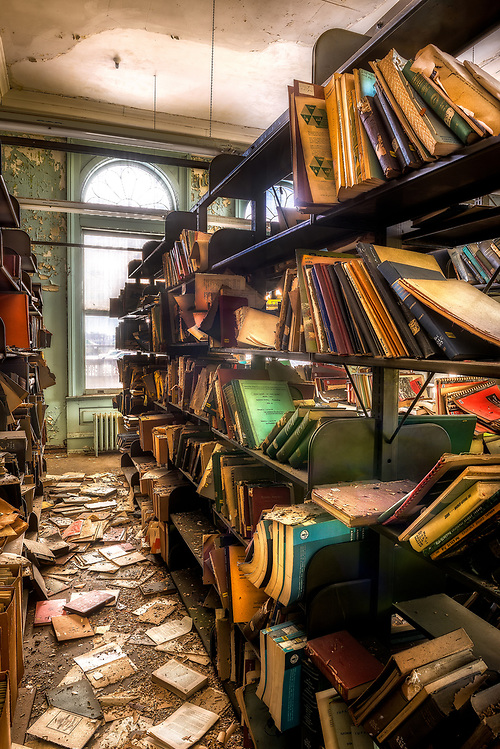 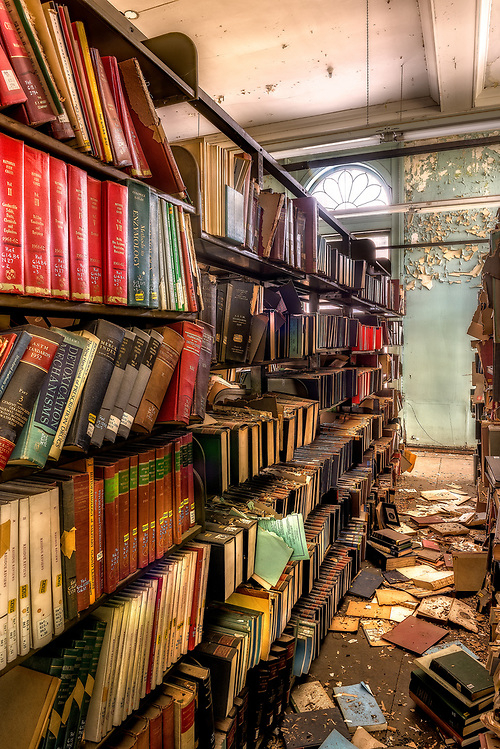 In the same room as the Stacks, were several tables covered in original 1800s newspapers. The 100 plus year old papers were so frail that some would simply crumple at the touch. The library assured me that they had all been scanned into microfiche, but it was still a shame that some of these old papers with vintage advertisements and news stories were not physically preserved behind glass or via other archival methods. “Plan for the future — because that’s where you’re going to spend the rest of your life.” – Mark Twain

There is hope for the future of the Cossitt library and the extremely valuable real estate that it sits upon.  A $10 million dollar “Civic Commons” grant will be given to help improve the property and contagious properties along the bluff.

The Memphis Commercial Appeal interviewed the director of libraries Keenon McCloy, about the possibilities of the Cossitt being “reimagined” and reinvigorated via such a grant: “That’s our desire, if we can make it work financially,” says McCloy of bringing back the 1920s building as part of a revitalized Downtown library. “We’ve brought a lot of people up here and they’re always surprised at how beautiful it is and are reminded of what it could be… We’re looking into adaptive reuse studies now. We’re hiring engineers to come in and examine the building to [confirm] the stability. How do we use these spaces in a way that increases the value for the Cossitt and for the public? This, right now, holds no value. It’s just sitting here.” (SOURCE: The Commercial Appeal)

Even though the grant and civic commons project have a three-year timeline, the plan is to leverage this momentum into a public conversation about what the future of the parks and libraries mean to the people in Memphis. They want this project to help lead the way, not just mimic what other cities have done, but to push forward in new directions that help keep the public library, and everything that it stands for, relevant in the modern age.

A BIG thank you to June West and they entire staff at Memphis Heritage, for all they have done (and continue to do) in and around Memphis. Please, if you enjoy my work that I have done in Memphis, consider donating to, and becoming a member of Memphis Heritage. The work they do giving Memphis’ past a future, is vital!