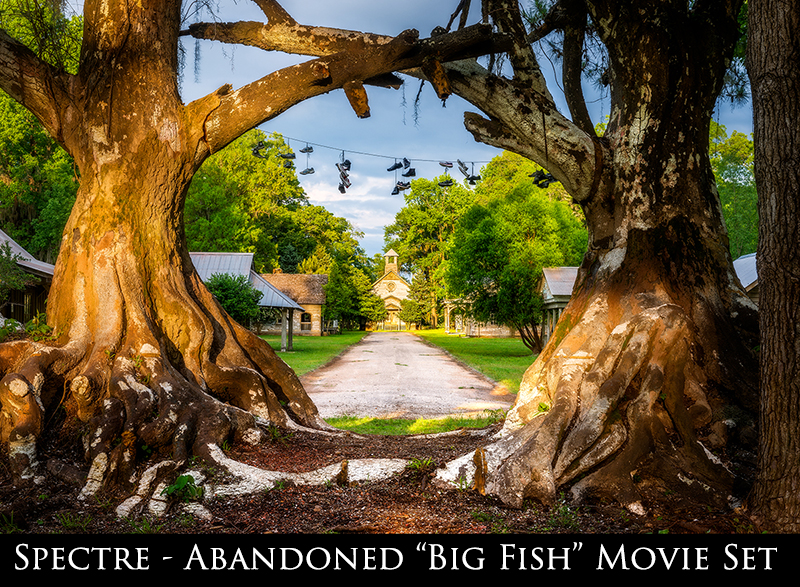 “There are some Fish that cannot be caught, it’s not that they are faster or stronger than other fish, they are just touched by something extra.” This is the opening line, spoken by Edward Bloom (played by Ewan McGregor) in Tim Burton’s film, Big Fish. Anyone who has seen the film, will probably agree that the movie itself, is indeed touched by something extra. Based on the 1998 novel of the same name by Daniel Wallace, Burton’s Academy Award nominated film, left a mark with its tour de force of stunning visuals, tall tales, and big hearts. It also left something behind… The town of Spectre.

Apart from a scene filmed in Paris, Big Fish was filmed in entirely in Alabama. Principal photography began in January of 2003, and filming was completed on time, and under budget ($70 million), in just two months. During this time, the town of Spectre was born.

Burton’s crew scouted out Jackson Lake Island near Millbrook, Alabama, and found that not only would it be a perfect location for the town of Spectre, but they could film other key scenes on the island. The lady in the water scene, Jenny’s house, the enchanted forest, and several others, were all filmed on and around the tiny island. The entire town was custom built for Big Fish. 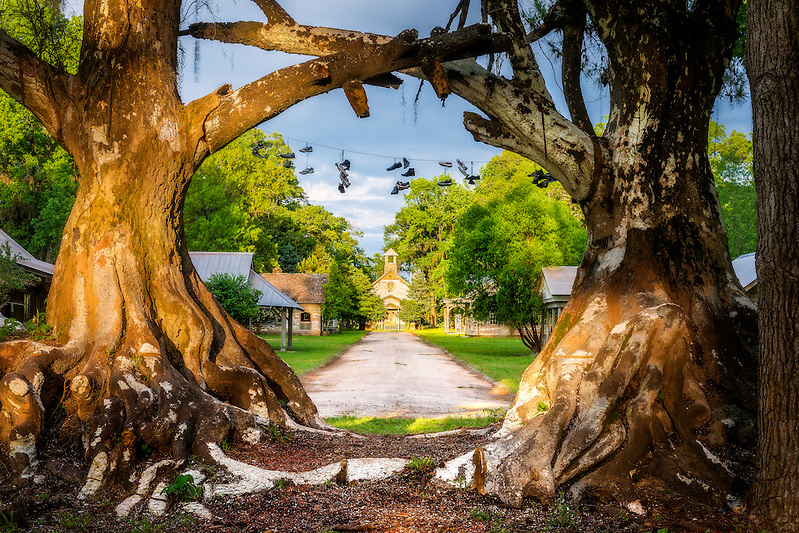 Scene from the movie below: Since these buildings were made for the set, most were built with plywood, without interiors, and were unfinished on the back. These houses and buildings were never meant to be inhabited, or even last longer than was needed for filming, which makes it all the more incredible that they are still here over 13 years later. 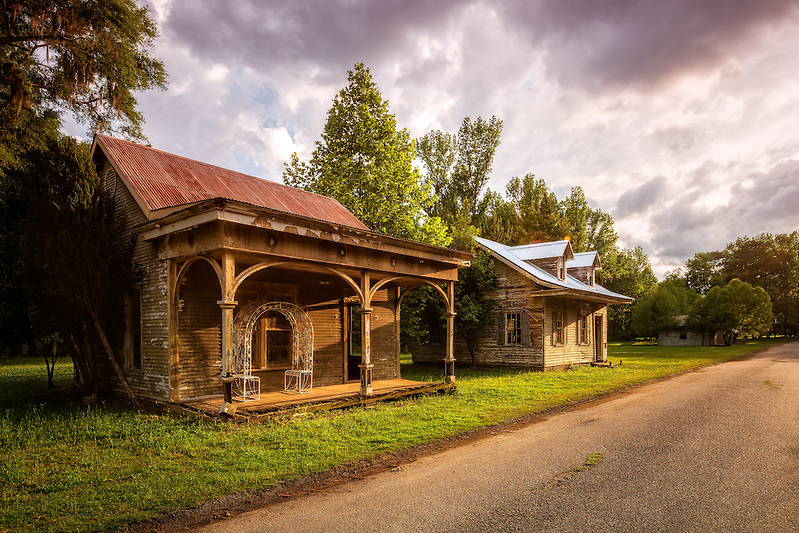 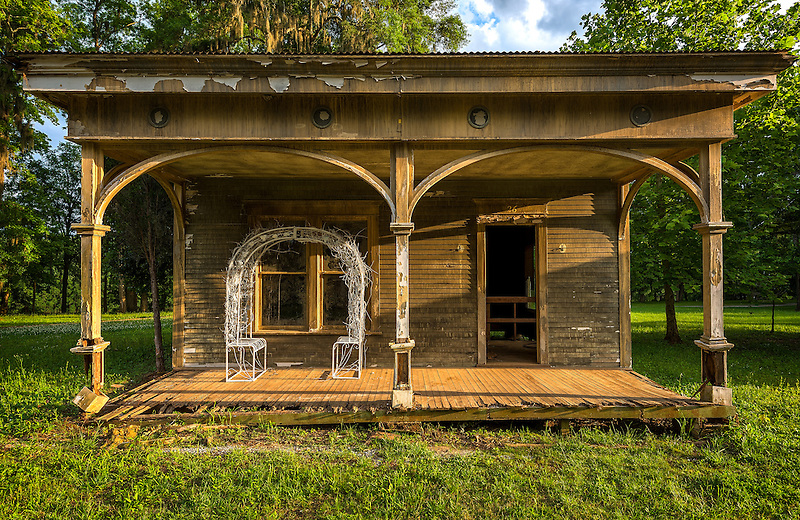 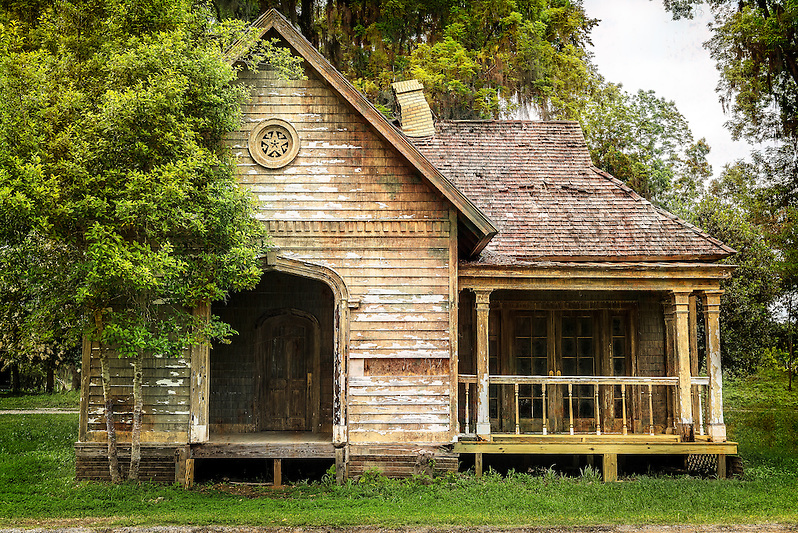 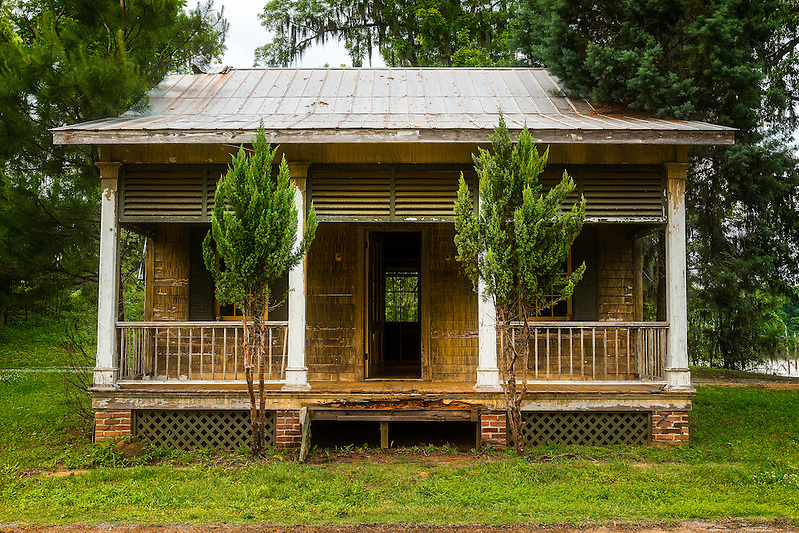 In the film, Edward Bloom travels through a dark foreboding forest, his hat stolen by a crow, stung by wasps, attacked by a slew of jumping spiders, and eventually stumbles into the too-perfect-to-be-true, town of Spectre. The circular portal of old trees that is his entrance into Spectre, is still there today, and if you look closely, you will find that they are not trees at all, but Styrofoam movie props! The trees were created by forming a wire mesh around a steel skeleton, and then blowing Styrofoam into the mesh. They were then sculpted, sealed, and painted to look lifelike. Some of the surface has been worn away over the years revealing the Styrofoam beneath. 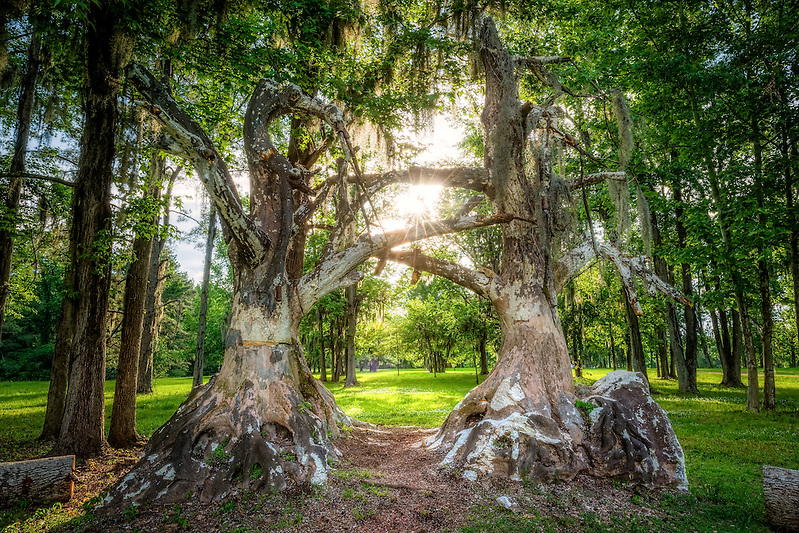 There’s an Easter Egg in the movie! – The very first person we see in Spectre is a man on a porch playing “Dueling Banjos”. This actor is actually Billy Redden who played Lonnie in Deliverance in 1972. Burton’s crew did some detective work and found Redden who was working in a restaurant a few hours away and brought him over for the scene. Bloom gets invited into the Mayor’s house (which was the only building with a finished interior). While eating apple pie with the Mayor and the Poet Laureate, Norther Windslow (Played by Steve Buscemi) little Jenny steals the shoes off Bloom’s feet and races down the greenway to the edge of town where she ties them together and tosses them up and over a wire. Over the years as people have come to visit the old film set, they have taken up the tradition of tossing their shoes on the wire: 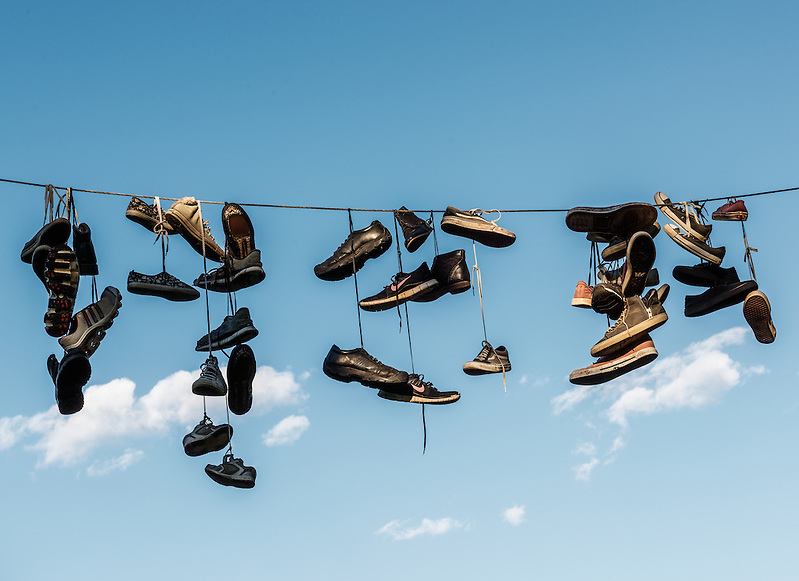 Windslow says “There is no softer ground than town”, indicating that Spectre is a place that you would never want to leave, and thus everyone leaves their shoes up on the wire. The ground was soft indeed. All of the bright green grass covering the town of Spectre was real. Acres of sod had been brought in, laid out, and meticulously irrigated using sprinkler systems fed from the lake surrounding the island in preparation for filming. The centerpiece of town is the church at the end of the street. The church was built with all four walls hung and strung together internally by steel wire.. 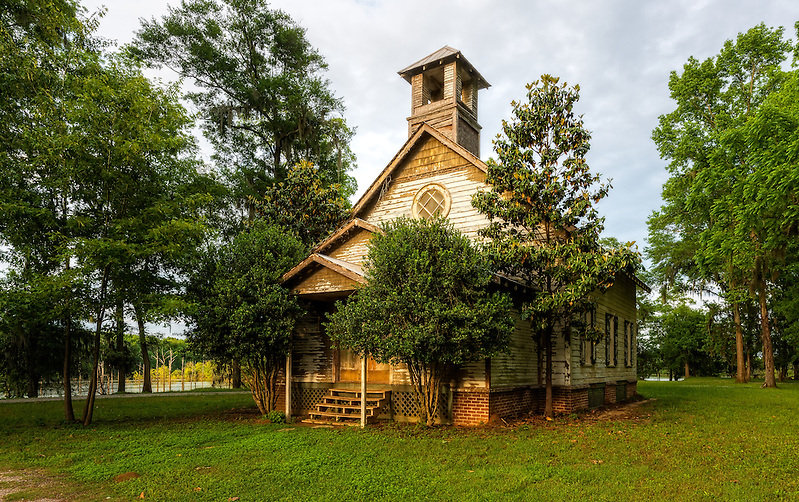 Later in the film, Bloom revisits Spectre to find it has fallen on hard times. The film crew needed to create a state of disrepair. Chemicals were sprayed on the buildings’ walls and large plastic sheets were placed on top. When the chemicals dried and the sheets were removed, the paint was cracked and peeling giving the look of aged and weathered siding. They also removed much of the grass and paved a road down the center of town. 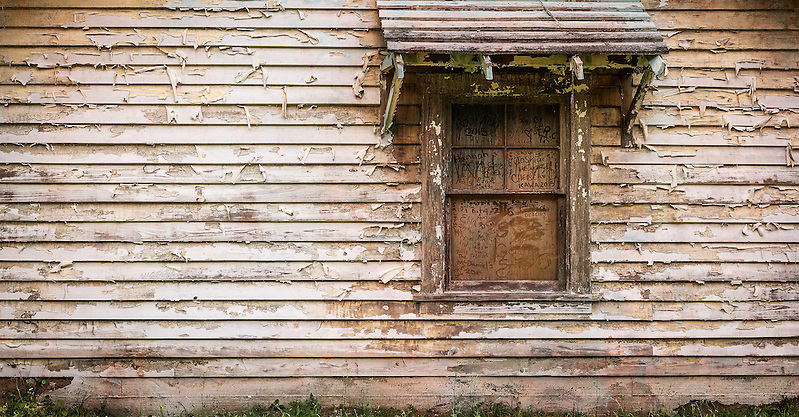 Today, the town of Spectre and the island it sits on (Jackson Lake Island), is owned by Bobby and Lynn Bright. They inherited the island in 2014 when Lynn’s mother died. They are actively doing their best to save and preserve the remaining seven buildings. Over the past few years they have worked to clear out the overgrowth, pulled vines off the church, and “hired” a small herd of goats to help keep the grounds clear. (As I photographed, the goats were my overly curious and constant companions, until the noise of my camera drone frightened them away.) Some of the rotting wood porches have been patched up and repaired, and a few new roofs have been installed, but there is still much work to be done to ensure the fictional town sticks around for many years to come.

The Brights continue to operate Jackson Lake Island as a recreational spot for fishing, camping, kayaking, and gatherings. About 12,000 people visited the island in 2015. To gain access, you pay a $3 gate fee, and can spend the entire day there. Spectre is well loved, and in good hands with the Brights. For more information on camping and fishing, visit the Jackson Lake Island Facebook page.