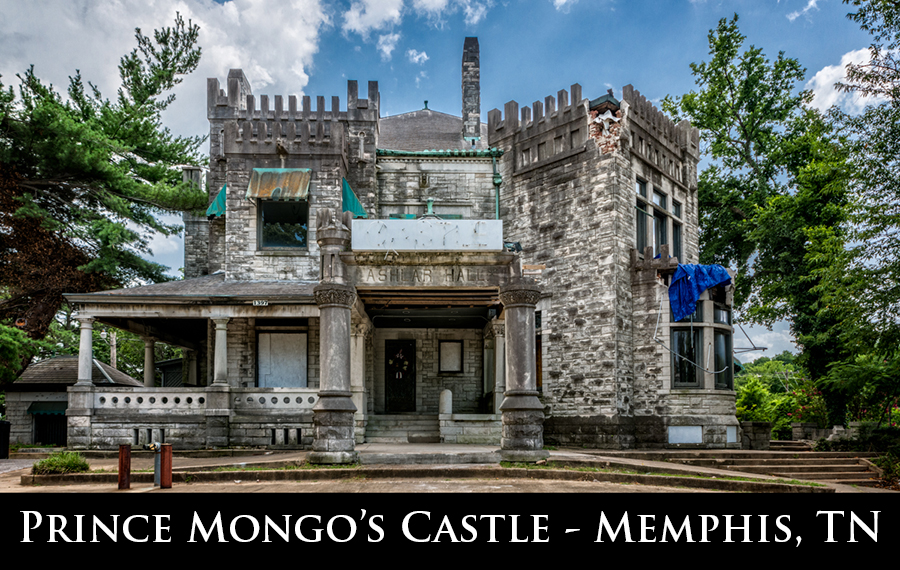 I would like to thank June West at Memphis Heritage for her efforts to help save and preserve Ashlar Hall, and countless other endangered Memphis locations. If you enjoy this blog, please consider joining/donating to your local historic preservation group. The work they do is incredibly important.

Picture the scene: The year is 1990. You are a wealthy, eccentric, self-proclaimed alien-prince from the planet Zambodia, and you just bought an epic castle in Memphis. What do you do? You turn it into an infamous nightclub that would make the characters from Wayne’s World say, “Schwing!!” At least that’s what Prince Mongo did. No, this is not a lost storyline from a Max Headroom episode, this is the strange and unusual tale of Ashlar Hall, Prince Mongo’s Castle. But first let’s re-re-re-re-re-wiiiind-ind-ind-ind-ind back to the year 1896…. Robert Brinkley Snowden, an architecture graduate from Princeton, and a premiere real estate developer in Memphis, built Ashlar Hall in 1896. Named after Ashlar stone, the predominant building material used in the construction of the Gothic Revival Mansion. It was built for around $25,000, the equivalent of $725,000 by today’s standards. Snowden was Memphis royalty. He was the owner of the famous Peabody hotel which was opened by his great-grandfather Colonel Robert C. Brinkley. He donated land for the Snowden School which was named for him, and is still open today. Snowden died in 1942, and by 1960 upkeep on the castle became too difficult and expensive for the heirs, and they filed an application to allow non-residential use of the building. From the 60s through the 70s it functioned as a restaurant, and the front lawn was paved over to provide parking for the guests. Enter Prince Mongo; a 333 year-old alien-ambassador from the planet Zambodia. Or Robert Hodges, if you prefer to use his earth given name. Mongo is famous (or some would say infamous) for his creative and bizarre public persona. According to Mongo, he was sent here by the great Zambodian spirits, to save the city of Memphis, and protect it from natural disasters. Dressed in wildly stylized outfits, Mongo often sports a set of steampunk goggles, long blonde wig, and various accessories including a military bandolier loaded with tiny rubber chickens instead of bullets. He refers to everyone he meets as “Spirit”, and if you’re lucky you might receive one of his “blessings” by way of him tossing white flour on you. The American Pickers found this out when they paid Mongo a visit in 2014 (season 6, episode 29). Every year since 1978 he has run for Mayor of Memphis, never winning although he came in third one year. He still attends debates, even proposing some legitimate solutions amid his other wildly bizarre and humorous ones. On a pamphlet for his candidacy he stated “Mongo will restrict the duties of the ignorant City Councilmen according to their mentality. They will feed the criminals on Dead Man’s Island from canoes during hurricanes.” However this humorous jab at the local government is followed by statements like” Mongo will donate all of his salary to charity.” And “Mongo will provide homes for the poor and needy, free utilities, and free transportation.” No one seems to know where Mongo’s money comes from, but he appears to be quite well off with homes in Memphis, Miami, and Cashiers, NC. He even has a yacht to accompany his two million dollar mansion in Miami. He also appears to be somewhat of a philanthropist, donating to and promoting St. Jude Children’s hospital.

Mongo certainly marches to his own beat. There is a great video interview with him from back in the 80s on YouTube that you can watch and get a better understanding of his zany antics and creative character.

In the early 90s Mongo purchased Ashlar Hall and turned it into The Castle Nightclub. I had an opportunity to speak with Mongo over the phone about his time owning Ashlar Hall and this is what he had to say:

“It’s full of ghosts, but they’re good ghosts. They used to visit with me all the time. They would summon me upstairs to the attic and I would hear them tapping on the pipes and I’d tap back.” He said that shortly after he bought the building an old man came by and asked him if the air conditioner was still in the attic. The old man said that when he was a young boy in the early 1900s he would play with one of the Snowden girls and they would go up to the attic and watch the servants load ice into a box. The ice would melt and the cool water would flow down through the pipes and provide some measure of cooling for the house. Mongo believes these taps on the pipes were coming from the ghosts of the slaves who used to work there. 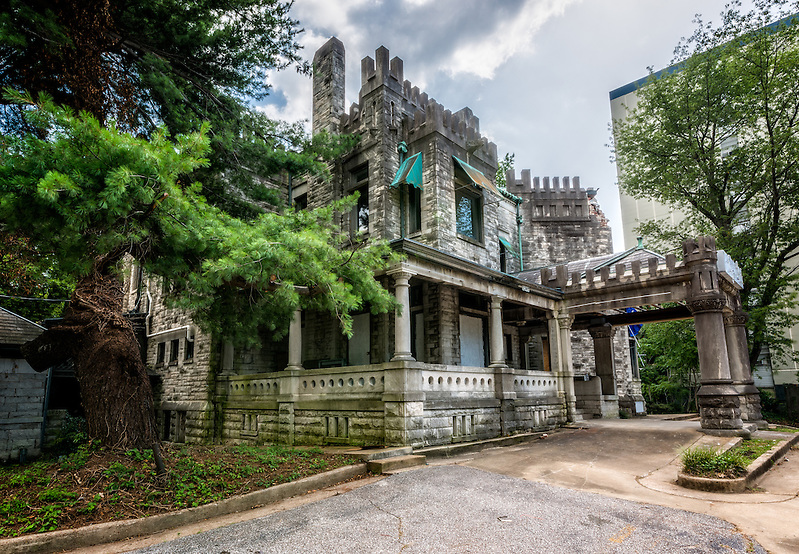 I asked Mongo about the interesting décor of the place and what drove him to festoon the building with large metal art installations. Some had old CRT TVs mounted inside them, and there was a huge metal chandelier dominating the great room in the center. He said, “All those were done by an artist in Houston. I wanted to combine the past with the future. The chandelier in the center was to be like Earth falling. The lights would shine through them all.” 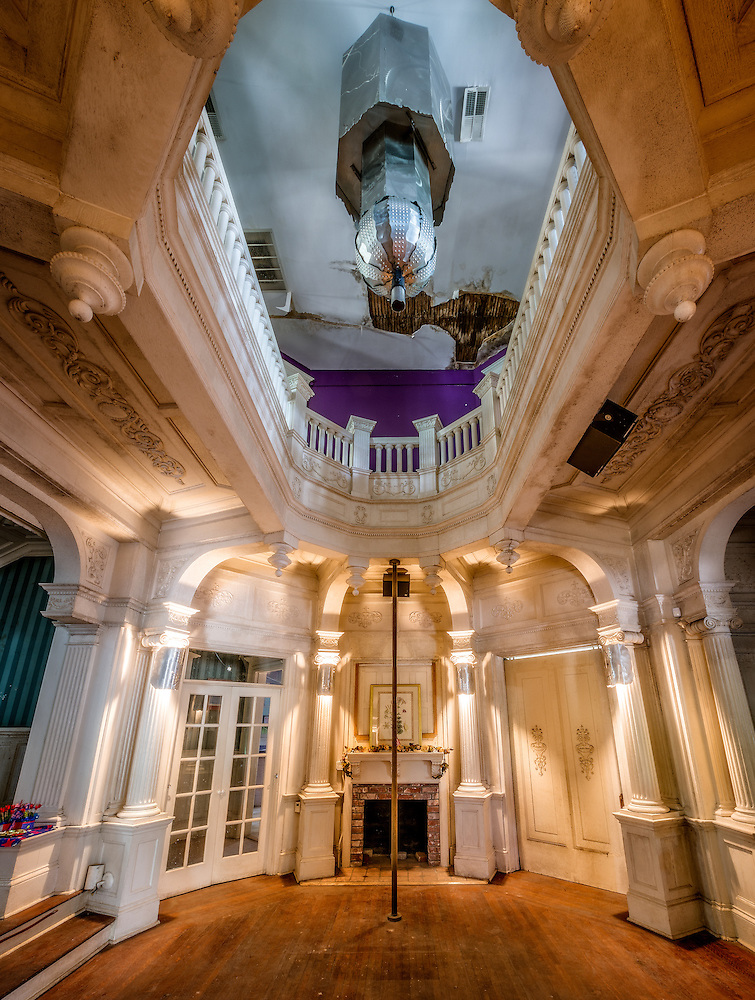 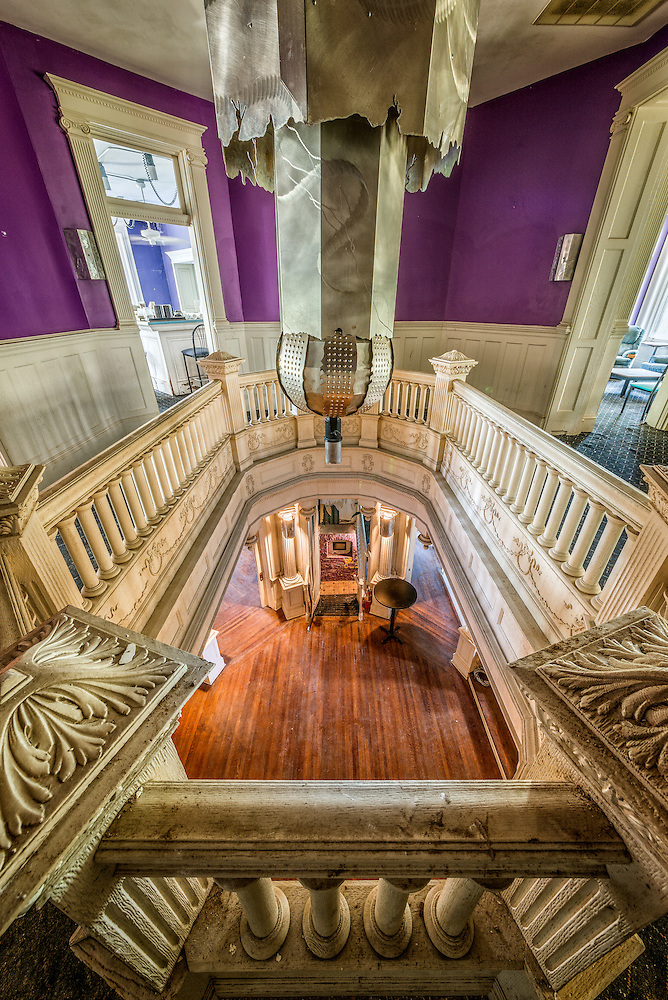 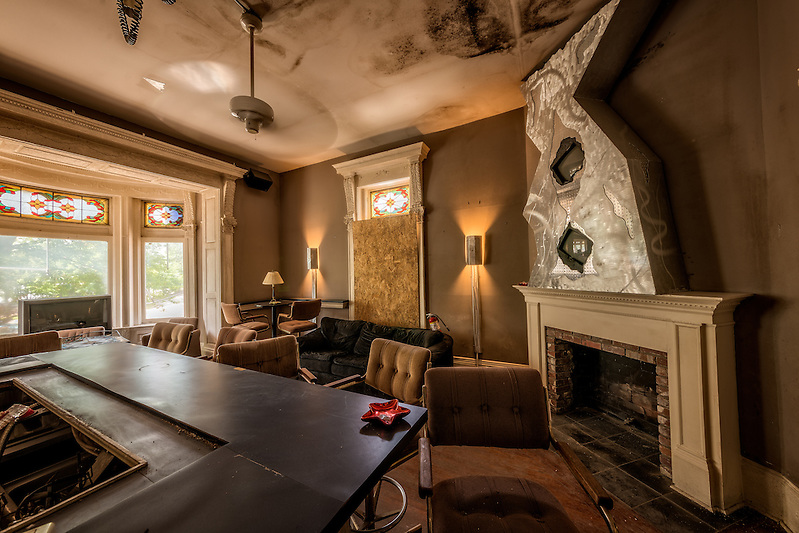 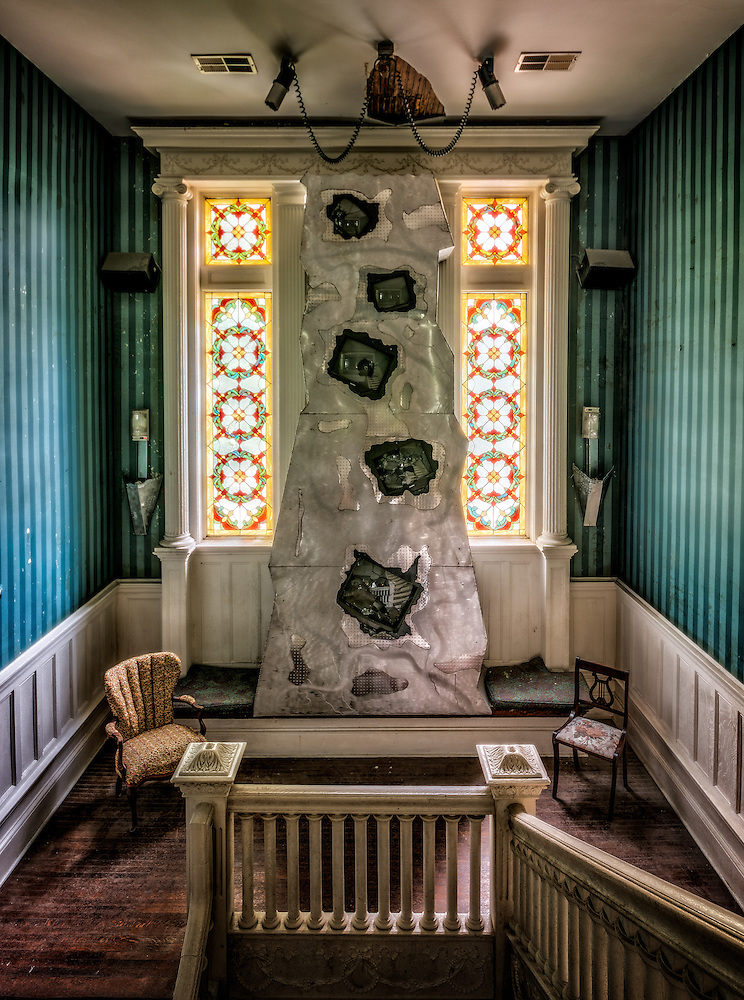 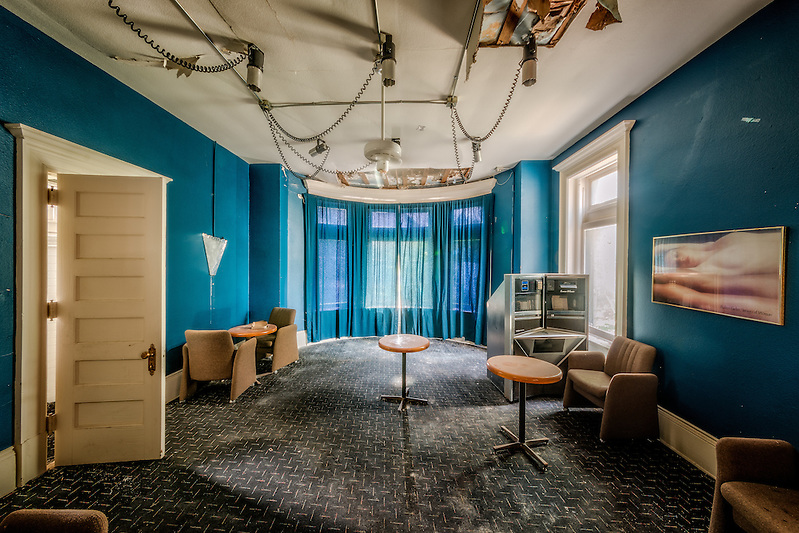 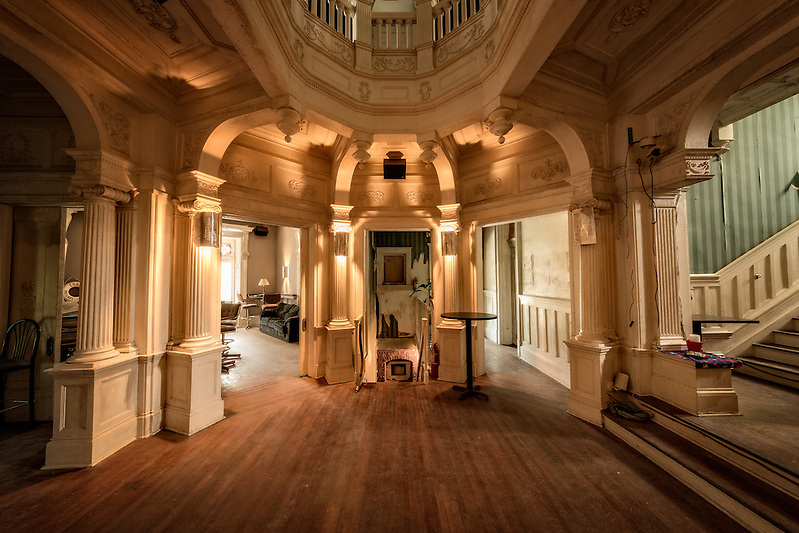 When I asked him if he had any interesting stories of the parties and times spent at the nightclub he simply said, “It was a landmark in Memphis, and the people who came out were like a big family. We never had any problem with the people there, there were no fights and no shootings.”

Unfortunately the neighborhood didn’t feel the same way about The Castle. It quickly became an infamous nightclub with rumors circulating about underage drinking especially after two underage girls were killed in car crash after supposedly drinking at The Castle. Mongo was able to skirt the law by owning the building, but “gifting” the business to an employee, thus exonerating himself from legal complications as he was simply the landlord. He claims to be innocent of any underage drinking accusations. 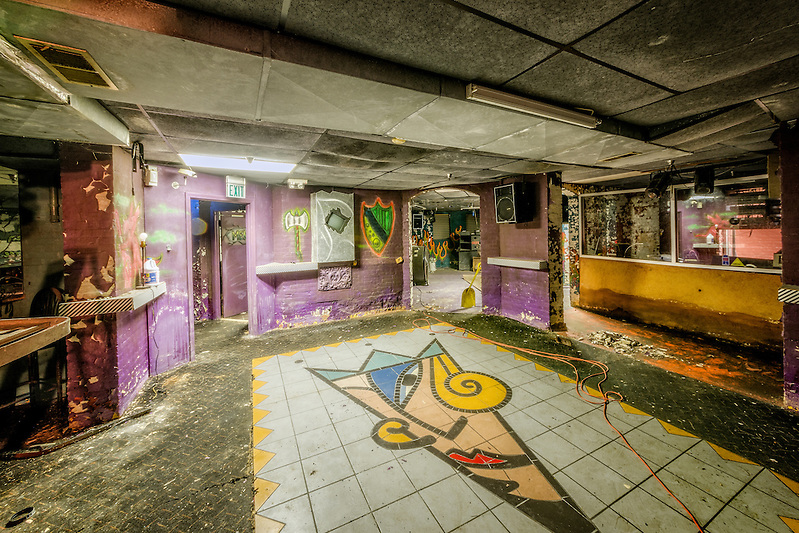 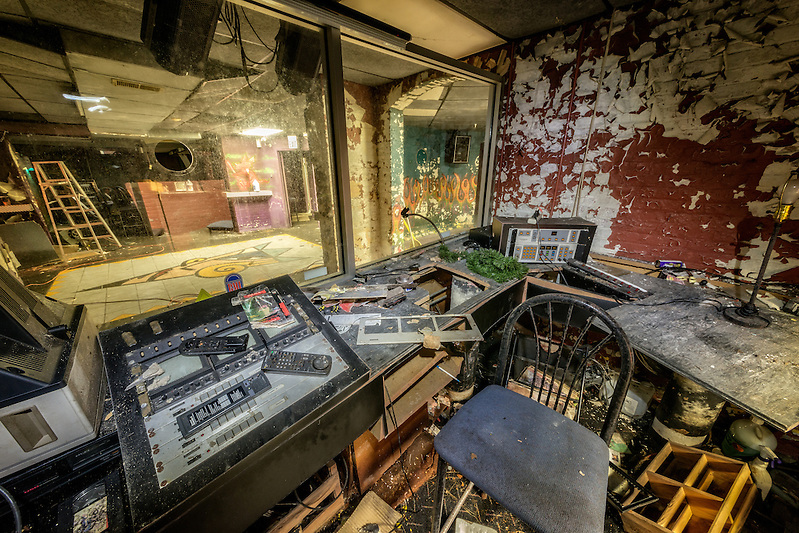 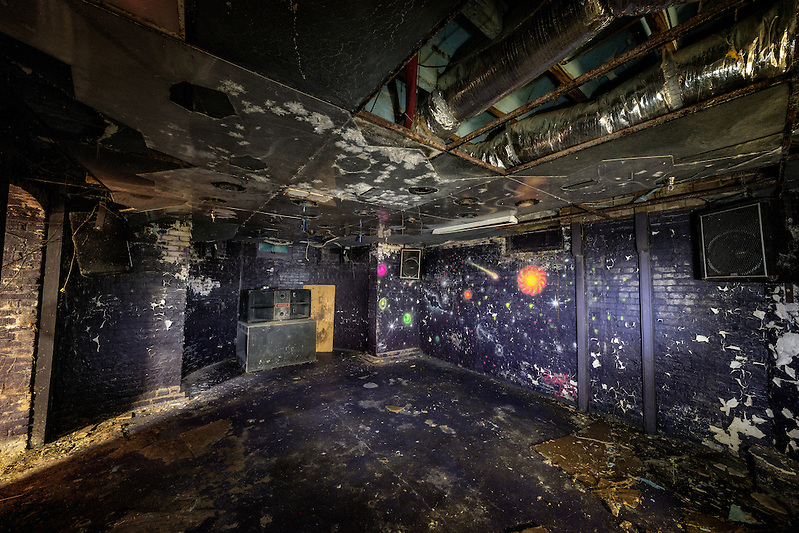 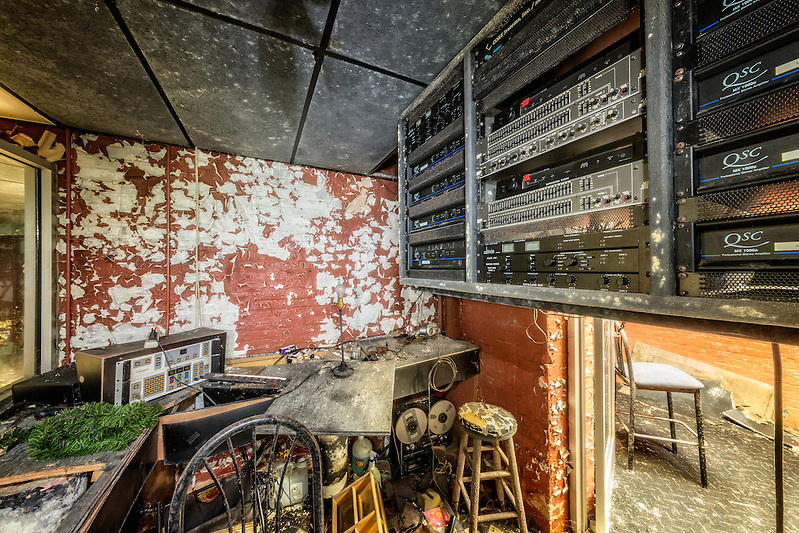 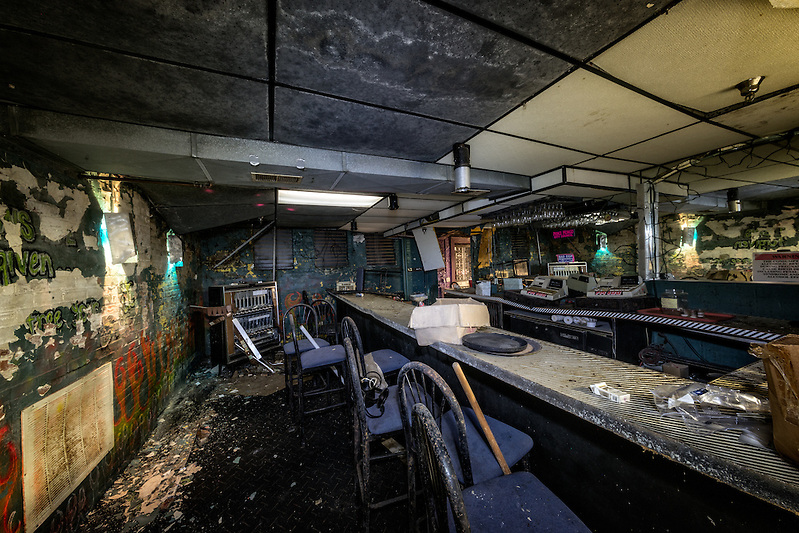 At one point the Fire Marshall lowered the capacity for guests inside the castle. When Mongo was found to be in violation of the new lowered capacity, he responded by bringing in 800 tons of sand and turned the parking lot into a “beach” and brought the party outside! Over the years and after complaints from neighbors in a nearby apartment building, the city began taking action against him by responding to noise complaints, labeling the venue as a nuisance. They finally shut the Castle down in the late 90s. 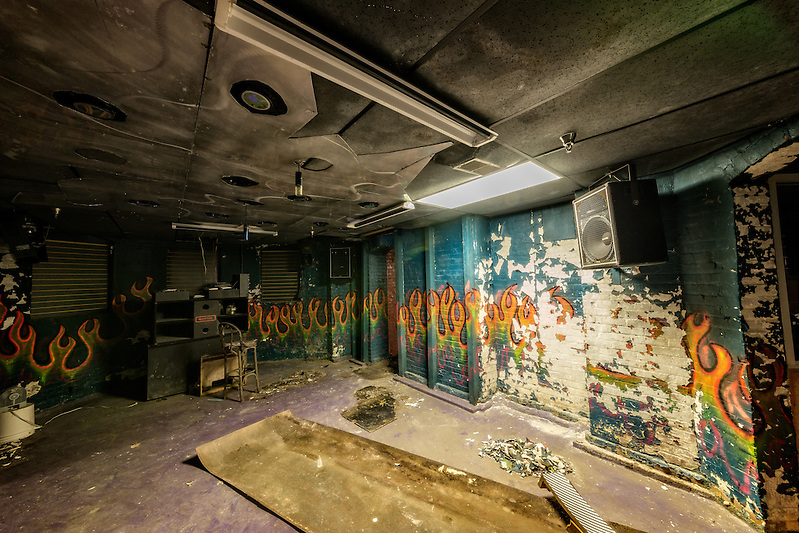 Mongo continued his ownership of the unused building until a few years ago, when mounting fines and environmental court issues became too much. He quit-claimed the building to Kenny Medlin who now owns the land and is trying to figure out what can be done to save it. The most recent news out of Ashlar Hall is not of the good variety unfortunately. A contractor that Medlin hired pulled apart the roof, stole a significant amount of copper and much of the restaurant equipment from the building, and skipped town leaving the property in much worse condition than it already was. Williamson is still missing with a warrant for his arrest for “theft of services, passing bad checks, and illegal possession of credit/debit.” The battle to save Ashlar Hall continues… 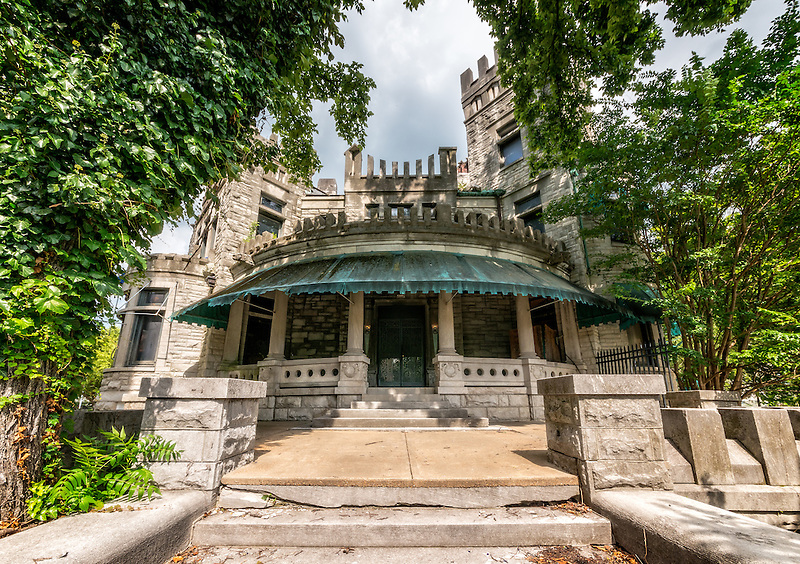