The Castle on the Hill – Jackson Sanatorium

“Founded on rock. For suffering ones and weary.
A home, secure from worldly care and strife.
Nature, the healing mistress, tends its portals.
Beckoning with gentle hand to paths of life.”
-K. J. J.
After exploring the amazing ‘modern ruins’ of Grossinger’s Resort, Andy and I had Urban Exploration fever! So a few days later we made plans to go explore Jackson Sanatorium in Dansville NY. Here’s a short history of Jackson:
The Jackson Sanatorium was founded in 1854 by Nathaniel Bingham and was established ‘for the scientific treatment of invalid, and for the recuperation and rest in cases of overwork and nervous exhaustion.’ Jackson, ‘The Castle on the Hill’, was conducted as a Health Institution and not as a ‘fashionable resort’. The surrounding wooded area, temperate climate, and sources of natural springs and mineral waters were what drew the founders of Jackson to that area. The natural mineral waters were prescribed for many kinds of chronic ailments. The main building at Jackson was made from brick and iron and was marketed as “Absolutely Fire-Proof. The cost of renting a room in the main building ranged from $17.50 – $35.00 per week for an individual. Jackson could accommodate only 300 guests. 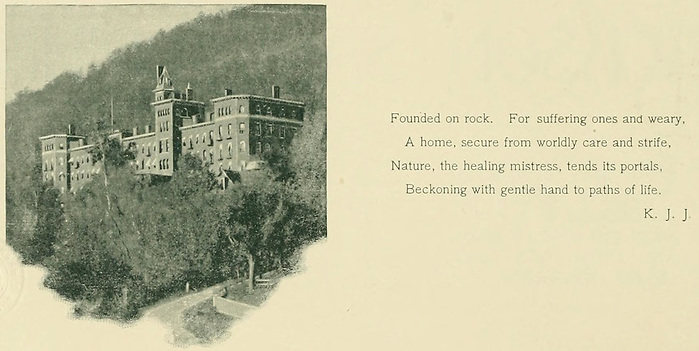 The morning we left, Elmira had its first snow of the year. In town there were light patches of snow on the ground, and flurries floating through the air. As we passed through Corning and Painted Post, the snow picked up and the hills were covered like “Frosted Mini Wheat’s”. We had high hopes of being able to get some snow shots at the sanatorium, but those hopes were dashed as we descended into the Dansville valley where the snow faded, and everything was just wet.
We parked in a parking lot about a quarter mile from the sanatorium, and loaded up our gear. This time we remembered flashlights! We walked up the hill, ignored a no trespassing sign as we walked around a locked gate and followed a grassy path. On the way we passed several abandoned decaying houses that were slowly rotting and crumbling away. As we walked along a grass path the sanatorium came into view: a beautiful 5 story red brick building, perched majestically on the side of the hill looking down at the small town of Dansville NY. 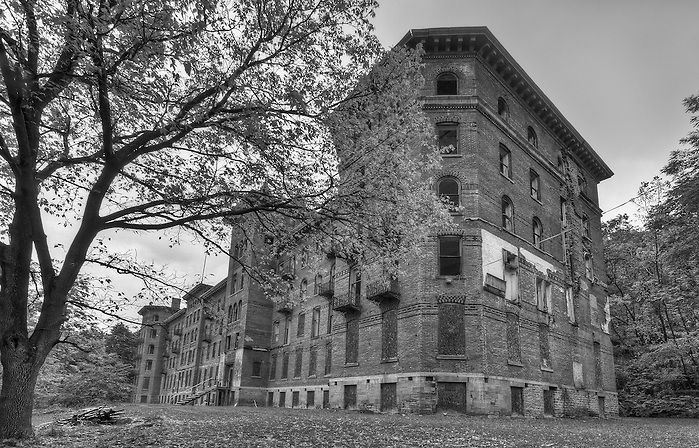 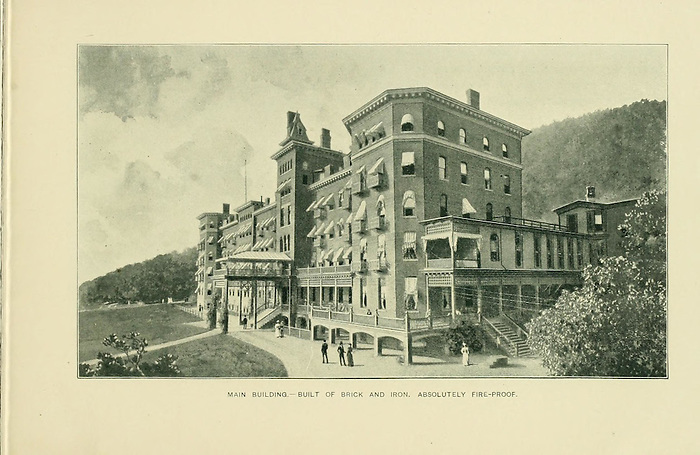 Rain drops trickled out of the sky on to us and our gear as we setup outside the building and shot our exterior shots. 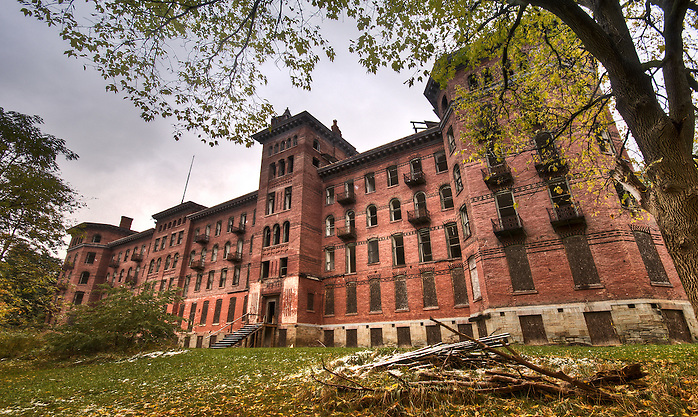 We marveled at the beautiful arched windows and wrought iron balconies that evenly dotted the outside of the building. 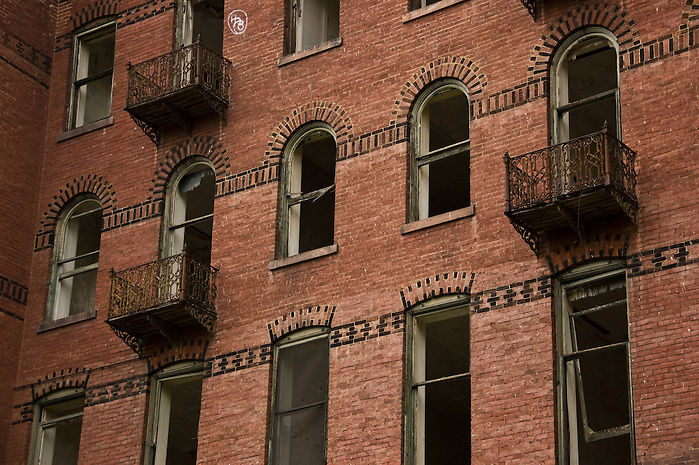 The building was 300 feet wide, but its depth was relatively shallow, maybe no more than 40 feet. On the short side of the building we noticed a massive scar; from the fourth floor down to the second, a large gash was cut into the brick. As wide as the windows and two stories tall, the wound opened up to show empty decaying rooms inside and provided an interesting glimpse into what a cross-section view of the building might look like if you sliced it in half. 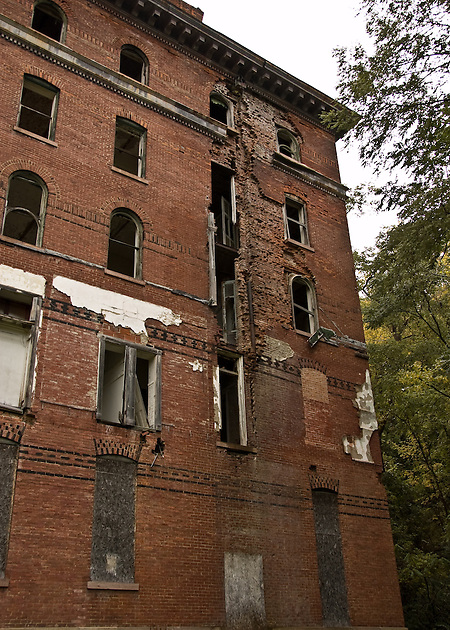 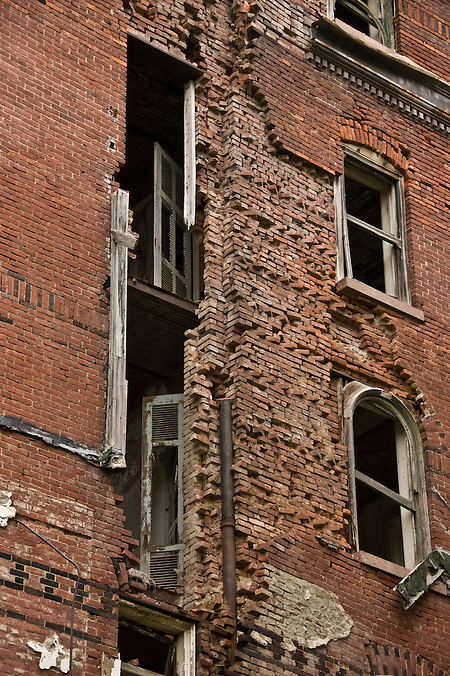 After making good use of our wide angle lenses, we walked up to the front door. We walked up the wooden stairs and entered into the main reception hall of Jackson Sanatorium. On our right a set of stairs led downwards into the pitch black basement. Above us, an iron railed staircase began its circling upward journey, dizzying us as we followed it up to the fourth floor with our eyes. 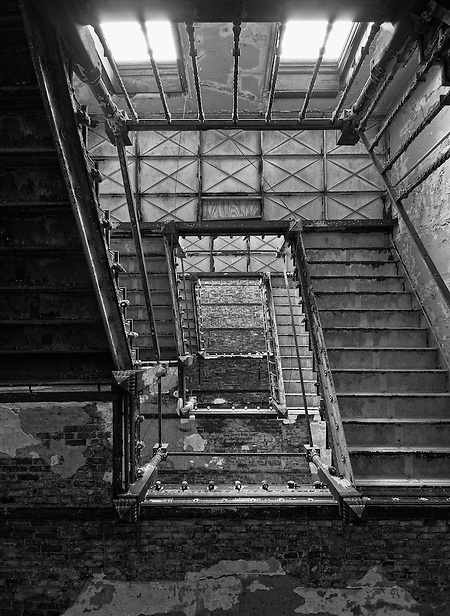 In front of us a set of columns and arches presented themselves as remnants of what once was front desk or receiving area of the building. 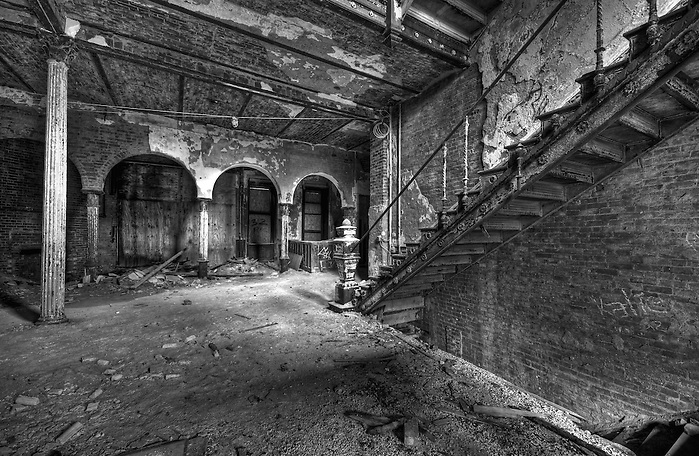 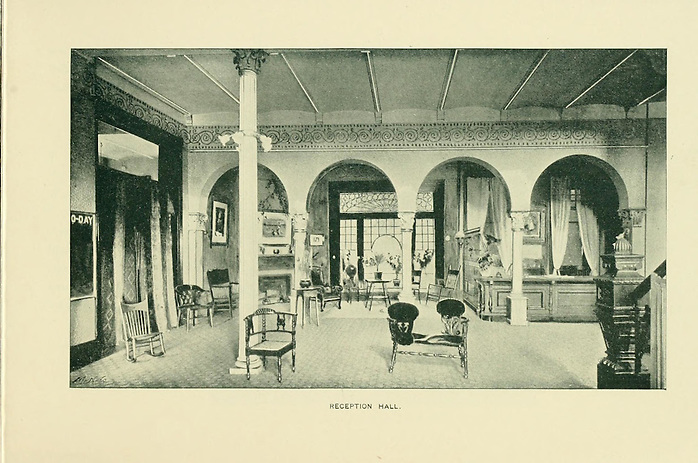 We immediately noticed that whatever material the floors may have been made out of at one time, now consisted of many inches of packed dust and dirt that revealed old footprints of other fellow urban explorers. 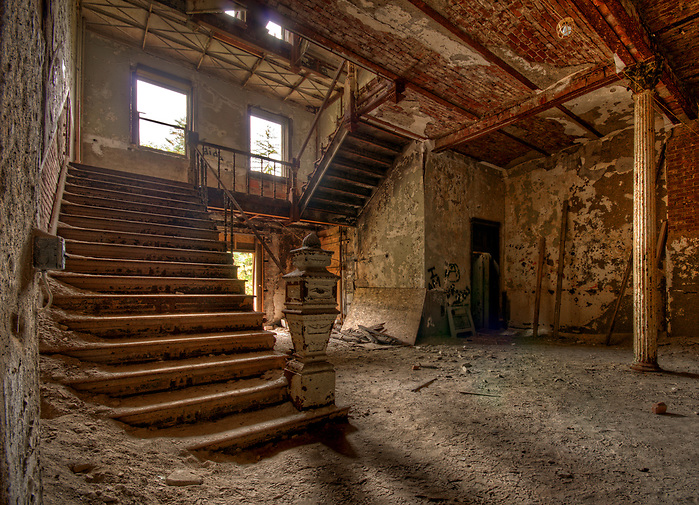 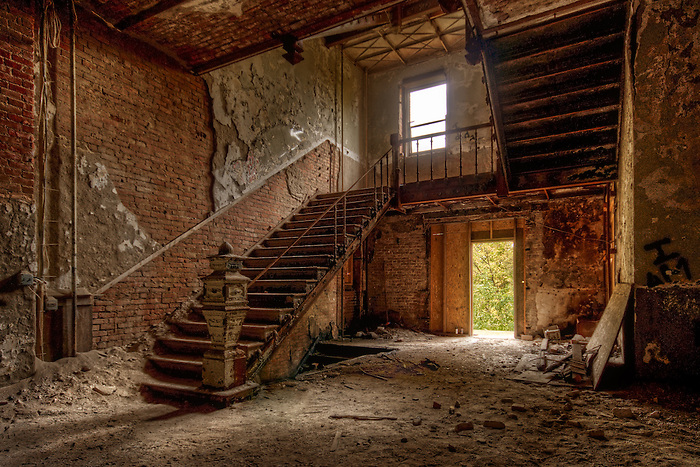 As we slowly walked around the lobby we could already taste the gritty dusty dirt that had become airborne as we paced around. We donned our masks and broke out the flashlights. Slowly we walked down the main downstairs hall, peeking in closets and old debris filled rooms with the narrow beams of our lights. The right hall ended in what must have been a large den or community room. All the first floor windows were boarded up tight, only allowing slivers of dim overcast light from the outside to enter.
We headed up the stairs to the second floor: 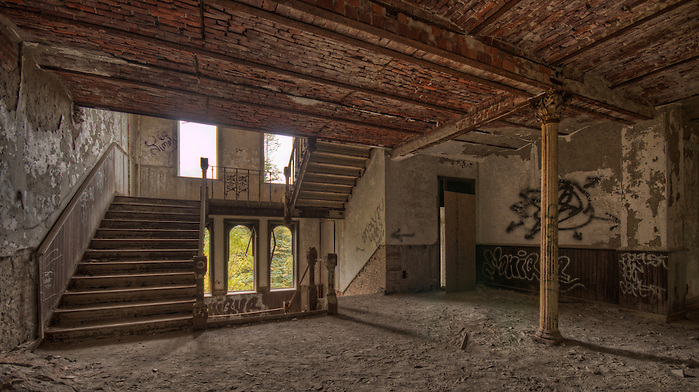 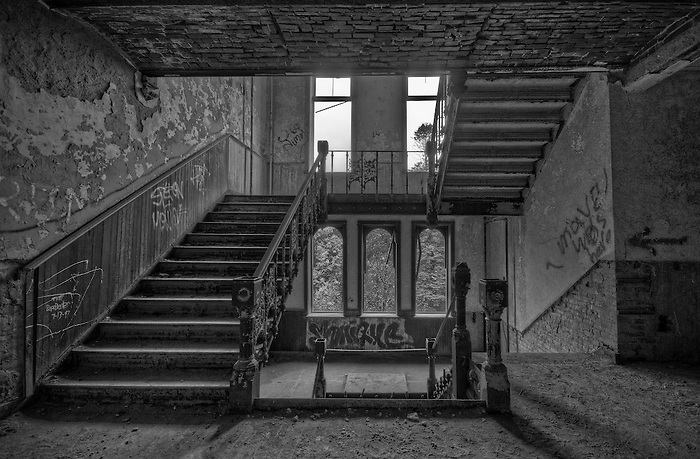 We began slowly walking down the main hall, looking in the old rooms. Many rooms were completely bare, some were in great condition, others looked like the floor or ceiling might collapse at any moment, and in others, the floor/ceiling actually HAD collapsed! We spent a good deal of time exploring the first three floors, shooting the beautiful decaying hallways, rooms, and objects that we found. 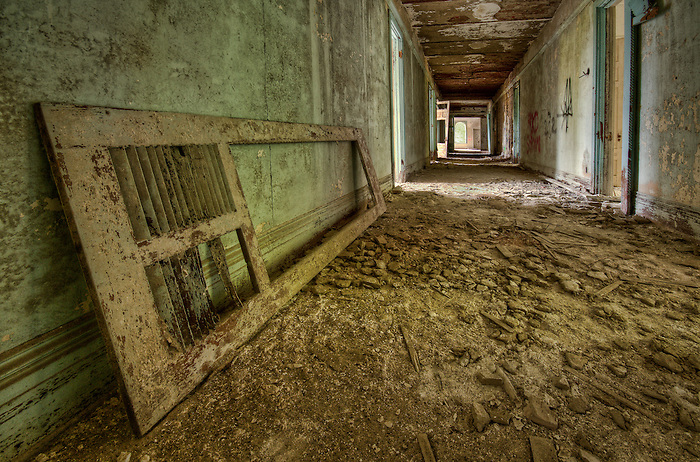 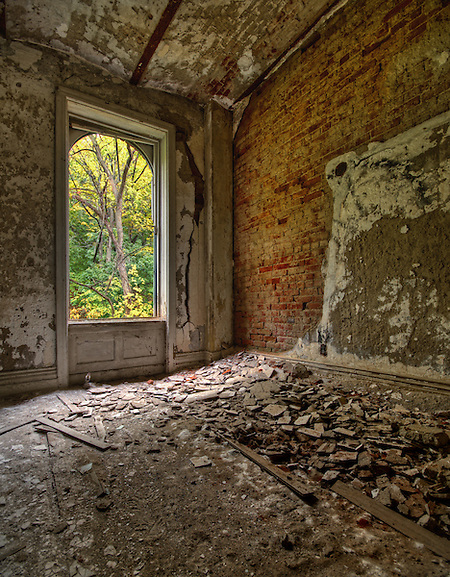 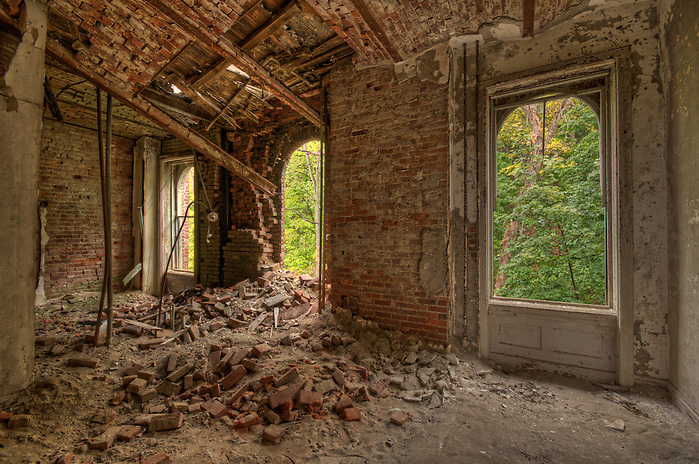 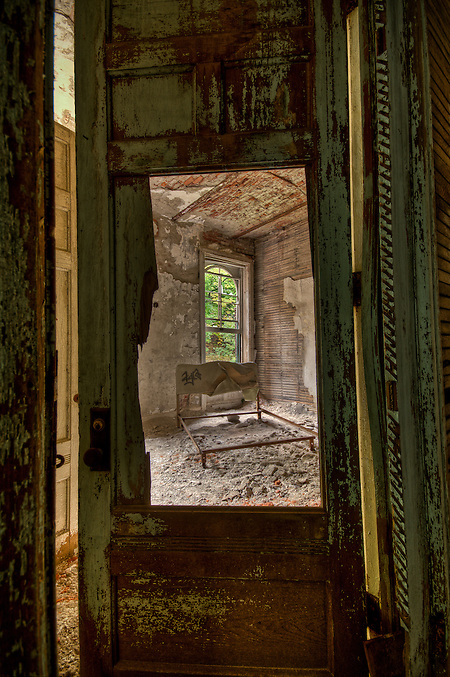 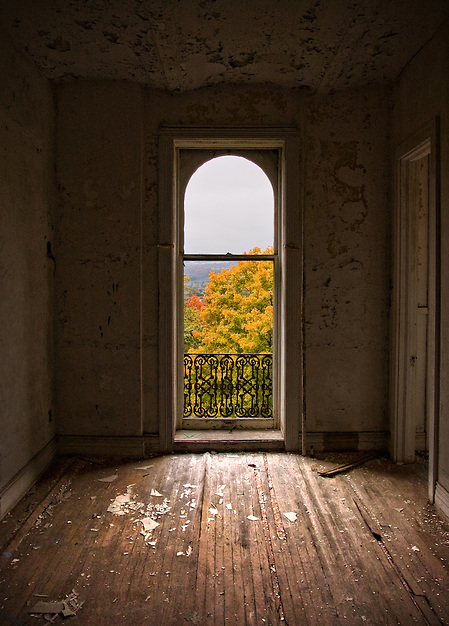 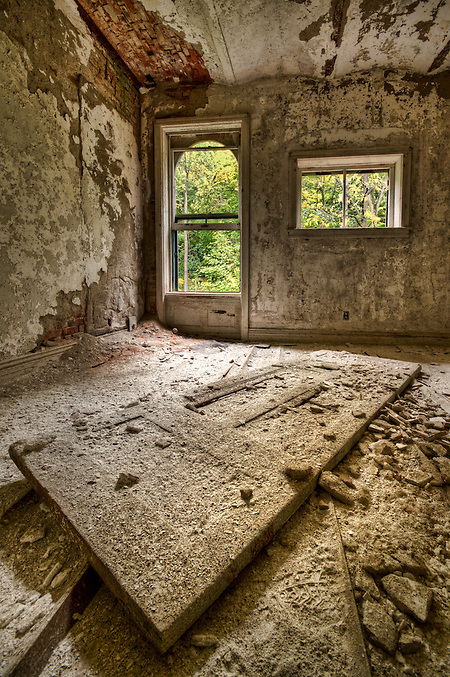 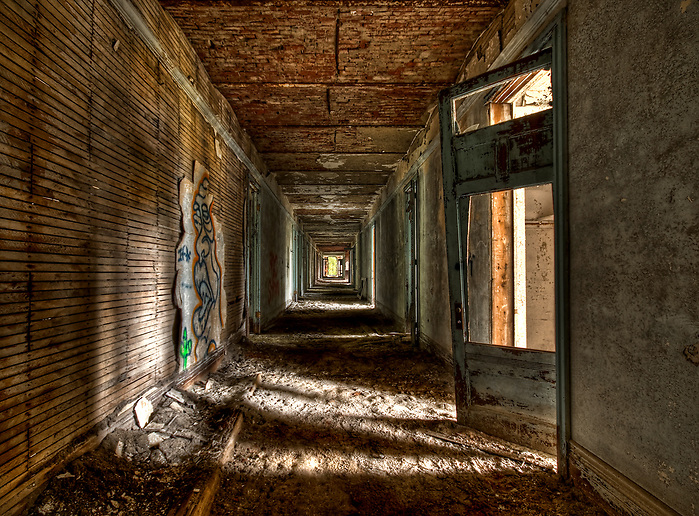 I had seen some pictures taken from the roof so I really wanted to find a way up there. Andy stayed below and shot some more scenes while I slowly ventured up the next three flights of ever-decaying stairs. The floors of the upper level seemed to progressively get less stable. I could feel soft areas all over the place and was very careful to move slowly and spread out my body weight as much as possible. As I arrived on the roof level I noticed the significant damage of the upper level rooms. Ceilings had collapsed, walls had fallen over, and there were signs of major fire damage all around. 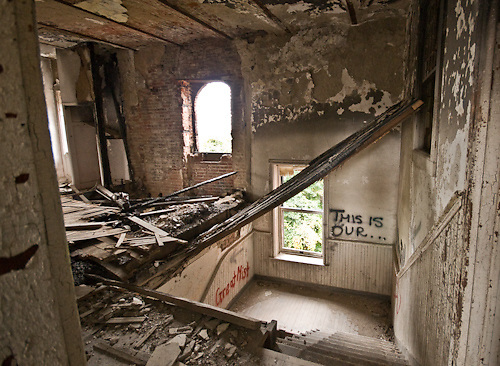 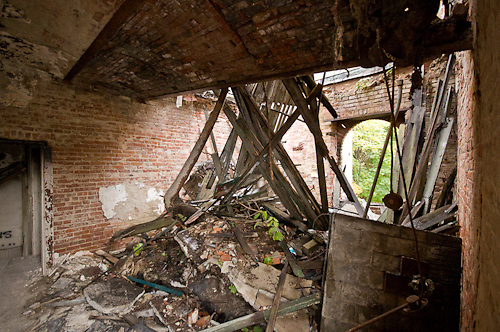 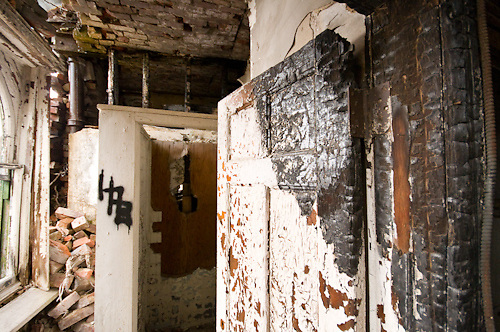 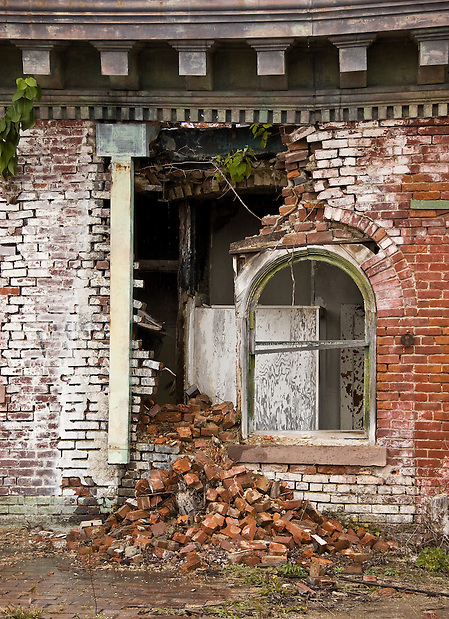 I emerged on the wide open roof and took in the breath taking panoramic view of Dansville NY.

I was alone, 6 stories up on the roof of a crumbling building, and my heart was racing with excitement! After hours of shooting and exploring the abandoned hallways and rooms of Jackson, I stood on the roof feeling victorious as if I had conquered a massive giant in battle!
A large tower still stood on top of the roof: 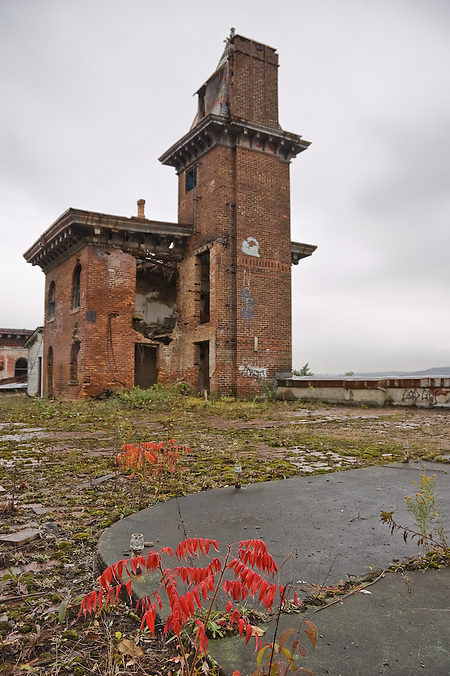 After taking in the view I headed back down to Andy.
We returned to the first floor and explored the left side of the building. We found a very large, long room lined on both sides with pillars. This was the old dining room. Boarded up windows lined either wall allowing the smallest slivers of light to pass through into the room. We set up our cameras at the entrance to the room and just had some fun running around with our flashlights and ‘light painting’. 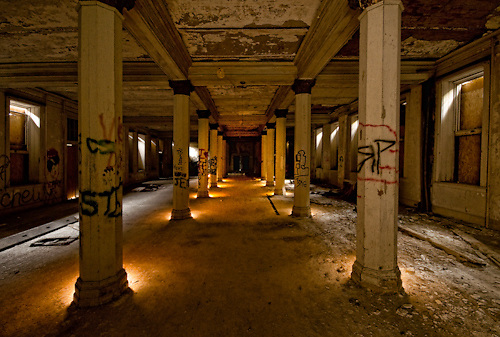 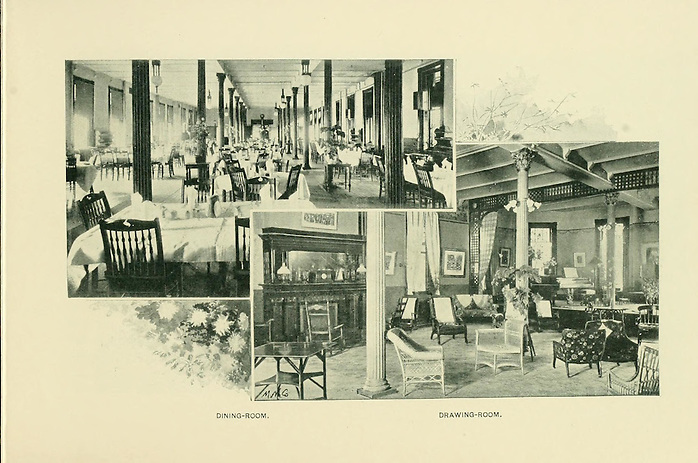 After exploring Jackson for at over two hours, we were chilled to the bone and wheezing from the dust we had breathed in. We packed our things and headed out of the building. We walked back to our car but not before stopping to turn around, and admire once more the giant, looming ruins, of the Castle on the Hill.
Ariel view of Jackson Sanatorium: 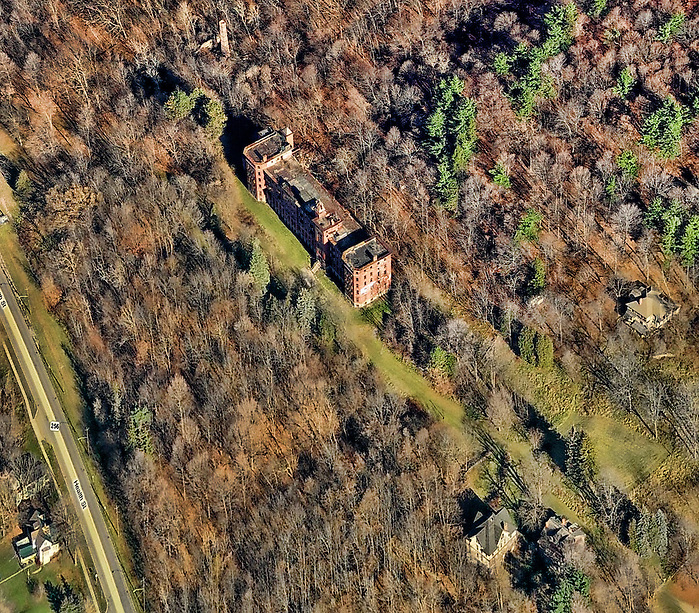 To view more of my work and purchase prints, head over to The Digital Mirage.